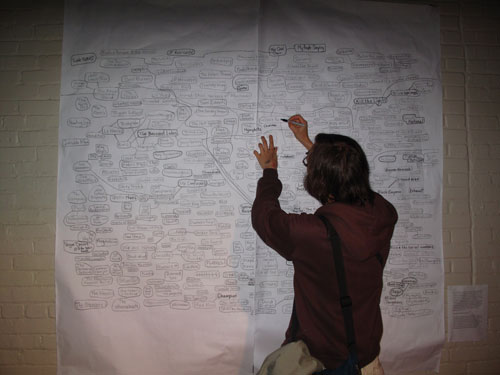 A map of Montreal's music scene. Photo by Kelly Ebbels.

On the first night of Pop Montreal, I left Il Motore after local kinetic-klezmer-whatever ensemble the Youjsh finished and before Bruce Peninsula started their headlining set. My friend Chase protested, “That’s like ordering cheesecake for dessert and then leaving before it arrives!” But I already know that I like Bruce Peninsula, I said. I need to find out whether I like Matt and Kim.

I think I got my answer. Matt and Kim are one of these unbearably sincere couplecore bands working in the boy-girl synth-drums vein. There is nothing like watching a happy pair play music together to make you feel inadequate about your own personal life. Songs like “Daylight” and “Silver Tiles” are finely crafted shards of pop, but what is sweet on record (or in a Bacardi commercial) can be grating live. When a grown man announces something like, “This is the best year of anything I’ve ever done in my life,” you’re not happy for him—you just wish he didn’t express himself like a teenager. Matt and Kim charged onstage to Notorious B.I.G.’s “Where Brooklyn At,” but the eponymous Matt seemed more likely to play an evangelical NBC page on 30 Rock than eat free pizza at the Alligator Lounge. His repeated exclamations of Oh my gosh didn’t help dispel the similarity.

Still, there is a certain threshold of cynicism the surly concertgoer reaches, after which he stops feeling smug and starts feeling left out. Throughout the show I stewed, wondering what was wrong with me that I couldn’t mirror the enthusiasm of the young, sweaty, visibly drunk audience. Several crowdsurfers nearly lost limbs in the ceiling fan. The floor seemed on the verge of collapse. I did chuckle a bit when Matt joked that Kanye West didn’t seem to mind their recent MTV award win. At that point a member of opening group Ninjasonik grabbed the mic and fumbled through a West imitation, forgetting the crucial Imma let you finish. Are Kanye West jokes still funny?

I’m just not in the mood, I told myself, as if snubbing a romantic advance. What bothered me most of all: Matt hogged the stage from the much more interesting, muscular Kim, stepping on top of her banter in the way male musicians often do with female bandmates. Perhaps their relationship is not so rosy after all.

This was Sister Suvi’s last show, and it felt exactly as it should. The crowd was small but big enough, the mood was happy, the venue was mirrored and more accustomed to hosting world music. (Sister Suvi’s Merrill Garbus began the show by chanting, “Violence in the Congo/violence in Nigeria/I steal your music,” a nod to her own African inspirations and the night’s setting.) They charged through their naked rock songs. Friends in the audience grinned and nodded along. It is a shame to lose Sister Suvi, but they have other venues—Tune-Yards will prosper in Garbus’ new California home, and Patrick Gregoire and Nico Dann also have worthy projects. Sister Suvi were a powerful combination, though, and this night was a fine goodbye. 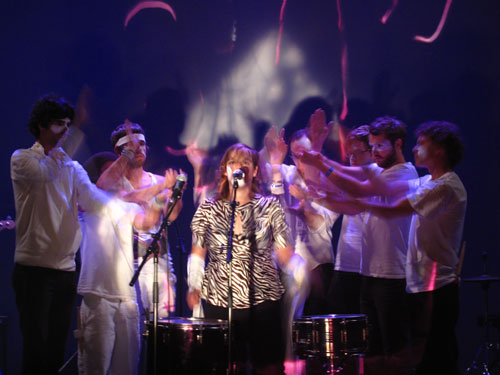 Tune-Yards at the Musée d’art contemporain. Photo by Kelly Ebbels.

I arrived a song or two into Fever Ray’s set, and she was halfway through “Concrete Walls.” It’s claustrophobic. “I live between concrete walls,” Karin Dreijer Andersson sings in a detuned baritone. “When I took her up, she was so warm.” Andersson wore a bizarre headdress that looked straight of out Where the Wild Things Are, a huge furry hood with horns. In any other context, it would have looked ridiculous, but watching her groan a kidnapper’s lament, wreathed in soft lighting, I began to feel genuinely, deeply uncomfortable. It’s not often a concert does that to you.

Though I spent the rest of the show willing the people in front of me to shut up—they only became enthusiastic during “Dry and Dusty” and the single “When I Grow Up”—my mouth was agape throughout. This was reportedly Pop Montreal’s second-most expensive show ever, and I heard the lasers alone cost thousands of dollars. (They were worth it, though I couldn’t help but laugh at the spate of iPhones that shot in the air the first time they made an appearance.) The force of Andersson’s songs means they can stand on their own, but in a venue the size of Metropolis, such accoutrements are welcome. The show ended with a deep, rippling bass hum that shook my entire body.

But I knew that Fever Ray would play precisely the same show the next night, in an undistinguishable venue in a new city—the same creepy costume, the same mirrored lasers. The following evening, at the Musée d’art contemporain, Tune-Yards delivered quite something else: the kind of show you know is not going to be played again.

Often, even huge, expensive shows played by acts you’ve been dying to see can’t compete with the familiar. (During Pop Montreal alone, I saw Tune-Yards perform in the record store Phonopolis and, as mentioned above, Garbus plays in Sister Suvi.) Tune-Yards’ excesses felt more organic—the slapdash costumes and makeup, the visuals created before your eyes on an overheard projector, the nervous smiles onstage. Watching friends and acquaintances perform is always charming, but when they create something of such crackle and surge, you feel not just warm but a little bit overtaken.

The similarities between the Fever Ray and Tune-Yards shows may seem spurious, but they stuck with me: both can only be described as spectacles, visual as well as aural experiences, dominated by strong women making warped pop music, one night after another. Fever Ray was unsettling, but it was Tune-Yards that stayed in my bones. Fever Ray didn’t even play an encore. At the end of the set, the entire Tune-Yards maelstrom paraded to the upstairs lobby, where some poor souls were stuck watching the show onscreen, and gave them a taste of what they’d missed.

Later that night, I told my friend Adam, who had played in the Tune-Yards backing band, that I enjoyed the show more than Fever Ray’s. “Wow,” he said. “I’m going to tell everybody that.”

My mind reeling from the Tune-Yards performance, my stomach full of Korean bibimbap, I made the mistake of going to see Destroyer. Dan Bejar is an undeniable talent, but the show confirmed my suspicion that he is a better bandleader than solo performer. His strengths—that cracked, sneering voice, those wry lyrics—are best displayed when collaborators cover up the weaknesses of his musicianship. Destroyer records are most interesting when they’re fleshed out; the New Pornographers need Neko Case; Swan Lake need Carey Mercer. Bejar strummed his acoustic as if he were playing to a disinterested coffeehouse, and I’m not convinced he wanted the audience there at all.

He certainly didn’t have much respect for his future listeners. “I only have two shows left,” Bejar said. “One of them is in Toronto”—pause for snickers—“so it doesn’t matter.” I’m not from Hogtown, but the first-year McGill students who laughed a little too hard likely were. Toronto-bashing has got to be Canada’s dullest national pastime.