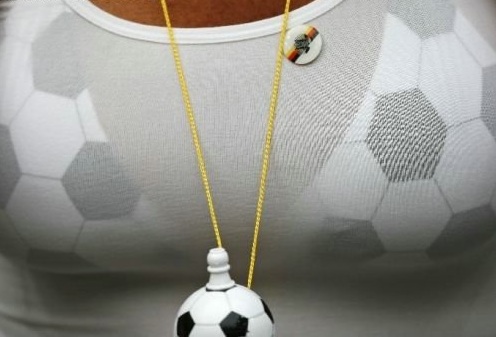 Any sports fan will tell you, you can’t win if you can’t score. When it comes to the World Cup, though, getting lucky often involves more than just filling the net. The global tournament—held every four years—has for some become synonymous with sex work, sexual tourism and human trafficking.

In fact, prior to the 2006 World Cup, Germany saw it fit to legalize prostitution, bestowing sex workers with the same rights as employees in other industries. This was done partly to gain some semblance of control, but also to dip into the increasingly lucrative “in and out” business, said to be worth roughly 14 billion Euros a year. Human rights groups quickly accused of them of being basically the worst people on earth, and claimed that 40,000 prostitutes would stream into Germany, sometimes freely, but mostly by force.

Joan Smith of the Independent, meanwhile, wrote that ‘the combination of sport, booze and sex” might promote violence against these “40,000 women being imported for the 'use' of visiting fans”. This importation of women never really happened, however, or at least, German police and border guards were unable to find it.

“Of the 33 investigation cases reported to the Federal Criminal Police Office on the grounds of human trafficking for the purpose of sexual exploitation…only five cases were assumed to have a direct link to the 2006 World Cup,” a report following the tournament concluded. Similarly, the expected sexual bonanza never truly materialized, with numerous brothels said to be disappointed with profits during the tournament. Of course, it may just be Germany. A recent Reader’s Digest survey in that country found only 5% of participants would choose sex over watching a German World Cup final game.

Nevertheless, this same figure—40,000—is now being bandied about in regards to the South African World Cup, with Eastern Europe, the long held “bread basket” for sex workers in Western Europe, again said to be “supplying” the workforce.

“It's horrific and very concerning,” David Bayever, deputy chair of the country's Central Drug Authority, told the Telegraph. South Africa intends on tightening border controls, though they also fear local girls may work the streets for tourists. Considering that 16% (5.7 million) of the country is said to be living with HIV, including 46% of sex workers, “horrific” is the right word. Some health advocacy groups, in fact, are worried that the tournament may actually increase the spread of the disease.

“Money talks, and if you're a sex worker then there is going to be money in South Africa in 2010,” Bayever concluded.

Nevertheless, some working in the industry feel that the country has missed out by not changing laws and creating safe areas where johns can get their kicks.

Germany changed its sex work laws before the World Cup, but in South Africa "that opportunity has been wasted,” sex work researcher Marlise Richter told Reuters.

“There are so many logistical and political issues inherent in the World Cup that sex work is very low on the agenda...it's politically much more expedient to ignore the problem than to deal with it head on.”

Dealing with it head on is exactly what various national teams are doing, coming forward with the usual dilemma: to boink or not to boink. In 2002, the Brazilian team abstained and won (the Italians and Nigerians, meanwhile, also stayed away from the nookie, and struggled). In 2006, both Ecuador and the Ukraine forced their players to stay chaste, with players from the latter allowed to reunite with their wives if they reached the semi-finals (they didn’t). This time out, English players will only be allowed a limited amount of time with wives following games, while the Argentinean national team actually took the time to announce that players would not be asked to abstain during the tournament.

This type of thinking has been around as long as sporting events, with the Ancient Greeks believing that sex was detrimental to an athlete’s performance in the Olympics. The thinking went that sex robbed men of energy, testosterone and aggression. In other words, “Women weaken legs,” as Mickey told Rocky.

There is, however, no conclusive evidence that sex the night before can affect your sporting performance, unless you count a reduction in anxiety and stress, both of which would seem to be positives in an event as big as the World Cup. Then again, scientists may just be they’re looking at the wrong thing. As former New York Yankees manager Casey Stengel once said: “It’s not the sex that wrecks these guys, it’s staying up all night looking for it.”