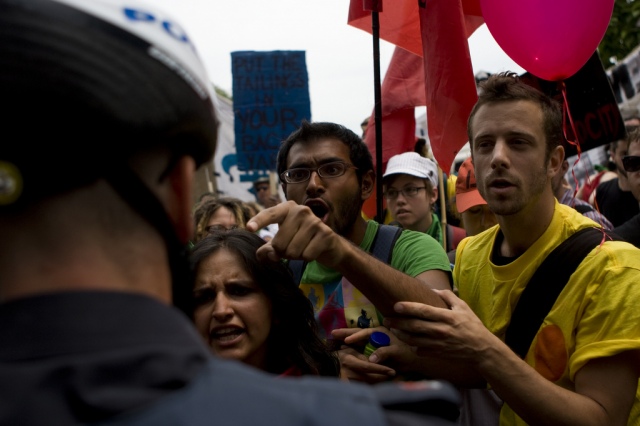 1) The Toronto lockdown is all the protesters’ fault.

Following 1999's spectacular demonstrations against the World Trade Organization in Seattle, and 2001's protests against the Summit of the Americas in Quebec City, international political meetings of this kind have almost exclusively been held in small resort communities. (In Canada, for recent examples, see the 2007 Security and Prosperity Partnership meeting in Montebello, Quebec and the 2002 G8 Summit in Kananaskis, Alberta.) Hosting the G20 Summit in Toronto, of all places, represents a strange reversal of this nearly decade-long trend.

Downtown Toronto has become, infamously, the bastard offspring of a ghost town and a war zone. This is called “security,” and you and I are paying for it, to the tune of, if I’m not mistaken, a bajillion dollars. (Need I even mention the mini-Muskoka?) There is little need for symbolism here, because the barriers are real; layers and layers of fences and cops, keeping the world’s leaders—including the dictator of a billion-person totalitarian state and a president at the helm of two major wars—separate from concerned citizens. The price tag, the unprecedented restrictions—this is the fault of our leaders, not the demonstrators, especially since, as Richard Poplak has suggested, Harper & Co. could have just used Skype.

2) The protesters are violent.

There’s no delicate way to say this, so I’ll just say it: property destruction is not violence. Call it vandalism, call it criminal, call it destructive, call it fun, call it “propaganda by deed” (if you’re old-school) or “a diversity of tactics” (if you’ve been paying attention), call it stupid, childish or divisive. Call it what it is, but don’t call it violence.

Fighting back against the cops is violent, but self-defense necessitates a bit of muscle-flexing—especially when you’re facing a police force bristling with sweeping new powers and an arsenal of postmodern war machinery.

3) The protesters don’t know what they want.

This isn’t technically a myth, because it’s true. The thousands of people converging on Toronto this weekend represent a broad cross-section of creeds, from liberal to radical, from large non-governmental organizations and unions to smaller community groups to anti-capitalist collectives. Of course there is disunity, and of course there is no single, coherent message emerging from the water-cannoned masses. The G8 and G20 themselves hardly present a unified front, squabbling as they are over bank taxes and austerity measures and climate change. And yet few accuse our leaders of meeting for the sake of meeting, as so many accuse demonstrators of protesting for the sake of protesting.