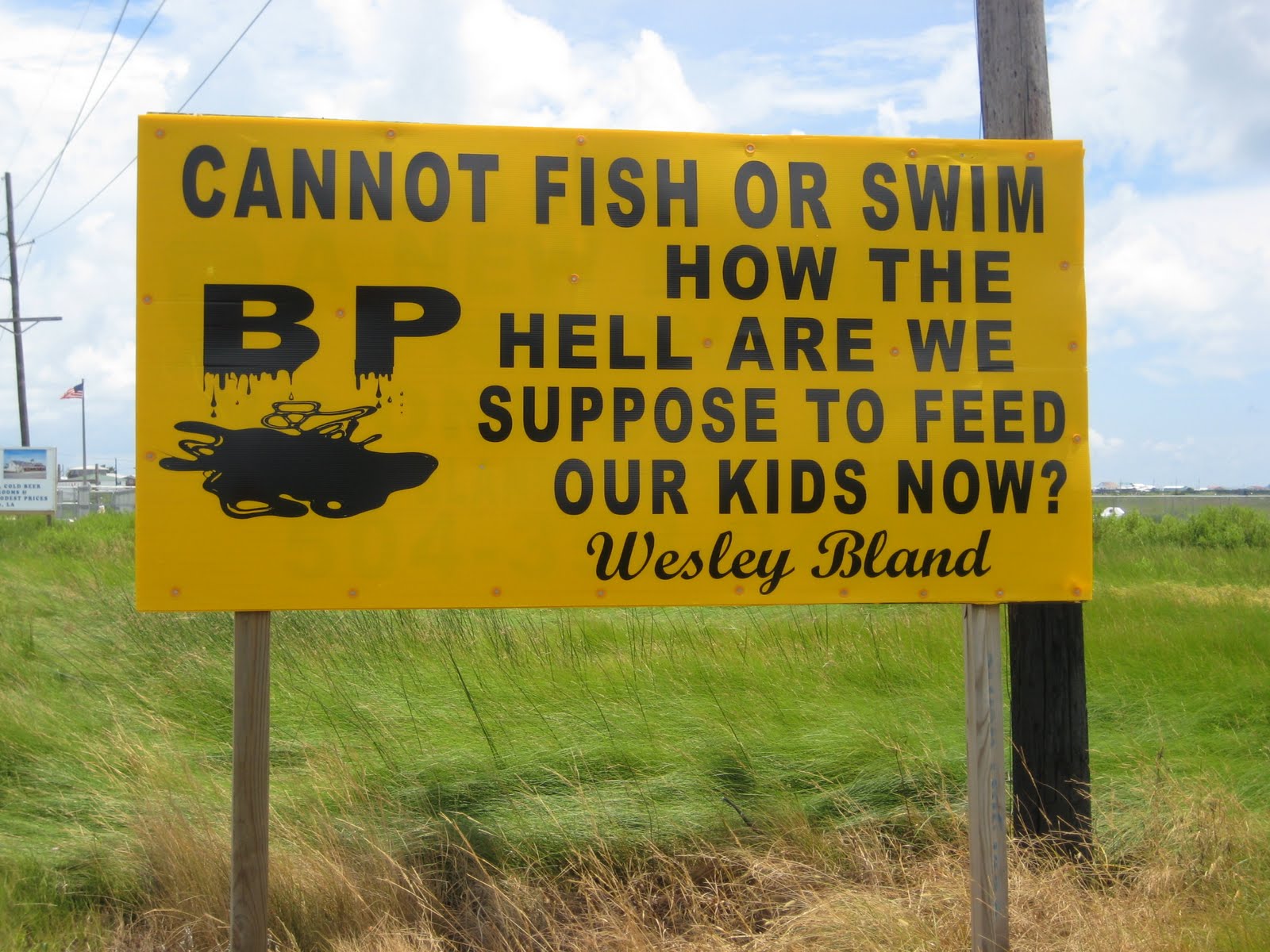 The well is plugged—"effectively dead"—nearly five months to the day after the explosion that killed eleven workers and spewed over 200 million gallons of oil into the Gulf.

Yes, BP is paying for everything: there is the $20 billion payout-to-come in the victims compensation fund, not to mention the however-many-billions from further government fines, lawsuits and legal fees. But the tab I got to see expand is the currently-$9.5 billion for the cleanup costs: all the white-suited hazmat men along the gulf shores shovelling oil balls into garbage bags; the small boats rented from now out-of-work fishing guides, both boat and guide hired as part of the Vessels of Opportunity Program (at a base $1500 per day); the ships, barges and base-camp flotillas for deepwater surveillance; the giant vacuums used to suck oil up from the water's surface (after which, onboard, oil and water are separated, the water pumped back into the gulf, the oil sent to be refined); the thousands of miles of boom lining the shore and the hundreds of trawler boats (many of which are also now out of regular work) used to transport them; the mesh of logistics and subcontractings of such vast proportions I can't begin to comprehend; right down to the breakfast, boxed-lunch, dinner and in-between snack-fuel for everyone involved from Panama Beach to Galveston.

How many millions has BP spent on Mountain Dew and Aquafina? (Yes, Naomi: This unnatural disaster sponsored by the Pepsi Corporation!) How much of the logistics for this cleanup has been subcontracted to Xe Services (formerly Blackwater), with their conveniently-close base of operations in Houma, Louisiana? Perhaps we'll never find out, or, perhaps, we will, but years after the money has been paid out and spent. Anyway, should it even matter with BP dishing out all of the cash (as opposed to, say, US taxpayers for the Katrina aftermath)?

Well, yes, especially if the reports—of the few still being published on the spill—keep ringing in that this really wasn't such a big deal, the Gulf will naturally recover: oil is, after all, a natural product of the earth. This being the din of conservative talk radio shows—national and local—across Southern airwaves, interspersed with the looped message from a BP spokesperson affirming that BP won't be able to keep "all the oil from coming ashore but [they'll] do everything [they] can to stop it," and this amidst nearly all of my interlocutors' knee-jerk accusations—Panama City Beach to Port Fourchon—that the problem with this whole oil spill lies with the federal government, and that any kind of federal regulation of the oil & gas industry will only make matters worse (read: a regurgitation of the conservative talk radio agenda), well, then, all of it sets the stage for BP's smiley retreat from the coast, a general "shucks, these things do happen" and jovial slap on the back from oil & gas lobbyists public and private across the world, meanwhile achieving nothing towards politicizing the practice of creating sustainable social and environmental risk-funds and impact assessments for these already-dodgy extraction techniques.

Of corporate responsibility, the absolute minimum will continue to be the standard. And when the money from 42 days of cleanup work—even at the handsome $1500/day—runs out and the fishing guide still can't fish his local waters, then what? One could ask the same question for tens of thousands of people across the Gulf, from shrimper to vacation-home owner to the guy who makes the burlap bags in which oysters are packed. Also: what of a storm, especially as we head into the thick of hurricane season, what happens when a tropical storms rolls in? It could be a third of the force of Katrina, but enough to stir up the water column and bring back to the surface that 100+ million gallons of oil that have not yet been scooped or suctioned up, and believed by many to have evaporated, hallelujah!

Driving along the Gulf of Mexico, stopping in each town, walking along each beach or sanctuary, sifting through the still-present impact of Katrina on this coast, shrimping and crabbing on the bayou with a crew of bawdy Cajuns, placing my practice of poetry within the confines of the media (well, the poet as medium via Yeats and Spicer) to go on every Coast Guard media tour I could, and getting out on those rig-dotted waters, I could not help but imagine a spill happening in another place where the people lived such existences wholly dependent upon the health of a body of water or state of land. The Mackenzie Delta came to mind, and the whole upstream track of it that is being divvied up by many of the same companies busy now along the Gulf. The downstream flow of the Slave River from Fort McMurray and the Tar Sands towards Great Slave Lake was another place, this one already wavering on the brink of a disaster. I imagined a spill of this magnitude taking place on the waters near Tuktoyaktuk, a place where the bounty of logistic support needed to respond to such a mess is far from present and more than difficult to mobilize, not to mention the weather conditions being far more severe than that of a Gulf summer. I thought of the remoteness of this place, how inaccessible or unaffordable it might be for less-than-mainstream reportage, and how the reports that did get out would be oh, it's not too bad, it's all natural, everything will be back to normal soon, meanwhile upper management and their investors swagger on to the next location.

Michael Nardone lives in the Northwest Territories. He transcribes for PennSound and Jacket2.

—Mud and Butterflies
—Disaster Myths
—Notes From a Stranded Publisher