Recently returned from a brief jaunt to Toronto, which has me thinking about walking cities and psychogeography, and my own obsession with the poetics of the urban landscape. I am always seeking to characterize & form a relationship with the city I am in, always checking street signs, counting critters, committing frottage on the buildings.

Toronto might be the perfect locale for such musings, as evidenced by this group. Murmurs and tracings on sidewalk and corner.

The poet that comes to mind is of course Frank O'Hara, with his catalogue of New York City walking circa 1960. A friend once remarked that my "exurbia" poems (found in [sic]) were in homage to O'Hara's Lunch Poems, suggesting that mine should be titled "Breakfast Poems." ("You're just as hungover, but it's earlier in the day.") 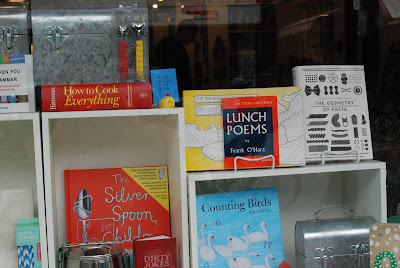 Meredith Quartermain and Lisa Robertson provide poetic templates for moving through Vancouver, as does Oana Avasilichioaei (whom I've mentioned in this space before). I'm not certain that Toronto, with its psychogeographical societies and flanerie books, has produce the same kind of spatio-poetic interventions (please correct me if I'm wrong.)

Because, as Trevor Boddy argues in a 2005 issue of Vancouver Review, "Canada’s largest city never generated “Torontism,”" though the export of "Vancouverism" has been underway for some time now. (Read the review essay; he succinctly encapsulates Vancouver's character.)

There will never be “Torontism” because that city is not a one-liner, but a place that does many things, some of them very well.

Vancouver does one thing well: We build condos higher and denser than any other spot on the continent, and our global reputation is currently being set by these acts. Because of our downtown peninsula’s love affair with tall, thin towers on townhouse bases, Vancouverism is replacing Manhattanism as the maximum power setting of contemporary city building. By some analyses, the average number of people living per hectare in our central core is now higher than that of the famous island in the Hudson.

Quartermain takes us back through the city before the tall, thin towers erected.

Nikki Reimer is the author of one book of poetry, [sic]. She lives in Vancouver and is a member of the Kootenay School of Writing collective.