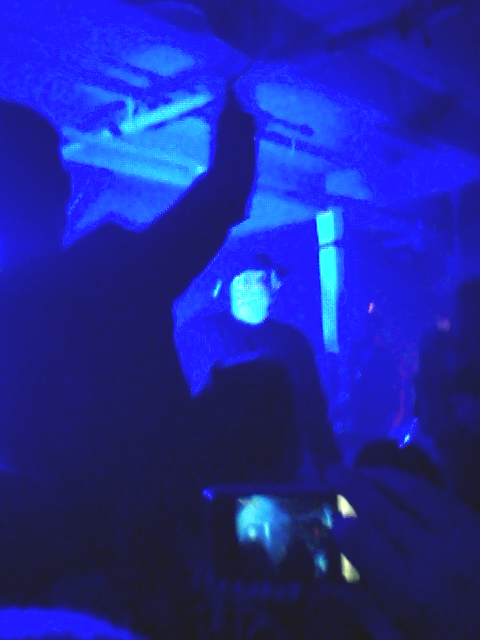 John Cage once said, "I believe that the use of noise to make music will continue and increase until we reach a music produced through the aid of electrical instruments which will make available for musical purposes any and all sounds that can be heard." We reached that point a long while ago—we can now record and manipulate any noise on earth—but Western music still sounds largely as it did at the height of Cage's weirdo powers. Even when it isn't straightforward pop, or when it uses found sounds, or when it's outright noise music, it still has elements that strike us as familiar: tones and semitones that please our European-influenced ears. Music still sounds like music. The difference is that we have many more of Cage's "electrical instruments"—we have many more machines with which to make sounds.

This year's Pop Montreal festival represented, in my mind, a sort of rise of the machines. We are no longer in the 1970s and eighties, when wannabe guitar gods sneered at the use of innovations like the synthesizer and the Theremin. We got grunge out of our systems in the nineties. It is by now a cliché to talk about eighties-aesthetic revivalism. We have reached a remarkable point precisely because of how unremarkable we now find the omnipresence of instruments that, on the scale of musical history, are relatively recent inventions: synths, sequencers, samplers, laptops, drum machines. Nearly every time I attended a concert last weekend, this digital spectre raised itself. "When did bands start playing along to backing tracks?" author Jacob Wren asked in Art Pop's Palimpsest Daily. "Suddenly I'm seeing it all the time."

After we saw Bear in Heaven (La Sala Rossa, September 30), my friend Duncan—a musician I admire—remarked that he used to dismiss the use of samplers and other electronic doo-dads until he began to fiddle with them himself, at which point he realized how challenging they were. I suspect that a lot of musicians feel the same way. As I watched Bear in Heaven, I was disappointed when I realized that the chugging synth line of "Lovesick Teenagers" was snaking from a Roland SP-404. Then I wondered why I was disappointed, as if watching some moustachioed dude from Brooklyn press buttons on one kind of machine is innately more captivating than watching him press buttons on another machine. For all their supposed cheating, Bear in Heaven were no less dense or muscular.

Duncan and I decided that the problem was one of aural visibility—the disconnect between hearing a sound and actually seeing how it is made. Even when a guitar is mediated by layers of effects, you can see, in concert, when a player hits the strings. But the guy hunched over his MacBook baffles us. He is just pressing enter, we say, though really we have no idea what the hell he might be doing.

It is important to us that those on stage play real instruments and do real things because live music is Authentic. We do not even like it when pop stars lip synch. Although the crowd at Holy Fuck (Espace Réunion, September 30) was sweaty and boisterous the entire show, I couldn't help but notice that the loudest cheer was reserved for when Brian Borcherdt left his effects table and strapped on a guitar. Microphones and guitars are machines too, though, and just because they are more phallic than a sampler doesn't mean they are more meaningful.

More than any other act last weekend, the xx (Place des Arts, October 1) illustrated the worthiness of the digital musician. Jamie Smith, who produced the band's debut album, is a far better player than Romy Madley Croft or Oliver Sim, and all he does is hit electronic drum pads while his bandmates struggle on guitar and bass. It's not what you play but how you play it. That sounds obvious but it isn't, not to all the mediocre guitarists (like me, for example) who still think they're superior to turntablists.

Art-punk legends Les Savy Fav (Espace Réunion, October 1) are as decidedly un-digital as a band can get. During their show a crowdsurfer kicked my glasses off in the moshpit, and after I recovered them I went into the empty room next door to catch my breath. Then Tim Harrington, the band's intimidatingly-bearded and generally shirtless singer, wandered up next to me, still singing into his mic, and kneeled down. I poured my beer into his mouth. Foam dribbled down his mane. I had been thinking about machines a lot at this point, and for a moment I imagined some not-so-distant future concert in which I poured fermented lubricant down the mechanical maw of a charismatic, antic singer-robot, and it didn't seem like such a bad thing. Then again, it was 3:00 a.m.