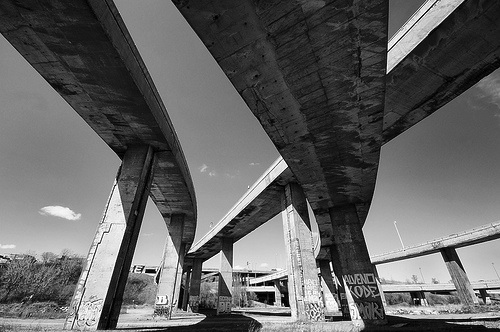 Yesterday morning, the Ministère des Transports du Québec (MTQ) held a press conference during which Transport Minister Sam Hamad presented a revised, $3 billion plan for the restoration of the decrepit Turcot Interchange. This plan comes after the MTQ was forced to “go back to the drawing board” by a Bureau d’audiences publiques sur l’environnement (BAPE) report that was extremely critical of the initial plan’s lack of public transportation infrastructure and its plans to expropriate hundreds St. Henri homes. But the MTQ’s new plan is a disappointment to local stakeholders, many of whom see little evidence that the ministry listened to BAPE recommendations. A few hours after the announcement, Shannon Franssen, a spokesperson for Mobilisation Turcot, a network of community members who oppose the province’s plans for the Turcot, spoke with Maisonneuve about why the group opposes the revised plan.

Amelia Schonbek: What did Mobilisation Turcot hope to see in the MTQ plan that was announced today?

AS: Could you walk us through the positives and negatives, from your perspective, of the plan that was actually presented?

SF: Certainly in terms of traffic flow, the [MTQ] has been very clear that they have no intention whatsoever of reducing the traffic flow through the Turcot, so there will be as much air pollution. This is something that’s a huge negative for the citizens that are just adjacent to the Turcot, because it really puts their health at risk. The public health department has been very clear about the fact that living so close to such a high volume highway is very dangerous for citizens; there’s reduced life expectancy, respiratory diseases, cancers that are caused by air pollution and dangerous particles in the air. So this was one thing that was very disappointing, and definitely a serious problem with the plan.

There’s also the fact that, as I was saying, this is going to cause more isolation for the neighbourhoods [surrounding the Turcot]. Another thing I’ll mention with respect to traffic flow is that there was a nod at the idea of increasing public transit through the Turcot, but what was proposed is not nearly sufficient. What we expected to see what a very forward-looking plan that takes into account that we are currently in a global environmental crisis, in terms of global warming. We expected to see something, not even more innovative, just basic strategies to reduce traffic flow and increase public transit, and what’s been proposed is so minimal. We had really expected to see much much more public transit infrastructure, much more accommodation for bus lanes, an eventual tramway… but this wasn’t part of the plan.

AS: Is there any evidence that the MTQ took the BAPE report into consideration as they were drafting this plan?

SF: There are indications that they did the absolute minimum that they would need to do in order to be able to build a communications strategy where they could say, “okay, we took these 39 recommendations into consideration.” But what’s actually happened was so minimal that, no, we can’t really say that they’ve done all that much. What we saw today was essentially the same plan, with a few bells and whistles that made it seem like they had taken things into consideration. For example, with the expropriation and demolition that was planned, they did reduce what they had originally planned—the original plan calls for many more demolitions and expropriations. But what we had hoped to see was none, and in fact it’s not necessary for there to be any expropriations whatsoever. But what we saw today is that were will be about 110 citizens that will lose their homes. So, the MTQ can say, “well, we took that into consideration,” because there are less, but it’s obviously still way too many, and they didn’t really take into consideration the needs of the population of St. Henri and the people who live around the Turcot.

AS: When the MTQ’s original plan was released in 2007, there was a lot of criticism of the fact that it encouraged urban sprawl. Can you explain that connection, and the extent to which it’s still a problem in this revised plan?

SF: There’s no plan whatsoever to reduce traffic flow through the Turcot Interchange. It’s sort of equivalent to saying to people, “go, move into the suburbs, because we’re going to do all that we can to make sure that you can drive your own individual automobile into the city. And this is of course contributing to urban sprawl; one of the main reasons why people would want to live closer to downtown is that [public] transportation is so much easier. If there are very open roads to the suburbs, then of course people will use them We understand that it’s quite important for there to be good access, good roads coming into the city, we just think that if we keep building bigger roads, there will keep being more traffic, and more traffic jams. This is something that can be seen all over North America: when we build larger roads, more cars come. But when governments have had the political will to reduce the capacity of major highways coming into the city and to provide public transportation infrastructure, what we see is that people use that infrastructure more, transportation becomes much more efficient, and it does encourage people to stay downtown too.

AS: You said that Mobilisation Turcot was hoping to see a plan that didn’t bring the highway down to ground level; can you talk about why lowering the roads is problematic?

SF: The isolation of neighbourhoods is a big [problem]. When roads are on the ground, they create a barrier that prevents people from getting in and out of the neighbourhoods. This is a problem in terms of people’s ability to access public transit, and people’s ability to have active transport strategies like bicycling or walking. It causes people to have to use personal automobiles more and more. And it [stifles] free exchange between neighbourhoods.

What’s also a problem is ground-level pollution. When they build [roads] on the ground, all the pollution that comes from the highways really affects the population much more. Because this highway is built so close to residential areas, having the highway built on the ground is really a major health concern.

AS: We’ve been talking a lot about the isolation of neighbourhoods, and I’d like to discuss the way in which you think St. Henri’s socioeconomic makeup has influenced the way that these plans for the Turcot have been developed and pushed forward?

SF: It’s no secret that St. Henri is one of the poorest neighbourhoods in Montreal. The life expectancy of people living close to the Turcot  and the major highways around that area is lower than in the rest of Montreal. The public health department has said that this is due to the pollution that they are living close to. We know that environmental issues are not just about pollution; they’re also about social justice and economic justice. So when a population is suffering from economic and social injustice, they’re more easily exploited, and certainly, I don’t think it’s any accident that the Ministry of Transportation feels that they can push through such an unjust plan, because they know that the citizens who are going to be most affected by this plan and who are going to be liable to mobilize the most are also citizens who are the poorest, have the least resources, have the least access to people in power.

AS: Along those lines, let’s talk about all the politicking that has been on display throughout this process, and the clashes between the municipal government and the provincial government.

SF: Certainly in the long life of this project—it’s been three years that people have been mobilizing to have a project that represents the needs of the people in St. Henri and the citizens of Montreal—we’ve seen the city try to take a stand to have a project that would have zero expropriation, that would not be built on the ground, that would reduce traffic flow. Even though there was a consensus in the city to insist that the Turcot project meet at least those three criteria, we saw that Mayor Tremblay really folded in front of the MTQ. He came out in support of their project despite there being consensus among elected officials in the city to not accept such a plan. So there is definitely a struggle between the needs of the citizens of Montreal —and what their elected officials are willing to fight for—and what’s coming down from a higher level of government that’s more concerned with economics, less concerned with listening to citizens on the ground level, more concerned with pushing through projects that meet their own ends. We saw today that Mayor Tremblay was incapable of representing the citizens of Montreal, and that’s a big concern for us. When an elected official at the city level can’t fight for the citizens, we have one less resource in our pocket to have a political voice.

We really feel, as citizens of the South-West, that not only we are not be listened to, but our elected officials aren’t [being given] an opportunity to express their dissent with this project. This is a serious concern; we feel like the MTQ and the Charest government have really done everything in their power to make sure that this project is not one that takes into account the needs of the citizens of Montreal, and that they way that this project was developed was totally undemocratic. When even elected officials aren’t allowed to be present at a press conference [as was the case with several members of the South-West borough], we really have a serious questions about the respect for the democratic process by the provincial government.

AS: So now that you’ve heard today’s announcement, what will Mobilisation Turcot’s strategy be going forward?

SF: I think we need time to respond to what has happened. But there will be a response. Even this Thursday there’s a public action planned, in order to show a rapid response to the announcement. We think that it’s really essential that we get the message out that the citizens of the South-West and the citizens of Montreal are not going to accept this kind of plan.

AS: What will the implications be if things go ahead according to the plan that was announced today?

We hope that the City of Montreal will take a stand; we’re still hopeful that that will happen, especially when they realize that there will be a massive citizen response to this plan. We hope that the Ministry of Transportation will change the plan in response to that citizen outrage, because the implications are so serious for our city if the plan goes ahead. In terms of public health, in terms of the isolation of communities and the continued impoverishment of those communities, and in terms of our ability to move forward in our urban planning strategy.

—I Dream a Highway
—The Conversationalist: Interview with Shauna Janssen
—Vintage Aerial Views of Montreal