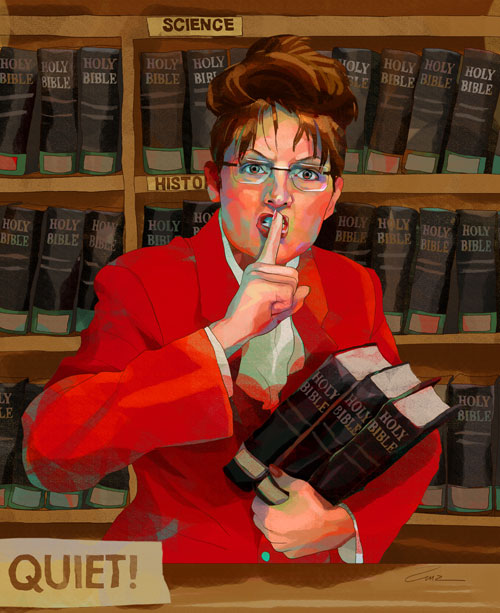 Here is Sarah Palin on her current reading habits:

"There's nothing different today than there was in the last 43 years of my life since I first started reading. I continue to read all that I can get my hands on—and reading biographies of, yes, Thatcher for instance, and of course Reagan and the John Adams letters, and I'm just thinking of a couple that are on my bedside, I go back to C.S. Lewis for inspiration, there's such a variety, because books have always been important in my life." She went on: "I'm reading [the conservative radio host] Mark Levin's book; I'll get ahold of Glenn Beck's new book—and now because I'm opening up," she finished warily, "I'm afraid I'm going to get reporters saying, Oh, she only reads books by Glenn Beck."

First of all, this is all bullshit, but not just because everything that comes out of Palin's mouth is bullshit (though that is true), but because Palin is someone with a schedule crammed with daily interviews, fundraising, conference calls, strategy sessions, and meetings with image consultants and political managers. She must also put aside time to promote her new eight-part infomercial, as well as turn out to support her daughter on that dancing show. When all that is done, and there are no animals to shoot or fish to be snatched out of the water bare-handed—you know, like a grizzly would—then Palin must also squeeze in a minute or two to help raise her large family, which includes a toddler with special needs. Filipino nannies are not exactly thick on the ground up there in Alaska.

You can call her a cynical, thin-skinned, corrupt, hypocritical, and ideologically thuggish embarrassment spurred on by nothing more than greed, self-regard, and a vampire-like hunger for attention—but don't call her idle. She is busy, busy, busy, and as such, probably has precisely zero time to read anything longer than a tweet or a Facebook update.

As an author and an all-around books guy—with all the petty resentment, agoraphobia, and sense of entitlement that implies—I should now be expected to chuckle haughtily at Palin's claims of well-readedness. But here's the thing: I don't care if Palin doesn't happen to read any hefty tomes in the five or six minutes of free time she has left over in a day. I have a part-time job, zero public stature, and only two (blessedly healthy) kids, and even I cross myself at the sight of a book that pushes the 400-page mark. (Thanks a lot, Mr Foran...) If someone with as busy a schedule as Palin's can't actually find the time or energy for the collected letters of her supposed political heroes, that's entirely understandable. I've been meaning to re-read Anna Karanina for a while now, but every time I pull it off the shelf, some part of my mind says fuck that shit and reaches for something slimmer.

Palin's a liar, sure, and a pretty bad one, but why does she feel she needs to lie in the first place? Well, because we demand that politicians display such cultural signifiers. Books = smart. Books = gravitas. Books = seriousness. Witness (and I swear I will try not to reference this here anymore) Yann Martel's ongoing unilateral book club, which might as well be re-titled Haught or Not? Just as we want our leaders to demonstrate some level of cultural hipness (What does Ms Palin think of Bieber's big win at the AMAs? What's on her iPod? Does she think Glee has fallen off this season?), we want the other side of the coin covered, too. We want fireplaces and wingback chairs and leather-bound volumes and Vivaldi's Four Seasons.

This speaks to an enormous amount of cultural anxiety, as well as at least a small serving of class-lensed elitism. The fact is, books also = a certain amount of spare time. I am certain that Palin has a team of researchers combing the letters of Reagan and Adams for possible quotes to be used in interviews and speeches, but cozying up with them herself at the end of a long, long, Alaskan day? Bullshit. My guess is that most high-profile politicians feel they are doing well if they can put aside the briefing notes long enough to read Get Shorty for the fifth time while on a red-eye to Los Angeles.

And so what? Obviously, I think anyone who is so politically influential should read widely and be familiar with modes of thinking that can only be achieved through long immersion in perfect-bound texts, and I like the idea of a politician who sees reading serious books as a necessary component of being in a position of power, but I don't actually expect them to be sitting up until 5 am with a flashlight under the bedsheets, tracing the fall of the Roman Empire or Leopold Bloom's progress across Dublin, even as half-a-dozen morning show hosts are warming the mikes for them.

That Palin would try to represent herself as a voracious reader is laughable and not at all surprising. That we should care either way is just kind of dumb. There are, after all, many other reasons to despise her and everything she stands for than just her non-existent reading habits.

—What is Yann Martel Thinking?
—A Letter to Maclean's From a Concerned Asian Parent
—Interview With Charles Foran