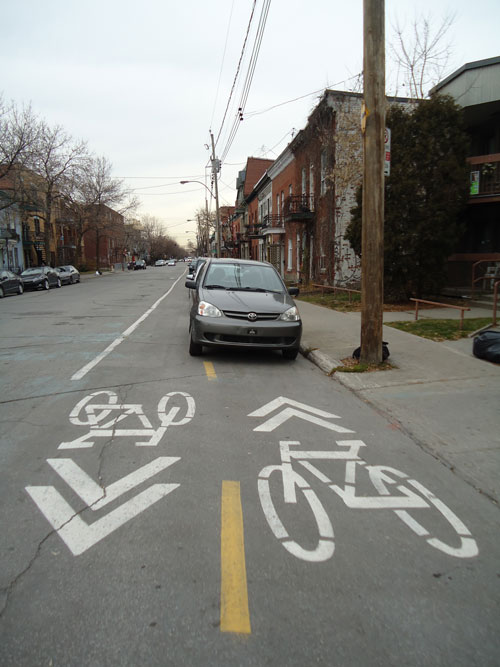 One night just before the holidays a fellow Montreal Plateau-dweller accosted me outside my apartment for the dangerous, selfish and morally deplorable act I would soon commit. Which is to say, I was about to ride my bike.

As we walked past each other on the sidewalk, her frustrations came to a boil: "You really think it's okay to ride your bike in December!?" she asked in French, adding, "If I was your mother, I'd..." and though I didn't catch the expression, her tone was clear: she'd fuckin' set me straight, is what.

Fifteen minutes later, she was affectionately rubbing my arm and wishing me a Merry Christmas.

That first question caught me completely off guard, and worse, it totally killed my bicycle nerdery buzz. (At the time, I had a rim hanging off my posenger bag, since I was on my way to a bike co-op to build myself a new back wheel.) I thought of drivers digging themselves out from under six feet of snow, idling for ages as they scrape the ice off their windshields, and having to respond to the truck's piercing siren before snow removal got under way. Are you sincerely asking what makes sense?

All I could manage was, "It's a mode of transport, just like yours...we have to respect each other," in my best québéfrançais. Sure, she said, before telling me that bikes are in fact more dangerous than cars. Here goes the logic: driver doesn't see bike, driver hits bike, it's still the driver's fault (thus driver is true victim, needs coddling). Further, driver is safe inside their car while injured cyclist-perpetrator costs health care system untold billions.

Health costs? A rolodex of health issues related to cars and our structural dependence on them spun 'round and 'round in my head. Skyrocketing rates of obesity, cancers and respiratory illness linked to air pollution, drunk driving deaths... I landed on what I considered to be the timeliest example: "Today was a smog day!" I said, foolishly thinking she could put the pieces together. Instead, she went on some rant about the futility of reusable shopping bags.

Which led her to her next point. My neighbour did a lot of errands that day. No way she could've done that by walking and taking transit! And hey, me too! So we finally had something in common: we're both too impatient to wait for the bus. Great.

Speaking of common ground, our conversation was only made possible by the fact that, at that exact moment, we weren't occupying the vehicular roles we so staunchly defend, since we were both on foot. And while there were other differences at play—age, gender, language—they were all trumped by how we choose to get around the city. And that, I think, says a lot about how tense transportation issues are in Montreal.

The first breakthrough I made with my impassioned driver-neighbour came when I pointed out that the population density of our neighbourhood means that only a minority will ever drive.  As results from the AMT's 2008 origin-destination survey show, two-thirds of the trips made in the Plateau are made by foot, bike, or transit. (Predictably, as you move away from the mountain, the scales tip toward car dependence.) The south side of our small block, for instance, is home to eight sets of triplexes, each with two to four residents, or about fifty to one hundred people in total. There are no more than twelve parking spots in front, with about a half-dozen in the alley behind the street. If everyone drove, parking problems would be worse, traffic would be worse...yeah, yeah, she said.

To me, she was freely admitting that the car's time as a democratizing force was a thing of the past. In cities, the car largely serves to reinforce its own power, its own control of public space. The driver invests so much in the actual vehicle, the insurance, the gas, the parking—paying to the king of the road, only to be "stuck" behind someone operating an infinitely more efficient, affordable and vulnerable vehicle. This is the frustration that pains my neighbour. Apparently it's very, very frustrating.

Even as the mood between us lightened, her central concern came down to this: it's winter now, can't you just walk and take transit? No. I need my bike just like you need your car. And so we stood, two people attached to the needs we'd created for ourselves.

After the first dozen-ish minutes of our conversation, something changed. Motherliness made a comeback, as she asked me if I told my mom that I ride my bike in the winter. Except, in this context, it sounded like she was asking me, "Have you told your mother that you smoke meth / put your cat in the microwave / are on the run for a string of nursery school arsons?"

Yes, I said, she knows I love bikes. A smile on the other end. Then she asked me if I was from Quebec, and after I gave her the obvious answer, she jokingly responded, "En plus, j'chuis raciste!"

All I had to do was humanize myself, and voilà, I was able to avoid further vitriol. And she became a little more pleasant, too. Like any label, the ones we attach ourselves to vis-à-vis our transit habits are probably inhibiting us from engaging with other people who have a stake in the inherently messy issues around urban transportation.

In the end, my neighbour told me to get some lights on my helmet, and just please, soyez prudent.