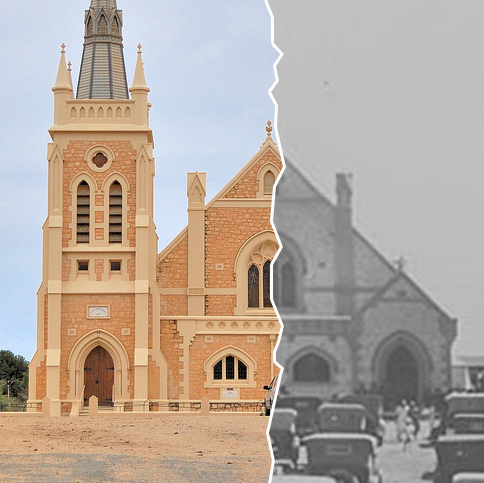 How do you see your own death? Is it a glorious evaporation? Perhaps, like I do, you picture a sudden, adrenal cataclysm of the senses.  Or maybe you are more inclined to die peacefully, in the company of people you love.

Everyone has imagined their own end at one point or another, but I've always found imagining the funeral to be much more powerful. I wonder how many people will come, and what they would say about me. Would they cry? Would I want them to? The thing about death is it's literally impossible to know.

Last weekend, I was at my grandfather's funeral, where 250 people came by the Mennonite church in St. Catharine's, Ontario to see him off.  Some of them I hadn't seen since I was young, and many I had never met in my life. It got me thinking about dying, and funerals, and where I would have my 250 friends gather (if there would be that many).

It is a strange thing to plan for when you're dead and, as far as I know, unable to hear those great stories or relive the iconic moments in life.  But ultimately, funerals are for the living communities that must go on without someone they care about.

My generation has decidedly backed away from churches and other religious organizations. The percentage of irreligious Canadians has quadrupled since 1971, and though we have little else in common, there are now almost five million of us wandering through our respective spiritual vacuums. Speak for yourself, you might say, but I know I am not alone in wondering what the sweeping changes to our collective spirituality will come to mean.

In my daily life, I find atheism to be very convenient. Sunday is free of obligations, and I save money and time by not being involved in the church. But my experience at my grandfather's funeral made me realize some of the impracticalities of not believing.

Almost half of the charitable donations made in Canada go to religious organizations - about $4.6 billion per year. And if all the believers in Canada divide the money donated, the average comes to just $176 each.

Non-believers, on the other hand, have that $176 to spend on Sunday shopping, which doesn't even come to five bucks per week. You'll have to save up two weeks' worth of donations just to get a pint out of the deal.

The irony is that, thrifty as non-believers may be, these savings don't help us plan the important moments in life. Without a default gathering place, it can be easy to feel overwhelmed by the choice. Picking a location for an atheist wedding can be awkward; we try our luck with the weather in parks, or we go to town halls, Caribbean resorts, and sometimes churches simply because the family wouldn't have it any other way. But weddings are easy, and the guests are often there for free booze, not life advice. In the end, we don't have to get married or baptized, but there's no escaping death.

When someone you love dies, you need to go to a funeral.  Even with an organized community of grief, it is easy to feel lost and emotionally incapable. I would have liked to speak about my grandfather at his funeral, but I saw how that effort broke so many people down. The only people able to speak clearly about him were people of the church, people who spend their whole lives thinking about how to deal with these moments, and helping others through it.

Nobody but the pastor stepped forward to talk about the last days of my grandfather's life in brave and coherent detail. I deeply wanted to hear about those last days, as I had felt guilty for not being there with him. It seemed not only appropriate, but also necessary to employ an expert in so much as any living person can be. For funerals to be in any way stoic, there is a necessity for a stoic leader whose duty it is to know everyone, and to care for them.

I am not an advocate for the church, but where are these people in an atheist society? Since the funeral, I haven't even considered going to church, but that makes it even more difficult to understand what I, and other atheists, need to do to create a community of meaningful support.

For me, churches draw a lot of their meaning from being all-purpose. In addition to dying, the church is a place to celebrate your relationship, to introduce your new baby, to have a big meal, or to listen to great music.  A local pub is the closest thing that I know of in my world, but it'd be hard to fit 250 people into Grumpy's with a big casket.

I am also struck by the community ownership of the church space. It felt natural to pay respects to my grandfather in the same place that he, his wife and his best friends had put so much money and time into. All the options I have for a funeral involve giving money to someone I've never met to house my remains and hold a party.

While he was alive, my grandfather worked hard to create a community of people who could support each other when he was gone. I am not sure what my own father and mother are planning, but I suspect it is not much. And I can't say I'm doing any more - instead of joining or starting a church, I'm writing this article on a Sunday night.

I'd like for everyone I care about to put away that $176 a year, and eventually be able to buy something nice together, but I'm not holding my breath. Instead, I only hope that when I pass away, the Internet won't be the only place where people I love can all hang out at the same time.