The gatekeepers of literary culture—at least at magazines—are still primarily male.” If these gatekeepers are showing a gender bias, there’s not much room to make it up later. 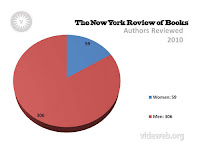 Let's make something very clear: no one wants to have these conversations. Particularly women. Or particularly whoever is outside of these gates. They are a bother. They detract from one's work. One's important work, I might add. They make the person doing the banging on the door seem shrill, annoying, pathetic. They remind the person doing the pointing that they are outside. They affirm to those being barked at that they are inside. They allow the object of the complaint to indulge in that slightly hurt, eye brow raising gesture that is reflected in the eyes of their loyal affirmers. I can see the editors of the LRB and NYRB etc., swiping the nattering voices away with a rolled up copy of their weighty and important rags... Don't bother us with your petulance. We have important reviews of important books to attend to. We are keeping culture alive single-handedly.

And no doubt they do, and in their way, they are. Though arguably, not in a good way.

On several occasions I have taken the time to point out statistics here, and I've tried, in a humorous way, to back away from always being one who points such things out. I would rather not be pointing out the obvious. I would rather not be slotted into the handy compartment of "feminist writer," which basically means that the same publications mentioned in the recent count, and any other editor remotely interested in the "best" books, ever has to deal with me (or anyone who complains) in a serious way because as a feminist, and a woman writer I have identified myself to the Men Concerned Only With Important Thinkers as one to be quickly ferreted out of any given conversation.

I dislike the fact of women always having to hammer these points home. And having their voices in special "women issues" or "women's literary journals" (read, the issues no serious male thinker ever has to read...). I am tired of the divisiveness. I'm tired of what is important being unconsciously "what I'm familiar with." I'm tired of not having women's voices in the mix becuase they don't write sentences in the same (or proper) manner. Or they don't engage in evaluative criticism. Or they don't use military terms. Or they don't want to set up the field and knock each competitor down as they progress through their essay. Or they don't adequately regurgitate enough other criticism or theory or the "Important Ones." I don't want special treatement, I want something that reflects a more accurate slice of contemporary thinking. I don't want a women's review of books, I want a woman assigning reviews at the LRB or NYRB or the NY Times, or here in Canada, because let's face it we are no better. I want a woman directing the traffic flow.

I am extremely indebted to Amy King and Vida (illustration above) for providing us with very compelling, visual, evidence of the situation as it is. I shared these numbers with a fiction writing class last week, and after they picked themselves up off the floor, it started a great discussion...and that is important. Over at the Rumpus Net there's an ongoing conversation. Various magazines have responded. The TLS with shocking ignorance it seems to me. Tin House with a little more class and smart observations. Eileen Myles at the Awl, and more recently, Sugar, who advises women to write like a motherfucker. Good advice.

What is important work? What is a circle jerk? When do these things overlap? Discuss.

Discussion is good. Laughing is excellent. But not only that. I'm sorry, I'm tired of processing. I want results.

So here are a few things to consider. Proactively.

AN ALL WOMEN'S ISSUE IS NOT THE ANSWER

Seriously. If you are a major literary journal purporting to speak to an entire field, don't bother with the special issue. If you're planning this, don't. Also don't bother with the Asian issue, or the Writers of Colour issue, or the new Muslim writers issue either. That's fine for smaller literary journals. And it's essential for introducing us to new work, but it often just gets lopped off. Too easy to not bother with. And as a serious, national or international journal you are right to take the books you discuss seriously. So, if you're serious about looking to review and discuss the best, most important writing, then learn to look for the best, most important writing being published, not just what you know. It's often not right under your nose, and it often does NOT look remarkably similar to your tastes, your life, or the last book you read. It might even, shockingly, make you rethink what you think good or important is.

I've mentioned this elsewhere, and I say it again. We need something of a  Bechdel-like test for literary conversations and criticism. These casual conversations reveal a good deal about an editorial point of view. My guess is that the editors of the LRB, NYRB, etc., can go a long while before mentioning a woman writer. If an editor can go for a stretch of time, or a few thousand words in an editorial, without ever referencing a female writer, or a text by a woman, or a female critic, it probably reflects a/ what he reads and b/ who he will publish/review. If you aren't speaking with women, you aren't thinking of them.  Call him on it. 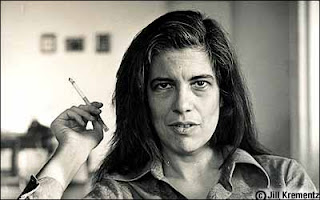 I don't think that any one solution will solve the problem. Not by any means. It's complicated, and reflects deeply entrenched reading habits. I think a multi-pronged approach is in order, and mentoring is one of those prongs. Role-modeling is the most effective mentorshop to my mind. It's cliche perhaps, but being the change you want is a great start. (In other words, don't remain silent, do comment publicly and where it matters, do push discussions in interesting ways, don't get cornered into defensive positions, take risks, think big.)

But more practically, how about creating a forum for women? How about nurturing female public intellectuals. What about something like a Susan Sontag Award for an essay by a woman. This would identify, yearly, women writing and thinking at the top of their game (if you can't already see them....). We have so many great academic writers--but what of the role of the public thinker? I think we need to support women's critical voices in a more public, humanities based context. I think we need to point out the brilliant writers and make the TLS and the LRB and NYRB etc., come knocking on their door.

Laugh baby. In the face of the worst of it, keep your humour. Every time a woman loses sleep over this stuff an angel gets the clap...or something like that. Think Sarah Silverman. Think Tina Fey (Crazy in Hollywood means a woman who keeps talking after you don't want to fuck her...), Rebecca Solnit. Hell, think Stephen Fry, but maybe not Rob Delany (though I don't know, if a woman had a package like that...).

THE ART OF PITCHING ISN'T HARD TO MASTER

There are women's salons in Toronto and Vancouver, that I know of. Likely more elsewhere. What are we discussing there? I hope among other things it's the art of pitching, presenting, being public, not just how to manage the interior life of a writer (not that this isn't also important). As Tin House  pointed out, men pitch. Men bang on the door. For my wee blog I find that men are constantly pitching me, constantly contacting me with ideas and feedback. Women on the other hand, I have to contact, and then contact again and again and again. I have to coerce, I have to affirm, I have to spend a lot of time. I don't mind it in general because it's important to me, but it's exhausting. And why is this?

Aim squarely at the canon ladies. Do not be polite. Reverence will get you nowhere fast. There is a reason the first three Lisa Robertson books took on Virgil. I know, I know, you can't take on this stuff because you don't have classical training, etc. Women and the notion of Mastery is an essay I would like to read from Anne Carson, and another from Lisa Robertson, and another from Vanessa Place, and Rae Armantrout, or Rebecca Solnit, or Lydia Davis (or someone else? please recommend). In short: aim high. Dangle if you will, fail trying, but don't settle.

Update: thanks again Vida. This time for the comprehensive list of responses to the issue:

Articles on The Count
—http://vidaweb.org/category/the-count

3.)   How To Publish Women Writers: A Letter to Publishers about the VIDA Count -- Annie Finch @ Her Circle
—http://www.hercircleezine.com/2011/02/10/how-to-publish-women-writers-a-letter-to-publishers-about-the-vida-count/

6.) Why There's Gender Bias in Media-and What We Can Do About It -- Margot Magowan @ MS. Magazine
—http://msmagazine.com/blog/blog/2011/02/10/why-theres-gender-bias-in-media-and-what-we-can-do-about-it/

13.)  Why It Matters That Fewer Women Are Published in Literary Magazines -- Robin Romm @ Double X
—http://www.doublex.com/blog/xxfactor/why-it-matters-fewer-women-are-published-literary-magazines

15.)  The Numbers Speak For Themselves @ Women and Hollywood
—http://blogs.indiewire.com/womenandhollywood/archives/the_numbers_speak_for_themselves/

—New Numbers Prove Women Are Still Underrepresented in Journalism
—An Open Letter to Leah McLaren Regarding Whether Women Are Funny
—How to Make it as a Writer? Be a Man