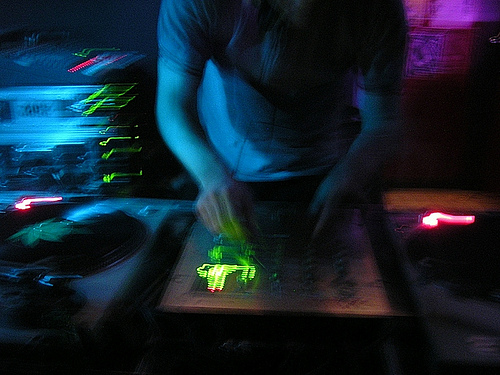 A DJ at the Green Room. Photo by Flickr user Nika.

There used to be a bar on St. Laurent Street in the Mile End district of Montreal called the Green Room. The only green wall in the place was covered with pictures of musicians performing at the Green Room. If you ever found yourself milling around the Green Room in an abstracted torpor, vaguely shirking a nebulous obligation to interact with strangers, you almost certainly learned to avoid standing in front of the green wall. There is just no reasonable excuse for pretending to closely inspect rock photography. The rest of the Green Room was painted red.

I went to the Green Room a few years ago for a celebration of the Green Room. The first thing I encountered upon entering was a tall man on stage eagerly trying to sell a cooler of beer. A shorter man stood beside him and occasionally leaned in to reiterate his quips verbatim into the microphone. An uneasy feeling spread throughout the room as this went on for some minutes. Finally the cooler sold for $37.50. I learned later that the two men were performing improvisational comedy. I’m sure this would have been apparent if I’d arrived on time, but I only caught their last, difficult, time-consuming joke about being auctioneers.

If you were an aspiring writer a few years ago, as I was, and miraculously found yourself On Assignment to cover a silly event at the Green Room, and if this task seemed to you insurmountably odious for no reason that you could readily articulate, you would have wanted to get drunk in a park first with your more socially-confident friend and then choose to walk instead of taking the bus. You would talk about many things, you and your friend, on your long walk to the Green Room. The good news is that when you finally arrived you would have missed most of the improvisational comedy. The bad news is that you would also have missed whatever else constituted your reason for going.

The night held several more surprises that are not worth mentioning in passing let alone writing about, now or then. First, the wine was free. Secondly, there was a man with an open shirt who made some startling quips about his participation in somewhat deviant sexual practices. This man had a son who used to shout something I didn’t understand about group sex every time the man had his friends over. I came to understand that this man was involved in promoting the event, but he had absolutely nothing to say about the wherefores and the whithertos. I denounced him to his face and moved away. Of course that's not true.

The only other thing that happened that evening at the Green Room was that I decided to stop writing and do something else with my life. Perhaps I was being a little dramatic, but at least something happened. Now that I revisit the memory and the few miserable paragraphs I wrote about it, that horrible evening stands out as an adequate symbol of how paltry my dreams had become in the exhaustingly depressive year after graduation. It was the moment when the hopelessness of my disoriented yearning to win the Montreal game became apparent. This is partly what propelled me to exile in a stained glass studio in London, Ontario. That's something I don't regret.