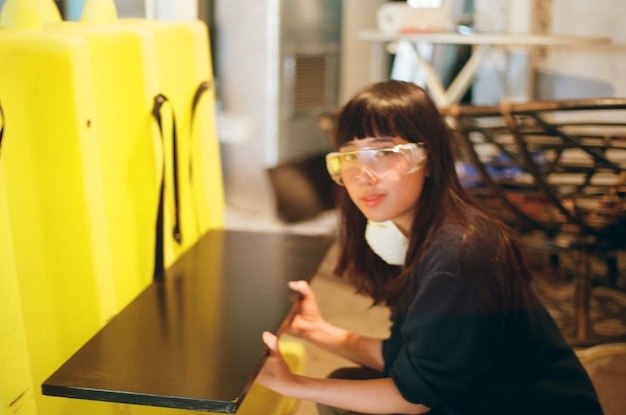 Debbie So putting the finishing touches on a bench destined for McGill campus.

University students are not typically expected to make changes to campus furniture—unless they're, you know, breaking or defacing it. But recent McGill University grads Debbie So and Thomas Rowlinson are about to make a much more constructive mark on their alma mater's Montreal campus: a pair of benches they built with the support of McGill's Sustainability Projects Fund. They'll launch their project, Hitting the Benchmark, tomorrow at the university.

Outdoor benches: so useful, so innocuous. Who wouldn't want more seating? But So and Rowlinson say that, although many McGill employees were ultimately helpful and encouraging, it took them about a year to cut through the bureaucracy and get their project approved.

So says this step is probably the reason more students don't leave lasting impressions on campus planning. "There's such a high turnover of students that people think it would take too much time, and cutting through the red tape of campus and space planning is really a feat," she explains. "This project got delayed twice. When I first went to talk to faculty they just said, 'We don't have space for you to work, we don't have space for you to store stuff.' There were all these things in the way."

This will probably sound familiar to anyone who has ever been involved in university student groups: all too often, university administrations are reluctant to actually help students implement their projects—no matter how enthusiastic they may act about the ideas in theory.

So and Rowlinson were lucky in that they scored work space in a friend's basement. Once the project was finally approved, they were then able to scavenge a lot of materials for their benches from an abandoned building on McGill campus (no, I didn't know there was one either). Rowlinson says it used to be a linguistics building that was condemned because of the mercury in its pipes.

"It's totally abandoned," So adds. "There's this creepy garage door that you fling open and there's piles of junk in there. A cloud of dust wafts out. And it's full of archaic furniture—like those chairs with the table attached, which nobody wants anymore because it isn't big enough for a laptop."

"There are dozens and dozens of hardwood bookshelves. There's a room full of lamps," says Rowlinson.

Ultimately, they chose only materials that could hack outdoors: mostly plastic and thick plywood, all of which has now been coated with outdoor paint and varnish. One of the benches has plant-holders on its back, while another features a chess board. But my interest in the project lies less with the benches themselves—although they are cool—and more with how these kinds of projects help set a precedent for the way students interact with and modify public space, at McGill and elsewhere. So and Rowlinson say they think this is the first time McGill students have used materials found on campus to make something new for the university.

"You don't see a lot of installations and not a lot of reappropriation of campus space except for tabling," says So, who calls the benches a "small-scale urban intervention."

If you're interested in such interventions (or even just sitting down), the benches will be unveiled at Leacock Terrace on McGill University's campus (between Morrice Hall and the Leacock Building, on McTavish St. below Dr. Penfield St.) at 2 p.m. tomorrow, April 8. And yes, if you were wondering, there will be free kombucha and nachos.

Read more about Hitting the Benchmark on Debbie So's blog.