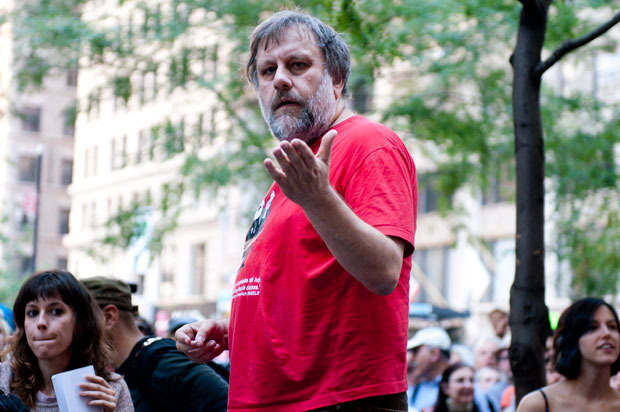 A few days ago, the Slovenian philosopher Slavoj Zizek appeared at Occupy Wall Street. Zizek is often criticized as a merely fashionable thinker, and his writing can be appalling, a disastrous jumble of bad syntax and intellectual sleight-of-hand. But at Occupy Wall Street, he spoke with sudden earnestness. "Don't fall in love with yourselves," he said. "We have a nice time here. But remember, carnivals come cheap. What matters is the day after, when we will have to return to normal lives. Will there be any changes then?"

Because most of my social life is now mediated by the internet, I first came across Zizek's speech via a friend's Facebook post. Then another friend posted it, and another. I'm Facebook friends with a number of activists and organizers, and Occupy Wall Street has occupied my news feed for a while. But the people linking to Zizek's speech weren't activists. They were thoughtful, intelligent friends who found something meaningful in his words, in his appeal not to the aesthetic of opposition but the hard work of social transformation. It was often said, in the aftermath of the 2008 financial crisis, that we were all Keynesians now. What about today? Are we all anti-capitalists, now that we see the heart of America's financial empire blockaded and overrun?

Occupy Wall Street has faced a lot of criticism. Liberal outlets like the New Republic fear it because it negates their reason for being; TNR's beefs with the finance industry spring from the narcissism of minor differences. The bobo dropouts at CrimethInc. also elbowed their way into the discussion. There is a lot at Occupy Wall Street that deserves sharp critique. But, while its lack of coherent demands and open-ended schedule are the usual targets, these are actually the movement's greatest strength. By attacking a symbol, by demanding nothing and everything, Occupy Wall Street refuses to roll off capital's tongue. It will not be Her Majesty's Loyal Opposition or a sprightly internal critic.

I am not opposed to meaningful reform; in the lead-up to the financial crisis, stricter banking regulations and taxes on financial transactions could have meant the difference between home ownership and homelessness for a great many marginalized people. Occupy Wall Street, however, is not the place to call for such policies. It is a site where we can begin to overcome our collective failure of imagination. Many organizers have been working for a long time against the system that Wall Street represents; opposition to inequality is as old as inequality itself. But because it has eschewed the short-lived summit-hopping of the turn-of-the-century counter-globalization movements, and because it has not yet been sidelined by arguments about tactics or protester "violence," Occupy Wall Street has mainstreamed the discussion about economic alternatives. It has captured our attention, and therefore already succeeded.

In the original version of his Occupy Wall Street speech, Zizek said that "we feel free because we lack the very language to articulate our unfreedom"; the statement it could be worse (North Korea! Iran!) wilfully obscures the question could it be better? When winter sets in, when the protesters leave, the most important—and likely sole—victory of Occupy Wall Street will be our early, strangled attempts to speak in this language which currently escapes us.

—The Incredible True Story of Mr. Markarian
—G20 Protests for the Medium-Brave
—Big Brother Likes This