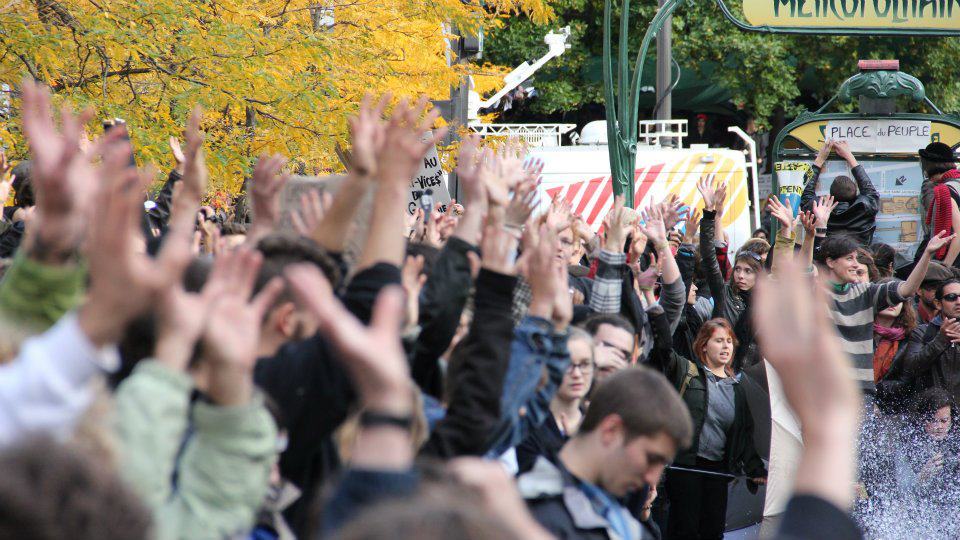 Occupy Montreal has always seemed different from its sister encampments around North America. Even its French name provides a hint. While "Occupy Wall Street" is, in one way, sort of a declarative order—you should occupy Wall Street—it's really more of a proper noun, static and capitalized: the Occupy Wall Street movement. "Occupons Montréal," on the other hand, carries a slightly different meaning: the "ons" turns the word into something more inclusive and active, so the meaning is more like let's occupy Montreal, less a demand and more an invitation.

Yesterday morning, Occupy Montreal was evicted, joining its fellow tent cities across the continent in testing the authorities' patience a hair too far. It wasn't supposed to be this way. Quebec and Montreal are meant to be unique, places of infectious joie de vivre and a laissez-faire attitude. Initially, Montreal mayor Gérald Tremblay made tolerant noises in the direction of Occupy Montreal, declaring that this city is an open, welcoming place—in implicit contrast to hostile New York and Toronto. "Montreal is a different city," he declared on CBC Radio regarding the camp in Square Victoria. "I think Montreal needs to show the world that if we have 120 communities of different origin and we can live in peace, it's because we have two fundamental values. And the first is human dignity and the second is social justice."

Of course, that attitude didn't last long. Now Tremblay is telling the occupiers that they have made themselves heard, that they can leave with their "heads held high." These words are more insulting than they seem. Tremblay is publicly announcing that the worst fears of the Occupy movement have come true: that it can be subsumed into the larger corporate public, that its dissent is an expression of the freedoms afforded to citizens of liberal democracies, rather than a challenge to liberal capitalism itself.

On Thursday, the evening before the eviction, Occupy Montreal was low-key. Square Victoria—La Place des Peuples—was still filled with tents and tarps. An impromptu kitchen offered heaps of lentils, pitas, blood oranges; a library of cardboard boxes held old radical texts and journals. The statue of Queen Victoria was decorated with a V For Vendetta mask and a Zeitgeist: Moving Forward banner. (The presence of conspiracy theorists is arguably the worst of the Occupy movement's many black eyes.) That night's scheduled General Assembly took place in the Square-Victoria metro station, where a few dozen people milled about, awaiting the inevitable. One man announced that their conversations with the mayor's office indicated that there would be no sudden nighttime raid of the kind that evicted Occupy Wall Street, though he didn't seem confident about much beyond that. I tore open an orange. It was rotten on the inside.

Much media attention has been devoted to the supposed lawlessness of the Occupy Montreal camp; it had become a hub for homeless people and drug users because of all the free food and sleeping space. There were obviously people with serious mental-health problems present on the site, though one of the items on Thursday's General-Assembly agenda was how to deal with this issue. Cities hate it when homelessness becomes crowded and obvious. Yet what happens when you clear a slum or a tent city? Do the undesirables simply disappear? Of course not. They are, however, driven into shadows, into more isolated pockets, instead of congregating in a great yawning eyesore in the middle of downtown. Cities evict Occupy encampments and "revitalize" rough neighbourhoods for the same reason: visibility and intrusiveness is a weapon, and when you take that away, the problem moves out of sight and out of the public mind.

That, above all, is why Occupy Montreal was evicted. It exposed the lies Quebecers tell ourselves: the myth of tolerant Quebec, of progressive, social-democratic Quebec. This is the land of the Quiet Revolution and la vague Orange, land of Québec Solidaire and the continent's most militant unions and student movement. But this is also the land of right-wing premier Jean Charest, of the xenophobic reasonable-accommodation debate, of the Parti Québécois' never-ending swing away from its left-wing roots. The lies we tell ourselves remain pervasive even in the face of years of neoliberal reforms and the creeping erosion of Quebec's prized welfare state, changes that have accelerated most of all under Charest. They remain pervasive even in the face of Montreal's brutal, thuggish police force, which has killed young Fredy Villanueva and drawn the condemnation of the United Nations—the same police force that so peacefully evicted Occupy Montreal.

Though it likes to believe otherwise, Quebec is not immune to the forces at work in the world. Here, in the heart of our largest city, were people insisting that things are not quite right in this province-cum-nation. What can we do but kick them out and return to our gentle delusions?