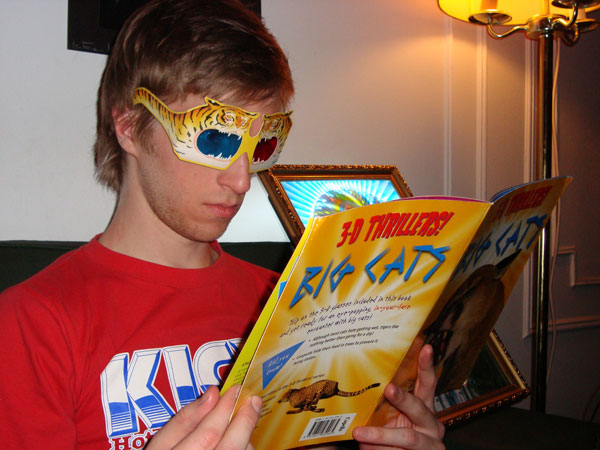 Because long-form journalism seems to be undergoing a renaissance these days (or at least we’re told it is; more accurately, it’s just that there are now a bunch of websites that specifically link to long-form journalism), there are a lot of “Best Longreads of 2011”-type lists going around. I thought I’d get in on the action. These five pieces might not comprise the totality of my favourite reads this year, but for whatever reason, they stuck with me. In no particular order:

1. “The Aquarium” by Aleksandar Hemon, from the New Yorker (subscriber only)

Very few writers are capable of making the reader cry, and nonfiction writers have a more difficult task still, burdened as they are with the pesky task of sticking to the truth. But “The Aquarium” made me weep. It’s the story of the writer losing his nine-month-old daughter to a brain tumour. I don’t need to say much more than that.

2. “The Apostate” by Lawrence Wright, from the New Yorker

A nearly thirty-thousand-word mix of in-depth profile and investigative journalism, “The Apostate” is a slow, smooth takedown of the Scientology-industrial complex. I even printed this one out and annotated it, just to figure out how it ticked: how it struck its careful balance between background and exposé over the course of so very many words.

3. “The Shame of College Sports” by Taylor Branch, from the Atlantic

I haven’t paid much attention to college basketball since I gave up on my short-lived NBA dreams in high school. “The Shame of College Sports” made me wish I had kept up with NCAA. It’s both an epic history of the organization and a scathing critique, with Taylor Branch finally (and controversially) comparing the current system to slavery, and arguing that America’s college athletes should be paid like any other workers.

4. “Led by the child who simply knew” by Bella English, from the Boston Globe

Because it’s from a newspaper rather than a magazine, this feature is less artful than the others, but the heartbreaking beauty of the story speaks for itself. It’s the tale of Nicole Maines, a transgender teenage girl who also happens to have a cisgender twin brother. English ably details the challenges that face parents with trans children, and paints a picture of a preternaturally wise and self-aware young woman.

One of my favourite essays of the year isn’t available online, not even to subscribers. It’s Richard Beck’s lengthy, devastating “review” of the music website Pitchfork, from n+1. I got into a minor Twitter scuffle about this piece with my friend Sean Michaels and the critic Nitush Abebe (who I wish was my friend but, sadly, is not). If I recall correctly, Abebe suggested that the piece was “beautifully made,” but included a lot of “received wisdom and wrongness,” which is a fair critique; everybody bashes Pitchfork, and doing so is not particularly novel, even in this feature-length form. But you don’t have to agree with Beck’s conclusions to concede that this is a forcefully argued, carefully wrought essay. The piece is titled “5.4,” a cheeky reference to Pitchfork’s own numbered grading system—the site has become the most important entity in contemporary music, Beck suggests, but has it left us any richer? (You can read the first few paragraphs here.)

Finally, I’d like to point you to some of the marvellous long-form journalism that Maisonneuve produced in 2011. Essays and reportage of several thousand words apiece are our bread and butter. We work extremely hard at it, and we’ve gotten pretty damn good at it. Maisonneuve doesn’t make everything freely available on the website, but here’s some of the longer stuff we published in the magazine this year that you can access online:

“We Felt No Mercy” by Naheed Mustafa (Issue 39)

A former mujahed recounts the troubled history of Afghanistan, and confesses his own role in some truly brutal crimes.

The writer goes undercover at a so-called “content farm” to learn what happens when algorithms, not editors, decide what gets published.

“What Came Before” by Christine Pountney (Issue 39)

A lively, poignant memoir that defends the worth of nostalgia and regret.

One of Canada’s most vicious contemporary critics asks whether the once-revolutionary poetry of bpNichol has staying power.

A profile of Picnicface, the Halifax sketch group that’s poised to take over Canada—and resuscitate the country’s ailing comedy scene.

A sweeping look at the history of movement and migration in the literary canon, from the Odyssey to Beckett, and a meditation on the meaning of home.

“They Never Told Us These Things” by Julie Salverson (Issue 40)

Part essay, part reportage, part memoir, this piece starts with the little-known role that a northern indigenous community played in building the atomic bomb, then shifts into a moving discussion of the psychology of disaster.

The writer struggles with her relationship with the Muslim headscarf, and ultimately finds some answers in an unlikely novel.

A profile of a man trying to transform his Aboriginal Yukon community, and a look at the promise and challenge of indigenous self-government in Canada.

And don’t forget to pick up our new Winter issue, which features tons of great long-form journalism. There’s the cover story, which is an engrossing exposé on bid-rigging in Montreal snow removal. There’s a 6,300-word feature on the internal war raging at a Christian housing co-operative in Vancouver’s Downtown Eastside. There’s a profile of Canada’s pro-tar-sands ambassador to the US, and a piece about the past and future of the NDP. There’s a memoir about the cursed town of Fernie, British Columbia. If you love beautiful long-form writing, our Winter issue is perfect for you.