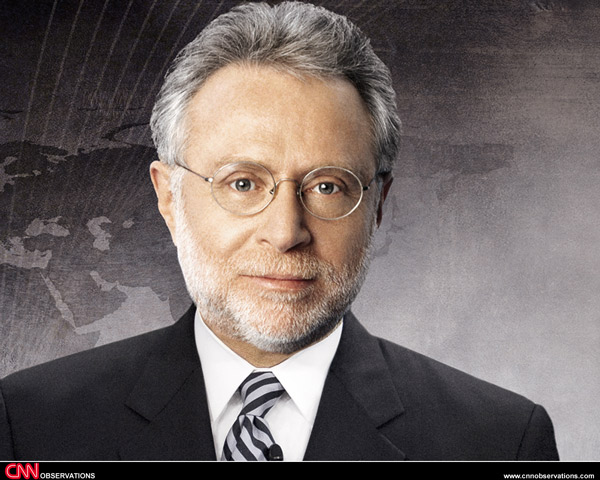 Earlier this week, CNN anchor Wolf Blitzer wrote a brief blog post titled "A salute to politicians," in which he praised "these politicians who put themselves out there before the American public knowing full well that all their warts will be exposed big time." What some readers may not realize is that "A salute to politicians" was only the first in Blitzer's new blog series, tentatively titled, "Wolf Blitzer Salutes a Bunch of Other Things."

A salute to tabloid celebrities

I know it will probably sound weird, but I admire these famous celebrities who put themselves out there before the American public knowing full well that all their warts will be exposed big time.

Most of them already have lots of money and extensive, garish plastic surgery and plum reality-TV deals. They could easily coast at this point in their lives and sit back and relax with their multiple wives and weirdo Scientology friends.

Instead, they are working hard to get on TMZ and out of rehab, publishing ghostwritten novels and squeezing into ill-fitting clothing like sausage bursting out of intestinal casing.

Why do they do it?

The cynics say they have huge egos and serious mental-health problems and should probably seek professional counseling, for the love of God, before they further hurt their loved ones and erode the already alarming state of contemporary culture.

That is certainly true of some celebrities.

But having covered many of them over the years, I can say that some of them are totally hot. Like whatshername—that chick with the sisters. Kardishian? What is she, Lebanese? Anyway, totally boneable. I salute her. Big time.

A salute to "Shit Girls Say"

This might sound a little strange, but I just love these hilarious "Shit Girls Say" videos.

I recently turned on my Computer and Logged On to The Internet, and on my Facebook Page one of my Facebook Friends (Anderson Cooper), had posted this video. And I watched it and I was just like, That is so true!

Girls really do say things like "Twinsies!" and "I have no neck." I've seen them in action. In the process, they are bitterly attacked—often for good reason. Because, who says stuff like "Get these chips away from me"? Girls! That is who!

I salute "Shit Girls Say." It's funny because it's true.

A salute to life

I might be going out on a limb here, but do you ever wake up in the morning, put on a little Black Eyed Peas to get your day started, and think to yourself, Boy! Am I lucky to be alive!

Think about it. Think about everything that had to happen for your mommy to meet your daddy, and then for them to make whoopee, and for you to be born. What are the odds?!?!

Also, think about Science. Did you know that we evolved from monkeys, and that monkeys evolved from little bacteria things? How did that even happen? Nobody knows. It's Science.

But because of Science, you and I are alive today.

Life is nice. We are also lucky to live in the twenty-first century, when there are things like Toshiba laptops, fudgesicles and cures for gross diseases.

It just feels good to be alive, you know? Maybe today is a nice day to go out and treat yourself to a little something, like a new pair of flip-flops, and just feel that nice feeling of the flip-flops flopping on your feet.

A salute to Caramilk

Since the dawn of time, man has wondered: how do they get the caramel in the Caramilk bar?

I don't know. Do you? That's what I thought. I salute Caramilk.

A salute to myself

This one's just obvious. For one, there's my name. Wolf. Fucking. Blitzer. Like a blitz of wolves. If you can find a better name, I will punch myself right in my stern, well-trimmed face.

Also, I'm on TV. Isn't that totally wild? At this point in my life, I could easily sit at home all say, writing blog posts so bizarre and ill-conceived that they would get a j-school student flunked out of undergrad.

Yes, I know CNN is the third-rated twenty-four-hour news network. Shut up. You're in the Situation Room. I own you.

You know the Situation? From that show about those Italian kids?

First of all, I salute him.

Second of all, where do you think he got his name? The Situation Room. There's only one name that can compete with Wolf Fucking Blitzer, and that's the Situation, because it is almost the name of my show.

I can read. That is how I know for sure that the word that is in the Situation's name is also the word in the name of my show, which is called The Situation Room.

I am Wolf Blitzer. And I salute myself. Several times a day.