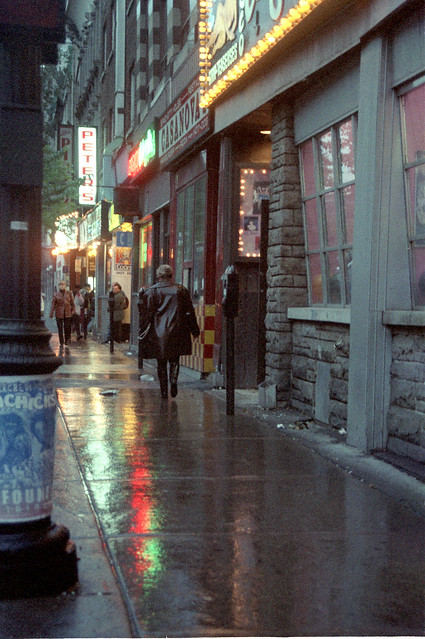 The lower Main in 1997. Photo by Kate McDonnell

One of the defining features of Montreal’s cityscape is the abundance of vacant lots. Weedy, gravelly blocks of land, they can be seen in every neighbourhood, in some areas on every street, delineated by rows of misshapen concrete blocks, like boulders left behind by the retreat of urban development. (The concrete blocks, required by municipal law, serve to prevent illegal dumping.) Ten years ago, as the real estate market boomed, many of the lots were transformed into new apartment buildings and hotels. Streetcorners defined by the absence of buildings were reworked into the urban fabric.

Despite the progress, however, new vacant lots are still being created. Part of the reason is the alarming tendency for Montreal buildings to burn down. But mostly it comes down to a lack of foresight by City Hall and a far too cosy relationship between politicians and developers. It’s never hard to find an example. Here’s a recent one: the block of St-Laurent between Ste-Catherine and René-Lévesque.

For decades, this stretch of the lower Main was seedy but lively, and it embodied the schizoid character of Montreal’s downtown core. Under the elegant gaze of the Monument National marched a procession of strip clubs, peep shows, restaurants and dive bars, including some venerable institutions: Canada’s oldest Middle Eastern grocery store, founded in 1903; the Montreal Pool Room, which had served classic Montreal-style hot dogs since 1912; and Café Cléopâtre, a classic strip club with a flair for the burlesque. It was grimy and past its prime, but it worked in that typically ragtag Montreal way. It was a place where you could get a steamed hot dog, attend Pecha Kucha Night, spend your change on a peep show, buy some smoked paprika and stumble out of a Club Soda concert at midnight — whatever. 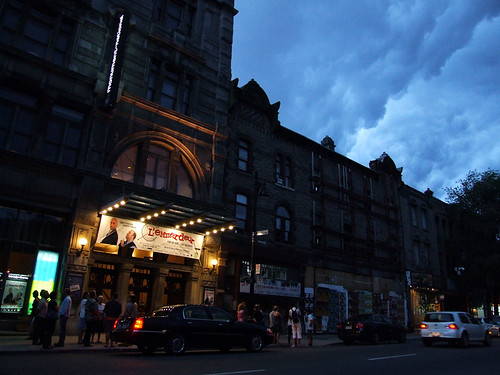 Then came the Quartier des Spectacles. Part urban branding project, part urban renewal, it is an attempt to create a formal home in the urban landscape for the largest of Montreal’s multi-billion dollar summer festivals, notably the Jazz Festival, Just for Laughs and the Francofolies. Parking lots and vacant lots that were used every summer for concerts and other performances have now been converted into permanent plazas and squares. Other initiatives aimed to unify a district containing many of Montreal’s theatres, nightclubs and concert venues through new street furniture, lighting schemes and traffic calming. The 1960s-era Place des Arts cultural complex was revamped, a new symphony hall built, an abandoned building converted into a jazz centre and a new contemporary art complex built on the site of a once-derelict building.

Private investment was meant to round out the neighbourhood. But that’s where the Quartier des Spectacles has failed most spectacularly: it has created almost as many holes as it has filled in. First was the site of the Spectrum, a beloved concert hall, which was torn down in 2008 for a big-box retail complex that still hasn’t materialised. Now the lower Main is going through the same sad process. With the blessing of City Hall, a developer bought out most of the block, evicting the Montreal Pool Room and others, with the intention of building a large office block decorated with the façades of historic buildings. When the owner of Café Cléopâtre refused to sell his property, the project was stalled, and it eventually collapsed along with the economy. Now the block is condemned as structurally unsound; it will be demolished.

Heritage advocate Phyllis Lambert writes angrily against the demolition in Le Devoir, calling this kind of wholesale destruction of a city block a throwback to the days of massive urban renewal in the 1960s. She also strikes at the heart of the matter, which was the reason for the block’s decline: not economic misfortune, but bureaucratic incompetence. “The fact that this demolition was entirely orchestrated by politicians, bureaucrats and the developer by creating a sense of urgency and invoking public safety, and without any public consultation, is a worrisome step back for democracy,” she writes.

There is an alarming historic precedent for the case of the lower Main. In the mid-1980s, two developers purchased a block of Victorian apartment buildings on Overdale Avenue, in the west end of downtown Montreal, with the intent of redeveloping it into a $100 million luxury condominium project. Despite ferocious opposition from the community, the city’s administration gave the project the go-ahead, justifying the loss of historic buildings and the eviction of nearly 100 people with the development’s potential tax revenue. The block was razed in in 1989. The condominiums were never built and Overdale remains barren today. Its one surviving structure — the Louis-Hippolyte Lafontaine mansion, built in the 1830s — sitsabandoned and decaying.

You don’t have to be a cynic to think that this is what lies in store for the lower Main. The buildings will come down, the concrete boulders will come up and another vacant lot will make its appearance in a city that is no stranger to them. 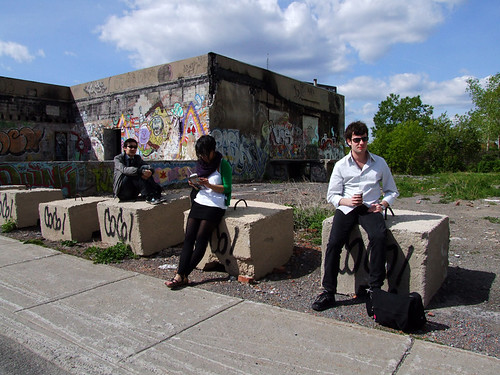