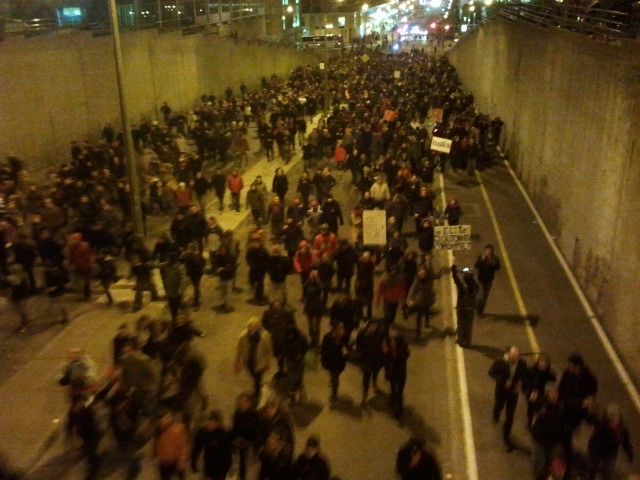 Last night, I met my friend Jesse and we walked to downtown Montreal, to attend a demonstration against higher tuition fees. Hundreds of thousands of Quebec students have been on strike for the last two months, and Jesse, a journalist, was in town from Toronto to cover the movement. I had first met him seven years ago, during the last student strike, when I was an impressionable first-year at McGill and he was a loudmouth activist. That was a formative time for me: attending massive protests, voting in general assemblies and walking the picket lines all provided a glimpse at a different way of doing things, a way to fight back and win. My earliest memories of Jesse involve him screaming unintelligible things into a megaphone.

We were a bit late to the demo, and, as often occurs with gatherings of this size, we heard it before we saw it. As we approached Sherbrooke and Berri, we were greeted by the sight of thousands and thousands of people streaming up through the underpass, as if emerging from beneath the earth. Some people have estimated the size of last night's crowd at anywhere from five thousand to twenty thousand; one can never tell at these things. Needless to say, it was a shitload of people.

I'm no longer a student, but as we marched, I could still remember many of the chants we used back in 2005: "On veut étudier, on veut pas s'endetter" and the like. Municipal and provincial riot cops menaced the crowd from all sides. Many protesters raised their hands in peace symbols. One guy mockingly dangled a donut on a string. We walked for hours: along Sherbrooke, down St. Laurent (the site of a brief tangle with police), west on Ontario, on and on. Some people leaned out from their apartment windows and waved red items—shirts, blankets—to evoke the movement's ubiquitous crimson square.

Rex Murphy has a column in today's Post, deriding the protests, in his typical overwritten bloviation, as "the future elite of Quebec having a self-indulgent fit." "Serious protests, involving grave issues, with real risks and real moral purpose, are going on all over the world," he says. "They match life-and-death risk with the value of what is at stake: the human rights of citizens suffering under dictatorial governments." This has been a common refrain of opponents of the strike: you have nothing to complain about, so shut up and get back to class. It's always worse somewhere else. People like Murphy think that protest is fine, as long as it doesn't happen anywhere nearby; they think that "politics" is something that only happens during elections and in newspapers.

Comparisons to the Arab Spring and Occupy were inevitable, and occasionally invited: some Quebecers call the current movement "le Printemps d'erable," or Maple Spring, which sounds like "le Printemps arabe." These comparisons are a bit misleading, though not for the reasons that Rex Murphy thinks. The Quebec student movement is like Occupy only if you imagine an Occupy that rears its head every seven years or so and wins almost all the time. Of course Quebec is not Syria. Nobody is saying it is. But we're allowed to draw inspiration wherever we please.

Like the other anti-austerity and pro-democracy movements currently shaking the globe, the Quebec student strike is less a political prescription and more a place to start a different kind of dialogue. The Charest government's cynical refusal to negotiate with CLASSE, the student group largely responsible for the strike, is emblematic of the fact that there's not much of a conversation to be had. The supporters and opponents of the strike have fundamentally different ideas about what our social world should look like. Perhaps it's time to embrace the fact that we're simply talking past each other.

The demonstration wound down, and Jesse and I grew tired. We retreated to a bar at Rachel and St. Hubert, known as Verres Stérilisés, which had been my favourite dive as a student. The dirt-cheap pitchers had increased in price from $6 to $7.50. Jesse and I talked about how our politics had changed, or hadn't, since we were at university. We thought that we knew more now, but we were no less sure in our convictions. We still belonged out there.