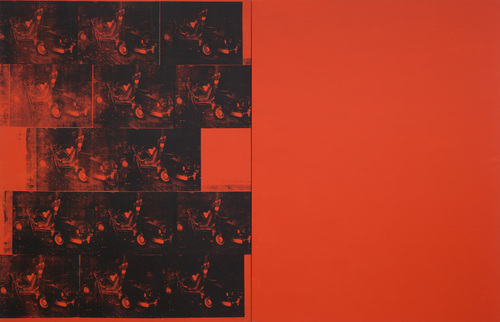 Last night I witnessed a fatal car crash, which is not something I've ever seen before. A few of us were walking on Van Horne, on our way to a party, when, a block ahead of us, a car that was moving far too quickly spun out of control and slammed into a building. "Holy fuck," I said, and then I said it again as I sprinted toward the crash, reaching for my cellphone. Smoke billowed and the air smelled acrid. I called 911 and begged for an ambulance, and when the woman asked me questions about the extent of the injuries and the presence of fire I said that I didn't know and just asked her again to send an ambulance, please just send an ambulance. (She got pretty cross with me at this point; I still haven't decided whether this was fair of her or not.) A crowd gathered and one of the passengers got out, hysterical but unscathed, although the driver and the backseat passenger remained in the car, not moving, with blood on their bodies.

The police arrived and told us to move back, and then to move back some more, as they stretched yellow caution tape across the street. They did not ask us what we saw. Three of us stood there, feeling aimless. What do we do now? Do we go to the party? Would that be wrong, somehow? It was freezing outside, and we convinced ourselves that, yes, the best thing would be to get inside, to be warm, to see friends, so we went inside to be warm and see our friends.

At the party, a very good band was playing but I did not know how to listen to the music or describe to my friends what I had just seen. Someone held me in a generous hug for a very long time, and then we started talking about the accident, which somehow became a conversation about my recent breakup, I guess because witnessing the accident made me think about my own life and the people I care about. There was a mattress up against the front window of the apartment, presumably for soundproofing, so you could not see the police lights that were flashing just outside. It was strange to realize that everyone at the party had had too much drink and was generally acting irresponsibly but remained safe and whole, while the people in the car were not. I behaved strangely for the next little while, alternately staring blankly at the band and attempting to dance and having surreal conversations. I gave my phone number to a person I barely know and then I left the party.

When I woke up the next morning, a friend who had witnessed the accident with me called and said that she had read a news article about it. The driver had died. The other passenger was in critical condition. Alcohol probably played a role. We said that we loved each other and hung up and I lay in bed and said "fuck" a few more times.