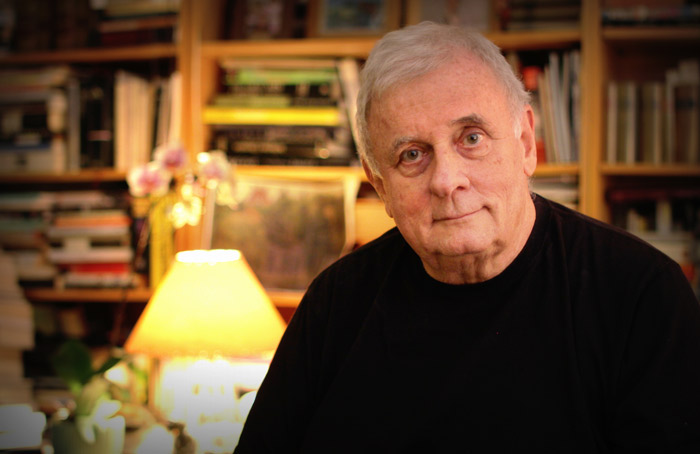 There are not many writers who earned their way into the Academy of American Arts and Letters on the strength of salty volumes like The Joy of Gay Sex. But Edmund White has made a multi-decade career out of being one of the world’s most beloved standard-bearers for homosexual high culture, and his presence will be a major part of the Blue Metropolis Festival’s banner year for queer lit.

Thirty years ago, White became an undeniable literary force with his breakout novel A Boy’s Own Story, which was praised for its unflinching descriptions of teen sex, hustlers and Freudian mother problems. Its story arc is built on the perennial gay leitmotif of moving to the big city—in White’s case, to New York from his native Michigan. For decades, White has oscillated between writing transfixing memoirs and meticulous biographies of great French homo-intellectuals like Jean Genet, Marcel Proust and Arthur Rimbaud; he also pauses every few years to produce a historical novel like the critically acclaimed Hotel de Dream, his response to Thomas Mann’s Death in Venice, or Fanny, about the nineteenth-century American feminist Fanny Wright.

At seventy-three, White still yearns to write a “real novel” like his friends Andrew Holleran and John Irving, but, as we await that project’s completion, his fans will soon have the consolation of yet another memoir—this time, about his years spent in Paris during the AIDS crisis, of which he gave a fictionalized account in his 1997 novel Farewell Symphony. White’s ability to slide between biography, memoir and novel has given him an almost godlike stature in the realm of gay literature. (Apparently, many heterosexual people read his work as well.)

“We’re like black people who spend all their time studying white people, but white people don’t spend any time studying black people,” White says of gay writers’ peculiar knack for human observation, a talent he admires in men like Tennessee Williams. “He wrote wonderful characters like Stanley Kowalski, in A Streetcar Named Desire, but he didn’t really hang out with people like that.” Once, while sharing a drink with the great Southern playwright in the seventies, White insinuated that his writer hero “must have lots of luck with these boys.” According to White, Williams replied, in his signature drawl, “My type has never heard of me.” Williams is one of countless famous gay figures with whom White has crossed paths, from philosopher Michel Foucault to poet James Merrill to Gore Vidal, the oblique subject of White’s 2006 play Terre Haute.

Like Vidal, White is often out of step with the cultural zeitgeist. Rather than set his most recent novel, 2012’s Jack Holmes and His Friend, in the trendy 1980s and 1990s (which are as popular in gay lit as they are in fashion), White rooted Jack Holmes and His Friend in the New York City of the sixties and seventies—simply because, he says, it was the period with which he’s most familiar. Jack Holmes could be seen as a melancholy companion piece to Dancer from the Dance—Andrew Holleran’s seminal tale of 1970s decadence and one of White’s acknowledged influences—but written thirty years later. Except for the coda, the dual-perspective novel about a gay man’s love for his straight best friend is set entirely before the devastating crux of modern gay culture and politics: the AIDS crisis.

White himself was overseas during much of the early American AIDS crisis. “It’s true that I left [New York] in 1983, and missed out on ACT-UP, and I think until now it’s been a very neglected period,” he says, although he was one of the founders of the Gay Men’s Health Crisis, an AIDS service organization still in operation today. White confides that he “wept buckets” while recently watching the acclaimed ACT-UP documentary How to Survive a Plague. "That was a world I didn’t know,” he says. “I feel like I missed out.” However, he was an active member of French activist group AIDES during his Paris years, and he watched his partner Hubert Sorin die of the disease. White contends that the AIDS crisis years—roughly 1985 to 1996—were relatively absent from cinema and mainstream literature in the last two decades due to what many cultural commentators have called “AIDS fatigue.”

“The people with AIDS didn’t want to read about it and the people withoutAIDS didn’t want to read about it,” he says. “I think it’s only now, as far as AIDS goes, that we can begin to focus on that period … It was a great cultural moment too: a lot of important writing and dancing came out of that.” White’s anti-tragic view of the period suggests that his upcoming memoir may trade more in resilience, humour and beauty than in hopelessness or anger.

It’s this sense of empathy that helps White’s work escape being pigeonholed as “gay literature,” even if he undeniably speaks from a gay man’s perspective. While he and his partner Michael Carroll have been together (and happily unmarried) for more than a decade, White’s stories are much more a testament to friendship than to romantic love or sex—although there is always a lot of sex, and sometimes not a lot of joy.

Edmund White will speak at two events (in French) at the Blue Metropolis Festival, and will join Montreal author Peter Dubé on Saturday, April 27 for a brunch chat at the Opus Hotel’s Brooke restaurant.

With assistance and additional research by Ian Bradley-Perrin.