Even when Montreal’s Gay Pride week, Divers/Cité, is in full swing, you barely notice them: a gay granddad makes less noise than a harried cross-dresser running late for some party. They prefer the shadows to the bright lights—old habits die hard. But they’re out there. I found a nice bunch.

They are a gang of forty—give or take a white head, a salt-and-pepper crew cut, a Just-For-Men mane. Like every Sunday, they’ve reserved several tables at the back of Food Resto Lounge, a hip spot in the heart of the Village: “Fantastic!” according to one foodie at RestoMontreal.ca; “horrible, horrible, horrible,” according to another.
Surprise: one of the group looks like he’s clocked even fewer miles on the meter than me. I decide he’s a son or a grandson out for brunch with Dad or Granddad and his cronies. Not so. This whippersnapper turns out to be one half of a spring-winter couple, formed last summer. He’s a real sweetheart, and proof that it’s not all over by autumn. 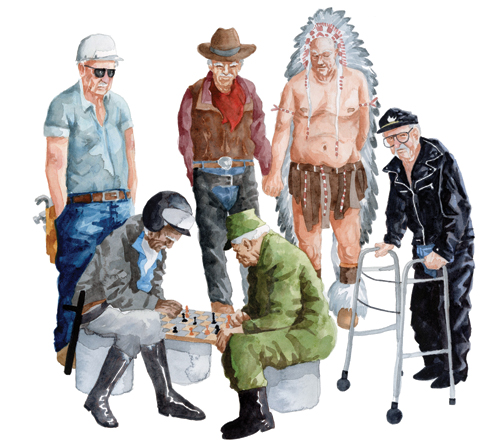 Aside the spring chicken, all the gentlemen here are members of the ARC (les Aînés et retraités de la communauté—the seniors and retirees of the community). Which community? The community. Period. “When we were deciding on a name for the association, I suggested including the term ‘gay,’” explains Jean B. “That idea was shot down, but it’s easy to figure out why—many of our members feel they can’t be that open about their orientation.”

Secretary of the ARC and retired teacher Jean B has reserved me a place beside him, with a card saying “journalist” and a coffee (still hot). The coffee tastes of cardboard, but I savour the thoughtfulness. I picked out Jean B easily among this crowd. His mug features prominently on the homepage of the association’s website, as do those of other members of the executive: Raymond B., Gilbert O., Lionel L.. Why the anonymity, Mr. B? We’re in Quebec, not Iran, where homos are hung in public—ironically, since the “phenomenon” doesn’t even exist there, according to President Mahmoud Ahmadinejad.

“That’s just how it is with the association. I’m OK with sharing my identity; my name is Jean Boisvert. But since nobody writes his family name… And it’s always difficult to get people out for the infamous Gay Pride march.” Last year just twenty-three ARC members (out of 120) answered the call. “When we passed the commentator, she yelled: ‘They let them out for the day; it’s going to be wild at the hospice tonight!’ I laughed, but a few of our members didn’t find that so funny.”

I look at these men chatting and finishing up their meals, happily gay together, forgetting for a few hours their solitude and the fact that they’re sidelined by their own youth-obsessed community. At one time they were branded dangerous outlaw perverts, immoral and abnormal; today they’re free to ogle the curve of tight buns heading for the W.C.—the water closet. Nice coincidence. The washroom was always (and still is) the spot of choice for clandestine encounters. And as for the “closet,” they know it well. Some still reside there part-time, others have moved out, but remember the suffocating odour and the tangle of lies they left behind.

“IT WAS JANETTE BERTRAND who gave birth to me.”

Pierre-Paul, a man in his seventies sitting next to Jean, had been staring at me for some time. He wasn’t trying to pick me up though. Pierre-Paul grew up in a religious family; it’s Sunday, and he feels like confessing. I’m here to listen.

In 1987, Bertrand invited gay fathers to speak on her groundbreaking talk show, Parler pour parler. Pierre-Paul, married for over a quarter of a century and father of a grown boy, could not believe it: so he was not the only one living a nightmare?

“At night, in my dreams, I was sleeping with men; in the morning, I would cry. I couldn’t accept it; I couldn’t understand why I was like that. I didn’t allow myself to look at men; I badmouthed gays.”

For ten more years, he kept up the charade, “for fear of rejection.” When his sister twigged, that’s exactly what happened. “I understood her reaction. Perhaps one day she’ll accept it. It took me thirty-five years.”

Since then, his ex-wife has met another man. And Pierre-Paul? He hasn’t been so lucky. I dare not ask if he has at least experienced the type of love that haunted his nights. I think I know the answer. “I don’t regret my life,” he says, perhaps to reassure me. “I’m a great-grandfather, and I get a lot out of that. My son and I phone each other every week. I tell him, ‘You know, it’s not easy for your old man to live in the minority. I often go back into the closet.’”

In the apartment block where he lives, he’s scared people might find out. And he worries about moving into a “normal” retirement home one day.

“I understand why a hetero who’s been with his wife for sixty years might not be able to wrap his head around love between two men. It’ll be difficult; I’ll need to censor myself. At home, I have artistic photos that define my orientation.” I look at him suspiciously.

He laughs. “Yes, artistic. And when people come to the house…”

“You flip them, and on the back there’s the Virgin Mary?

“No. I’m comfortable with them as they are."