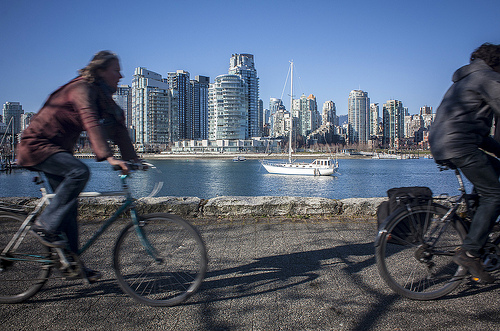 Walking the length of Vancouver’s Seawall is a lesson in design fads and fashions. The Stanley Park stretch dates back to 1914 and is elegant in its simplicity; a rough-hewn stone wall threads its way around the park’s craggy shoreline, rainforest on one side and cool Pacific waters on the other. Near Granville Island, the path takes on a late-70s look with brick paving, timber planters and suburban landscaping, a trend that continued into the 1990s, with some variations — square-cut timber gave way to painted steel tubes as the material of choice for benches and railings, and the pine trees of the 70s were usurped by a 90s love of palms, which matched the SoCal architecture that was fashionable at the time.

By the time the late 2000s rolled around, fashions had changed yet again, and this is reflected in the newest stretch of the Seawall, which runs along the southeast side of False Creek next to the Olympic Village. The materials used are at once rustic yet contemporary: cool materials like concrete, granite and steel juxtaposed with warm timber. Natural shorelines were preserved rather than obliterated, wild grasses are abundant and there is generally a more diverse array of spatial experiences than on the more rigid parts of the Seawall: paved plazas, boardwalks, pebble beaches, piers jutting into the water. (The entire Seawall is documented on Google Street View, so feel free to take a virtual bike ride to see if you agree with my impressions.)

It’s that depth of experience that sets the newest part of the Seawall apart from its predecessors. It is not simply a space meant for enjoying the view; it’s a space that encourages active participation. There are lounge chairs, a seemingly unregulated community garden and — most interesting of all — there’s Habitat Island. This spit of scrubby offshore land is accessible only at low tide via a pebble beach. The last time I visited, on a sunny spring day, the island was filled with people: teenagers rummaging through the bush, some people smoking pot, others drinking beer, families examining the aquatic life of tidal pools. It’s a lovely, unmanicured island, its wildness made all the more striking by the wall of glassy condominium towers across the water. 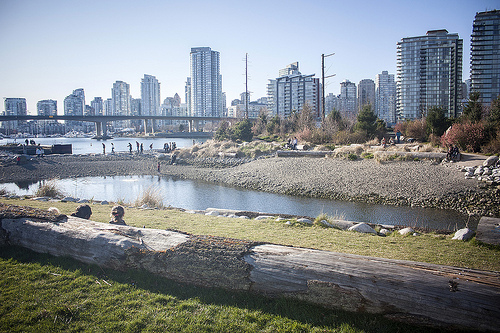 Yet Habitat Island is an entirely man-made space, created by dumping 60,000 cubic metres of rock, gravel and sand into False Creek. A deep layer of soil was spread over the site and 200 local varieties of trees, flowers, shrubs and grasses were planted. It has since become a refuge for birds, crabs and fish. “When visiting the island, remember that is an urban oasis that we would like to keep in its natural state,” the Vancouver Board of Parks advises on its website.

It makes me think of my conversation with architect Joel Sanders, who described the naturalism of Frederick Law Olmstead and his contemporaries as being driven by a “guilty conscience” over the impact of humans on the environment. Anyone with a healthy sense of irony will note that, with Habitat Island, things have come full circle: “Please don’t disturb the nature of this artificially-created environment.” At the same time, there’s a fluidity in the relationship between the built and natural you don’t see around Beach Avenue, for instance. The Seawall is pretty much complete, but if there was room to expand, I wonder what the trend would be in 20 years. 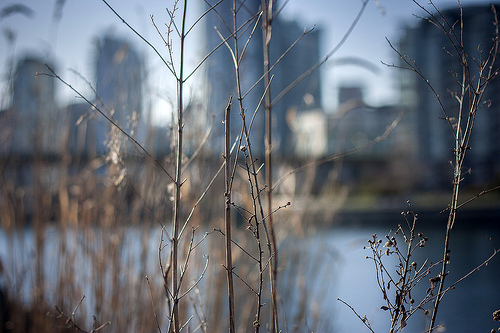