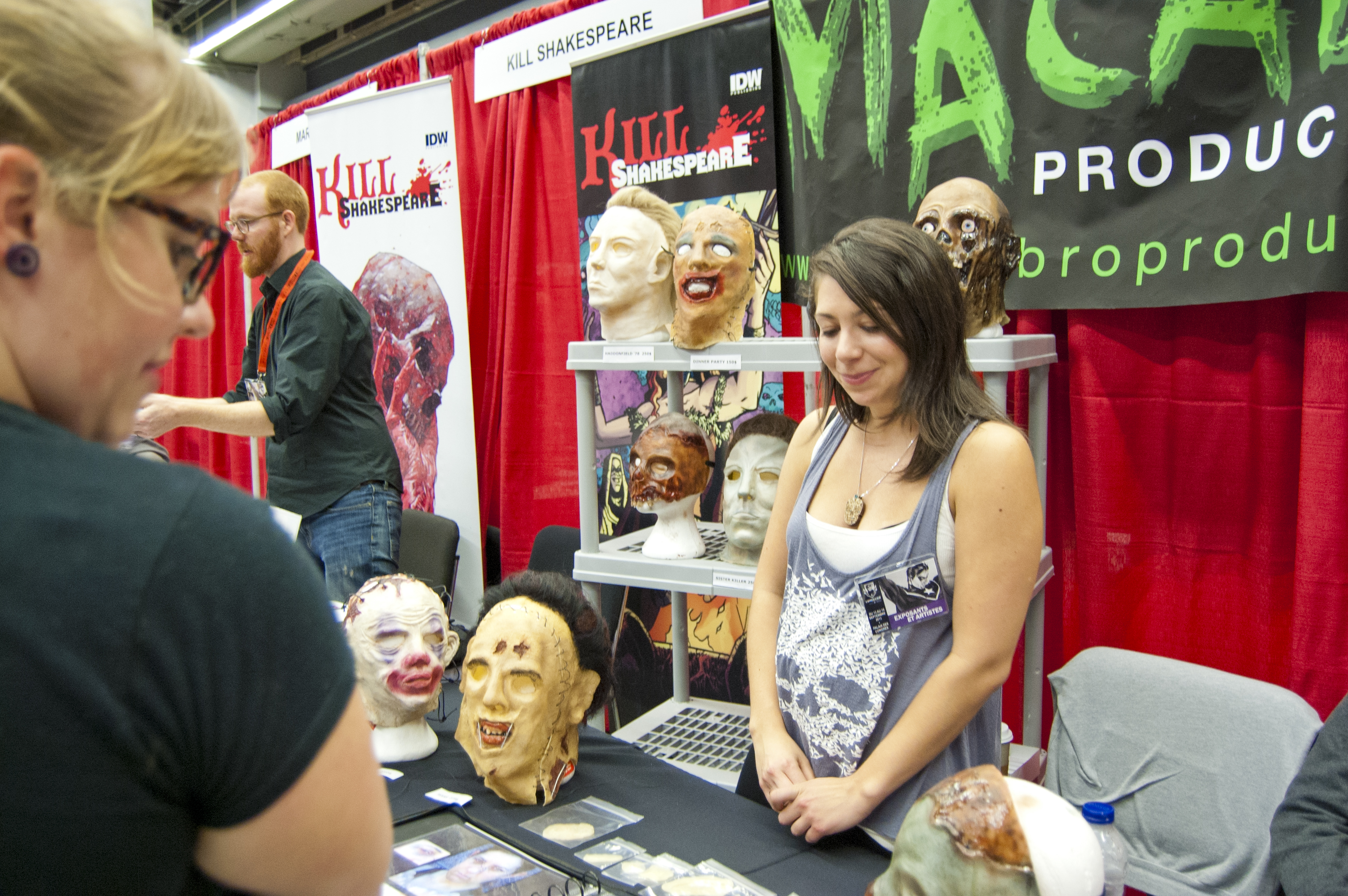 Vicky Clerici, the owner of special effects makeup and props company Macabro Productions, is cleaning her brushes and putting away her fake blood. She’s just finished giving a satisfied customer a gruesome head injury in front of her booth in the Artist's Alley at Montreal’s Comic Con. For Clerici, every oozing gash is a marketing tool. “Comic Con is more like advertising,” she says. “You meet a lot of locals.”

Vendors are there to capitalize on the crowds who come out to meet X-Files actress Gillian Anderson, chat with X-men comic book artist Chris Claremont, or pick up some Star Trek Christmas ornaments. The annual event, which this year attracted more than 42,000 visitors, sees all aspects of nerd culture well represented. But Comic Con isn’t just a glorious gathering of geeks. Many local Montreal artisans count on this as their biggest opportunity of the year, and not all of them are as enthusiastic about the experience as Clerici. Many artists are discovering that the large-scale event doesn’t suit their small businesses.

Rupert Bottenberg, the co-creator of Lost Myths, an art project that seeks to uncover lost or forgotten legends, comes for the exposure. “Starting to build these long-term relationships [is] the backbone of any artist’s career,” he says. But long-term relationships don’t necessarily translate into financial profitability, and Bottenberg feels like Comic Con might be the wrong venue for local, original art, since most of the crowd’s focus is centered on basic fandom. “They’re here to buy things related to commercial properties they’ve been familiar with for the last thirty years.” Though he’s managed to break even, he says most of the event doesn’t stray much from the mainstream. Small, independent artists are "just kind of along for the ride.”

Here, the small producers are always at the mercy of the larger fan machine. Melanie Audet, who stands behind a wall of handmade stuffed monsters (creations from her company Curious Little Bird) thinks that this year's event layout has hurt her sales. Attendees have to pass by the cheaper, mass-produced merchandise before heading over to the Artist’s Alley, where smaller creators are set up. “The toys made in China, that shouldn’t be the first thing people see," says Audet. When fans make their way to the Artist's Alley, they're thrown off by the price.

Adria Lynn Filion of Wasteland Artisan—whose primary wares are handmade leather masks, sometimes featuring long, Venetian-style noses or Cthulu chin tentacles—was happy to be placed in the vendor’s section instead of the Artist’s Alley. “Nobody sees you back there,”she says. But even still, she wishes there was a separation between vendors who resell purchased merchandise and those who, like Filion, make their products by hand. Customers come to her booth and ask her why her wares cost so much. The answer? “Well, because I pay myself almost minimum wage.”

Tailoring your offerings to Comic Con seems to be the key. Gabe BoOh, who makes handmade baby accessories, brought almost forty superhero bibs to the event, and sold out by Saturday morning. “Comics are what sell,” she says in French. Christopher Olson, creator of Tremendous Tales, a series of illustrated short stories, agrees. “One of the pieces of advice I’m getting from other artists is to sell work that’s based on popular characters.” The number of exhibitors offering portraits of Boba Fett and Superman hasn’t escaped his notice.

After many years of attending the con as an exhibitor, illustrator Sanya Anwar carries herself like a veteran. “Every city has its mood and its style,” she says. The author of 1001, an action adventure based loosely on the Arabian Nights, she believes that with time, the focus of the convention will change. “Because Montreal Comic Con is still relatively new on the comic scene, I think fans are just starting to get an understanding of what’s available. Five, ten years down the road, we’ll see a lot of people buying original work here, too.”

While the event matures, the artists will have to stick it out, trying to reach their intended audience and avoid being lost in a sea of Jedi and Transformers. And for some, the feedback from fans is worth it. Olson gets paid “probably more in compliments than in actual money,” but continues to come back to validate his work, enjoying meeting fans he rarely has a chance to interact with.

For Clerici, the post-con buzz lasts about a month, and then it’s time to keep promoting her business. With a bit of creativity, it is possible to make an event primarily concerned with Cylons, Daleks, and droids work for the more human element of the convention.