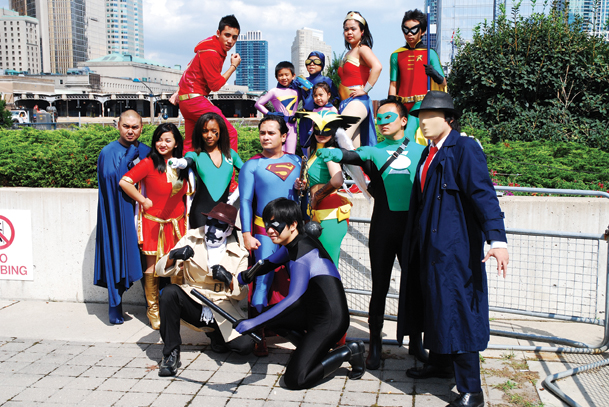 THE NERD'S LAMENT: I attended Fan Expo 2009 alone. Held in Toronto, Fan Expo Canada is one of North America’s premier conventions of comic books, science fiction, anime, horror and gaming. Given the sense-data assault of an event like this—a good portion of the attendees show up in costume—it’s nice to have a friend with whom to crack wise. Not a co-heckler, necessarily. Just someone to note the toddler stuffed into a thickly padded Thor getup, or the teenage girl dressed in a Bowser outfit so slapdash she resembles some sloppy avant-pop nightmare.

But the Expo’s sprawling centrepiece is found in the exhibition area. Occupying most of the Metro Toronto Convention Centre’s 800 level is a marketplace where vendors cater to legions of fans desperate to procure ­Teen Titans back issues, old copies of TV Guide with Gillian Anderson on the cover and hockey jerseys emblazoned with the Decepticon logo from Transformers.

This makes Fan Expo a great place to blow your money. Just getting into the main exhibition floor means forking out between $25 and $49, and you should budget at least triple that if you plan on getting any of the highly coveted autographs from Leonard Nimoy, Linda Hamilton or Udo Kier. A “professionally done” photo with Guest of Honour Bruce Campbell (best known as the wiseass anti-hero of Sam Raimi’s Evil Dead films, or “the biggest celebrity you’ve never heard of,” according to event coordinator James Armstrong) will run you $45. Against the far wall that hosts Artist Alley, a pencil-and-ink sketch by German illustrator Marko Djurdjević costs $500. A few booths down, Toronto-based cartoonist Michael Cho’s prices are more reasonable: $40 will get you a fantastic original piece of his Roy-Lichtenstein-meets-Jack-Kirby superhero art.

One thing is obvious: Fan Expo is booming. This is what Wall Street would look like if the world’s financial nexus were run by chubby men in Iron Maiden tees. And like Wall Street, Fan Expo is notorious for its cutthroat ways. Christopher Bird of Torontoist blasted Expo parent company Hobbystar’s habit of scheduling “parasitic” Fan Appreciation Days right before Toronto’s other major conventions in order “to hurt their competitor’s attendance and thus profit margin.”

Roaming the Expo, I begin narrating the whole thing in my head like the voice-over in a Werner Herzog documentary about obsessive, half-mad visionaries: Zese strangers have ambled here dressed up as ze costumed scions of a disposable culture. Yet beyond ze fanaticism, zere is a secret beauty. A delicate madness which zese foolish dreamers dare give full expression to…and so on.

But that kind of condescending bombast is unfair. There’s nothing disposable about this culture—Superman and Captain America will endure long after Werner Herzog is just another name on some “Intro to Film Studies” syllabus. There is no delicate madness and no secret beauty either. There are just snaking lines of people (mostly under thirty, mostly men) in the plaid-shirt-and-faded-jean uniform of the contemporary twentysomething everyman. It’s this attendee I’m most interested in: the schlub unconcerned with costumes, but deadly serious about comics.

IT'S HARD TO PINPOINT the precise moment of geekery’s mainstream emergence, but I’d suggest it was 1984, when the stars of the comedy Revenge of the Nerds stole the frat boys’ girlfriends and became campus kings. Then came geek chic: the glasses, the sweaters, the graphic-novel-as-accessory. Take, for example, Adam Brody’s Seth Cohen character on Fox television series The O.C. Namedropping The Goonies and otherwise-obscure comics scribes like Brian Michael Bendis, Seth Cohen was one of geek chic’s most formidable embodiments.

Ditto the quarter-life slackers of Edgar Wright’s Britcom Spaced, who tossed out Predator and Resident Evil references at Flash-like speeds. A far cry from more established exemplars—say, The Simpsons’ corpulent, unpleasant Comic Book Guy—these were fictional dweebs comfortable in their pimpled skin. The geeks had come out of the closet.

“We’ve been aware of a diversification in the market,” says Armstrong. In part, he thanks the multi-billion dollar franchises that have grown out of George Lucas’ Star Wars prequels and Columbia Pictures’ Spider-Man trilogy for Fan Expo’s surging popularity. “These are not just small properties that a certain following is going to go and pay money for. This is mainstream. My dad saw that movie. All my uncles and aunts. Everybody’s in on this.”

Comic book fare has swept the box office before, though not on the scale we see today; the old Batman movies never received the critical acclaim heaped on The Dark Night. So is a subculture still “sub” when you can buy a $30 pre-faded Thundercats T-shirt at Urban Outfitters? Unlike other co-opted signifiers of cultural identity, from Doc Martens to the keffiyeh, geek chic has no origin in class struggle or ethnic identity. It appropriates the aesthetics of a perpetual underdog who lacks political grievances; this, it seems, is the face of that endemic Gen Y ennui we keep hearing about. Geek chic sees jocks drape themselves in the dweeby symbols of suburban alienation. It’s something like Susan Sontag’s camp, except everybody’s forgetting to wink.

This is a matter of proximity, really. The nerd who watched Star Trek: The Next Generation possesses a nearness to the source material trumping that of anyone who hopped onboard with J.J. Abrams’ big-budget reboot. This hardened Trekkie enjoys a position of privilege at an event like Fan Expo; for every kid whose comics savvy extends only to Dark Knight precursors like Alan Moore’s The Killing Joke, there are forty who will reprimand anyone who doesn’t know that it’s Dick Grayson, and not Bruce Wayne, who dons the Caped Crusader’s cowl in DC Comics’ current Batman continuity. (At Fan Expo 2008, I confused Hawkeye with Bullseye and was met with a rather deliberate eye-roll and a good deal of guff from one of the Expo’s innumerable Comic Book Guys, abruptly ending an otherwise pleasant conversation regarding the Avengers.)

Our Trekkie likely suffered torrents of abuse at the hands of the playground bully who couldn’t care less about the difference between a thermobaric cloud and a subspace compression anomaly. That he would revisit such abuse upon the unschooled poseur seems normal. Within contemporary nerd dynamics, the svelte, wisecracking hipster is the pariah, the exception to the rule. They’re the ones the dweebs relish picking on. Fan Expo is a real-life Revenge of the Nerds.

SO FORGET THE ADAM BRODY/Ellen Page/Jay Baruchel school of charming pop intelligentsia. More faithful to the geist of the modern fanboy is author Junot Díaz. In his Pulitzer-winning 2007 novel The Brief Wondrous Life of Oscar Wao, Díaz invested his titular protagonist with a depth of emotion rarely afforded more one-dimensional nerd archetypes. Oscar, though every bit the unlucky in love, lucky in Magic cards nerd, is neither overly caustic nor overly clever. A writer himself, Oscar’s need to compose epic tomes of sci-fi and fantasy literature—rather than merely consume Superman comics so he can toss out some pithy reference at a party—is what enlivens him.

These glimpses of a so-called prosumer culture serve as the Lantern’s light in Fan Expo’s darkest, most bottom-line-driven corners. Tucked away near the Exhibition Hall’s back wall, near Artist’s Alley, a couple dozen vendor tables host artists and writers hocking their own indie comics for a couple of bucks. A Seattle-based two-man “geek rock” outfit called Kirby Krackle sell CDs of songs with titles like “Zombie Apocalypse” and “Naked Wii.” Some of the more ambitious Expo-goers come in hopes of finding an artist with whom to collaborate on a comic project. It’s not uncommon to see aspiring illustrators walking around with oversized portfolios, drawings of big-busted Amazonians or barrel-chested men poking out, or hear amateur scribes meekly pitching their hyper-violent indie books to passersby. The desire for fans to throw themselves (and scads of their money) at the altar of Marvel is undercut—or perhaps complemented—by this desire to create independent art. To produce something in a community so dedicated to consumption.

This is, after all, a subculture in which every half-baked caped crusader or horror movie premise may prove a stepping stone to pseudo-stardom. The most recognizable names in comics got their start penning plots for D-list superheroes like Moon Knight and Aztec the Ultimate Man. Even Guest of Honour Bruce Campbell was once humbled by torrents of fake blood and other undead goop in the Evil Dead films.

But at Fan Expo, the amateur indie comic seems the hopeful precursor of the $500 sketch, not its disputant. Perhaps this is what is driving more and more casual fans to an event like this. Fandom is a thriving market, already in the throes of exploitation, and everyone wants a piece. Ask anyone who owns Detective Comics #27 (currently worth $525,000 US)—getting in on the ground floor is as fun as it is lucrative.

ON SATURDAY, while waiting to get into the exhibition hall, I notice a costumed man standing alone. Decked out in black skirt, cloak and face-covering veil, armoured in duct-taped shoulder pads, he stands stoically to the side of the main lineup, holding a piece of paper reading “LFG or Bust.” I don’t get it, but a young woman—twentyish, dolled up in a fedora, leather jacket, bullwhip and khaki hot pants—snaps a photo and beams sweetly. “You’re awesome, by the way.”

The poseur may land the chick in the faux-vintage Star Wars tee. But only a true believer warrants the affections of an Indiana Jones pinup girl.