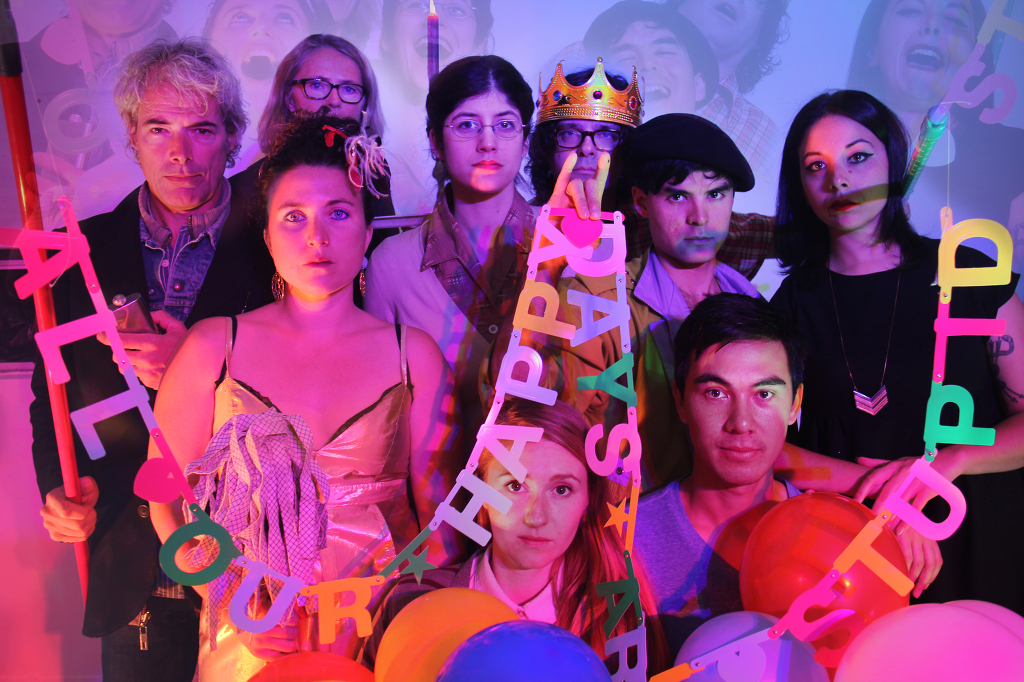 For anyone awake to contemporary Canadian fiction, assumptions loomed over the recent production of Sheila Heti's All Our Happy Days Are Stupid at Toronto's Videofag. The writing of the play, laid out in her 2010 novel How Should a Person Be?, had been the occasion of an artistic crisis. We already know all about the creative exertion, self-doubt, and feminist ambitions that Heti, a former Maisonneuve contributor, poured into the script. We know it was written in a basement apartment after the collapse of her marriage. We know the microdetails of the sex she had and the parties she frequented to avoid writing it. We’re even privy to Heti’s glib self-aggrandizement:

“I am writing a play. I am writing a play that is going to save the world. If it only saves three people, I will not be happy. If with this play the oil crisis is merely averted and our standard of living maintains itself at its current level, I will weep into my oatmeal. If this play does anything short of announcing the arrival of the next cock—I mean, messiah—I will shit into my oatmeal.”

In her novel, Heti pointed to the restrictions that theatre companies exert over new work. Her protagonists can’t run away from Paris to Cannes, she’s told, because action should be concentrated in one location, following the Aristotelian unities. To this, the character Margaux responded, “Man, they are missing out. I really feel like theatre hasn’t caught up from a 1930s awareness.” That 1930s awareness had until now consigned this play to Heti’s hard drive. (Both the novel and the play had their trouble being seen by anyone: How Should a Person Be? received a tepid response when first published in Canada, and was then turned down by at least six American publishers before it became the preeminent book to namedrop at house parties.)

The play, produced by Suburban Beast after ten years of confinement, begins with Jenny Oddis, wearing the smug, insistent pout of a little girl who wants to be taken seriously. “It’s awful being twelve,” she whines to her parents, while a parade passes by in the foreground of their Parisian vacation. What seems to be unfolding is something of a boilerplate children’s-book plot: Jenny, on the brink of puberty, feels underestimated and wants to shrug off childish things. Her parents aren’t so sure she’s ready: “I’ll pay attention in five or six years,” the matriarch sneers.

Jenny is delighted, then, when she recognizes her classmate, Daniel Sing, also taking in the festivities with his family. But their reunion is short-lived when Daniel goes missing.

From here, you might expect the drama to revolve around the search for Daniel, but his disappearance is treated almost as an afterthought, and Jenny’s preoccupation with it an annoyance. Jenny herself is abruptly discarded as the central protagonist. A silly interlude takes place, in which the hotel staff usurp the play, hosting a Masquerade Ball for a prince and his young bride. The music here, along with each scene transition, is composed by Dan Bejar, of Destroyer and the New Pornographers, and played by an unnamed troubadour. The delicate music lends dramatic weight to many of the scenes, juxtaposing the often-bizarre energy of the stage action, and accentuating the melancholy that runs throughout the play.

It’s in these moments of total spectacle, when all thirteen characters appear on stage, that the artful finagling of action and scenery is especially apparent. The set, which has a playing area of no more than five-and-a-half feet, is black and white and mostly bare. As a clever space-saver, different pieces of raised cardboard cutouts are used as the upstage backdrop. These all-purpose items are magnetic depictions of chairs, tables, the Eiffel tower, etc. Actors take them down and affix them to on-stage props to transform the scene from a boulevard to a banquet hall to the beach. In this fashion, a striking two-dimensionality is achieved: the eerie aesthetic of a children’s book drained of all colour. This, along with placards in Sharpie-scrawled cursive that explain location changes, makes an “unproducible” play possible.

It’s in the second act that the two real stars of the show cement their presence. Now in Cannes, wearing identical wigs of opposing white and black, the mothers of Daniel and Jenny have abandoned their families. Mrs. Oddis is the epitome of domestic crabbiness, and Mrs. Sing a haughty, nagging woman. Mrs. Oddis has ostensibly gone solo to begin a career as a flute player, and Mrs. Sing follows her in the throes of a one-way friend-crush. In the novel, Heti justifies tailing Margaux to an art festival in Miami on the pretext of discovering an authentic way to render their trip together: “I hoped that if we went away together, like the mothers in my play, I could later study the transcripts and figure out what reality had that my play did not.”

These scenes are some of the most hilarious and poignant in the production. Though clownish, they articulate a familiar central theme: that playacting can only approximate “authentic” expression. Just as in How Should a Person Be?, stilted attempts at “being yourself” through self-conscious roleplaying result in shallow caricature. The two women compete in their outrageousness, finding in each other much better matches than their lack-luster spouses. But amid our amusement, the sad moral of the play sinks in, a sort of cruel optimism where both women dog after hopes they know will elude them, but still value the chase as a source of happiness itself.

In the final scenes, the action returns to Paris. Daniel is found by the police, though most of the characters don’t seem to really care. Jenny has never seemed younger than when she cozies up to Daniel in his leather jacket. A cigarette dangling from his hand, he explains the joys of adulthood where “everything counts.” Daniel’s too cool for callow Jenny, who can’t help but be enchanted by him. We watch the first stings of adolescent rejection in what will be a long line of hurts. But eventually, Jenny and Daniel become more and more like their parents. “Don’t become the thing you hated” is the parting refrain of the play, sung like an elegy. It’s a warning to the youth of the play to not sink into their mothers’ manic parodies or their fathers’ pathetic resignations.

Because not many contemporary Canadian plays reject cohesive characters and plot, All Our Happy Days represents an interesting attempt to push Toronto theatre in a new direction. Tannahill’s choice to use actors alongside willing friends was shrewd—what certain performers lacked in finesse, they made up for in zeal.The contrast here between the high-camp mannerisms of practiced performers and the flat attempts of laymen created a nice, comic juxtaposition. At times, though, the non-actors took up too much air; the show could have benefited from a discerning dramaturge to make cuts without sacrificing the play’s general romp.

The play is for the most part unabashedly silly, but Tannahill’s depiction of parents trying not to be parents and kids trying not to be kids is genuinely affecting. Just like Heti’s novel, her play calls attention to its characters’ preening self-presentation, challenging audience members to scrutinize their own masks and pretensions. Indeed, considered side by side, the novel and the play leave us in a hall of mirrors, where life begets art and art begets and so on and so on.