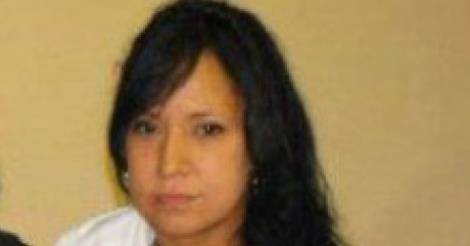 During the first-degree murder trial for the 2011 death of thirty-six-year-old Cree woman Cindy Gladue, the court viewed her preserved pelvic area, removed from the rest of her body, on a projector screen. Specifically, they were looking at an eleven-centimetre wound to her vagina that arguably caused her death, though this was attributed merely to “rough sex.” The non-Native man charged with her murder walked free.

Across the country, people organized around “Justice for Cindy.” In the two weeks since the trial concluded, outraged family members, activists and others concerned with the administration of justice have circulated a petition calling for an appeal. Solidarity rallies are scheduled to take place on April 2 in nearly twenty cities, from St. John’s to Vancouver, to honour Gladue’s life. The placards featured in online photographs read: “The Lives of Indigenous Women Matter,” “Indigenous Women’s Bodies are Not Terra Nullius,” and “Canada unfriended Justice.”

This is not an unfamiliar narrative. According to the Facebook page Justice for Cindy, this part March, United Nations Committee on the Elimination of Discrimination against Women said that Canada has “failed to ensure that Aboriginal women are protected against discrimination committed by public institutions.” Amnesty International says that this report marks the second time in two months that Canada’s failure to respond adequately to the staggeringly high rates of violence against Indigenous women and girls has been criticized by an international human rights body.

And it’s true. By now we have seen the hundreds of faces, art exhibits and sensational headlines, all representative of Indigenous women and girls who were murdered, missing and stolen from their communities. Bodies have been found everywhere from trails to riverbanks to ditches to hotel room bathtubs. Many families have no idea what happened to their family members and have no closure at all. The situation has resulted in renewed calls for a national inquiry, with numbers of reported cases from 1981 to 2012 now reaching over 1,200. Sadly, these statistics are three to four times higher than those representing non-Indigenous women.

After Cindy’s 2011 death, her mother took to her Facebook page: “I want to thank all of you for being friends with my daughter. She will be missed. Why would someone want to hurt her and take her away from us. This is very hard to deal with. Love you Cindy, miss you.” It is clear that Gladue was greatly loved, valued and appreciated. But many are now arguing that the Canadian justice system would never see Cindy Gladue this way.

Cindy Gladue’s trial is the latest in the constant string of tragedies. The mother of three was deprived of human dignity even after her death in an Edmonton hotel room due to injuries, which according to Brenda Belak of the Pivot Legal Society, the jury said resulted from “consensual sex,” even though Gladue had been intoxicated at her time of death—a state in which a person is unable to give consent.

Belak cites a Globe and Mail article by Kwagiulth scholar Sarah Hunt and Naomi Sayers, an Anishinaabe Kwe, Indigenous feminist and sex work activist with experience working in the trade: our legal system, she says, is completely failing Indigenous women and sex workers.

“In this case of Cindy Gladue, this resulted in the ultimate form of victim blaming: the jury’s inability to see her assailant as criminally responsible in death. Sayers and Hunt write, ‘The criminalization of prostitution conspired to make the victim’s sex work experience the origin of the violence she faced instead of placing fault in the violent actions of the assailant,’” Belak writes. “Editorial clarification of trial details after the piece was published does not alter the force of the authors’ fundamental premise, that Cindy Gladue was denied justice because she was an Indigenous woman and a sex worker.”

Lynda Budreau-Smaganis, a Cree Métis elder and friend, described the bright-eyed, brown-haired Gladue as “kind, caring and funny” in a recent CBC radio interview. She went on to say that people are in dismay that Gladue was not ascribed the same level of value and dignity that any other Canadian citizen would have been afforded during the legal process. “People that I have spoken to across the country are just in dismay that somebody could dismiss a life like that. Had she been an accountant it would have been a total different story,” she said.

In the same show, CBC host Anna Maria Tremonti interviewed Dino Bottos, the defence lawyer in the Gladue case. “A lot of people are taking this as, you know, simplistic reasoning that it’s he was a white male and he must have gotten off because she was an Aboriginal prostitute,” Bottos said. “And that’s just not a fair thing to say when you consider all of the evidence.”

In his view, the justice system did its job. “There are considerable concerns and prejudices in our criminal justice system towards Aboriginal people, so I get that. But you have to look at each case individually, and you have to look at the evidence of every case individually and all of these protesters, I have to say, with the greatest of respect, they were not in the courtroom. Very few people showed up for the trial itself and nobody sat through the whole trial in the spectator’s gallery that could really say they saw all of the evidence,” he said.

When it came to evidence, the presentation of Gladue’s preserved tissue—reportedly the first time that human tissue was used in a Canadian court—incensed many Aboriginal rights activists. As Âpihtawikosisân tweeted on March 31, “What happened to [Cindy Gladue], and the discussions surrounding her trial, is really messing with our heads. At every step, an outrage.”

In the National Post, Ryan Cormier recounts Gladue’s vagina being placed on a projector screen for the jurors to view. Cormier’s articles quotes Court of Queen’s Bench Justice Robert Graesser saying “I was kind of bracing myself, but it had a much milder effect on me than I thought it would. Frankly, the autopsy photos were tougher for me to look at than this clinical work. We’re not trying to shield the jury from anything here.”

This level of dehumanization and systemic, institutionalized racism is not new, and despite the reported statistics, the number of murdered and missing Indigenous women in Canada is difficult to discern.

In Rabble, Tracey Lindberg wrote: “To those who know the legacy of violence that impacts us as Indigenous women, there is no confusion. We know this fear, we know this dehumanization and we know the impact that it does not seem to have on the mindset of many, many Canadians … If we are unable to have violence acknowledged that Indigenous women face when physically ripped apart and with body parts on display before a jury, how confident can we be with the statistics that tell us how many of us have actually gone missing?”

Naomi Sayers expressed a similar sentiment on her blog, calling for acknowledgment and solutions to these bigger societal problems. “[I]t is beautiful to see people coming together to rally for justice. I do believe in writing letters calling for justice for Cindy Gladue. But I want to look for something more long term. What can be done to help protect Indigenous peoples, especially those in the sex trade or street economies, from gender and colonial violence? What are some things that people can start doing today? And start doing in our own communities whether the community be urban or rural?”

A letter addressed to the Chief Crown Prosecutor’s office in Edmonton serves as a template for the Justice for Cindy movement, which is reminiscent of the Idle No More rallies of 2012. The letter says that the criminal justice system utterly failed Gladue and her family, saying that the ruling effectively condones violence against Indigenous women, especially if they are poor or at risk: “Ms. Gladue was a daughter, a mother, a sister, a friend; in other words, a full human being with a rich life and a future she deserved to experience. That Ms. Gladue was an Indigenous woman who worked in the sex trade increased her vulnerability; it did not make her expendable. Yet the horrific circumstances of her death in June 2011 as they have been reported demonstrate that Ms. Gladue was regarded as exactly that by the man who murdered her and by the criminal justice system which has permitted him to commit such violence with impunity.”

The letter calls for an end to this continued violence and condemns the criminal justice system for its treatment of Gladue’s remains: “Like so many others, we regard the subjection of Ms. Gladue’s physical remains to live scrutiny inside the courtroom a gross violation of Ms. Gladue’s physical and spiritual integrity and extremely hurtful to her family in particular, to Indigenous women, and an affront to us all.”

The Toronto organizers of No More Silence, an international network to support activists, academics, researchers, agencies and communities to stop the murders and disappearances of Indigenous women, agree, but stop short of offering any faith in the system. “This verdict is an abomination—and it represents a larger pattern of deep and relentless violence by individuals and the state against Indigenous people. We support those who are calling for an appeal to the verdict in this trial—but we also know that for Indigenous women, especially sex workers, the court systems will never provide justice,” they say.

No More Silence organizers argue that Gladue’s story is not unique and is an example of the indifference of the Canadian justice system in the devaluing of Indigenous women, which has, in some way, an effect on all of us. To that end, Hunt and Sayers have this to say: “While Cindy’s family has been mourning her death for four years, [her death] should be one of mourning for all Canadians.”

Recently, at a theatre venue in downtown Vancouver, Leela Gilday, a Dene/Canadian singer-songwriter from Yellowknife, brought many in the crowd to tears with her song dedicated to a friend and to all of the missing and murdered women: “Sister, I am crying. We can’t forget them … tell me how long it will take for the world to see what really happens, years go by and yet our sisters still go missing and stolen. So many people have cried out injustice. Yet they say it seems we are still to blame for things that have happened to us. The truth shall be known … our voices are not being heard. We are only seeking justice.”

Samantha L. Dawson, a member of the Selkirk First Nation, is a law student at the University of British Columbia, where she works with the Indigenous Law Students’ Association. She’s a graduate of the journalism program at Ryerson University and is originally from the Yukon. Follow her on Twitter @samleedawson.