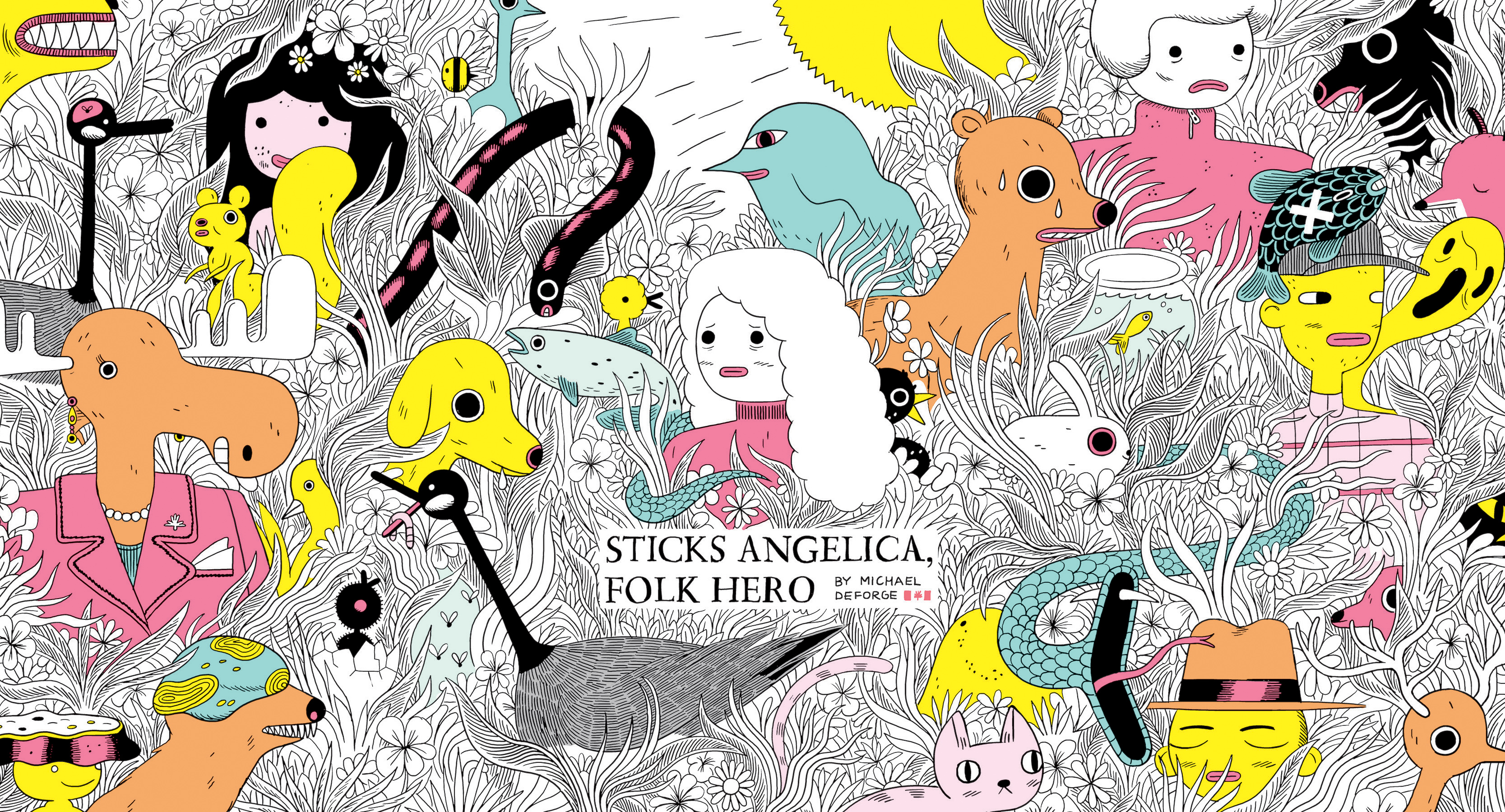 Michael DeForge’s latest, Sticks Angelica, Folk Hero, plays with the idea of identity, community and sense of self. In his first longform weekly comic after Ant Colony, DeForge turns from the acidic, grotesque universe of Colony to a surreal vision of Canada, and from cynicism to a softer, gentler tone.

Sticks Angelica decides to escape fame, the city and her family by settling in Monterey National Park and living off the grid. As a former bully, she awkwardly attempts to fit in with an intriguing array of characters that she both cares for and despises. When a reporter named Michael DeForge steps into this black-and-pink psychedelic daydream to write her biography, she buries him in the ground and stays in charge of her own narration.

The real-life DeForge—a prolific, twenty-nine-year-old cartoonist based in Toronto—has published with Drawn+Quarterly and Koyama Press, while designing and writing for Adventure Time. I caught up with DeForge to talk about storytelling, eating your vegetables and Canadians’ sense of identity.

Marie Brière de la Hosseraye: How did you go about building this world and the wide range of characters in Sticks Angelica?

Michael DeForge: I mostly improvised. I had a pretty clear idea of what Sticks’ personality would be like and her reasons for being in the valley. I wanted to include geese and a small animal companion of hers. For the most part it just built itself up organically, with an indefinitely large forest to write characters in. I had the core cast, but I could populate it however I wanted it.

MBDLH: Did you originally picture how the comic would look visually? Your choice of colours is much softer and more tender than usual.

MD: A lot of the aesthetics and design choices I made were a reaction to finishing Ant Colony a few months prior to starting Sticks. [Colony] had a lot of very small figures navigating a really sparse landscape with fixed shots of them wandering around. It was more of an old color Sunday strip like Gasoline Alley. I wanted Sticks to be very lush, and more like a Mark Trail or Mary Worth strip. Ant Colony was kind of morose; this was a lot more gentle and goofy. Instead of future neon colours, I wanted just one colour: a pink pastel, much more muted.

MBDLH: What about your relationship to language? In Sticks Angelica, you use play-on-words and a more poetic register than usual.

MD: My choice of language was another intentional shift from from Ant Colony. I wanted [Sticks] not to feel bleak, to have more wordplay and be more playful, goofy, even though I do write about serious issues. The tone has a gentle weirdness to it.

MBDLH: You are a really prolific comic artist and you play a lot with genre conventions. Do you need to switch it up between projects to not get bored?

MD: I try not to repeat myself; I get bored very easily. I like each project [to be] very tonally different from the other one. If I'm working on a colour strip, I want to be working on black and white simultaneously. Or very densely drawn and kind of minimal. Comics can be gruelling and repetitive. I'm like a fussy toddler tricking myself into eating vegetables.

MBDLH: Does the medium influence this? Did publishing Sticks on Tumblr on a regular basis shape the storytelling?

MD: More than online versus print, having long narratives serialized changes the way I write. I feel a lot more comfortable working on a long story by doing it in chapters or strips rather than trying to tackle a huge sprawling narrative all at once. It makes the plotting a lot more organic. If I was always thinking bigger picture, driving the story from point A to Point B, I wouldn't have room for little experiments and detours from the main narrative along the way, where I can surprise myself with where my characters go.

MBDLH: What fascinates you particularly with the idea of these failed utopian communities? There are many parallels drawn in your different works about that.

MD: It’s always just been something that I've enjoyed reading about. Some artists gravitate around communities, in arts groups. I was never a part of that, I didn't go to art school. So maybe I'm fascinated with it because I tend to be pretty solitary. I enjoy writing about types of hierarchies and systems on a smaller scale, with a group of people and the way they clash against each other. They're clearly all very concerned with what it's like to be forced to cohabitate with others and work together to build these reluctant communities.

MBDLH: You also touch on culture on a bigger scale. You play a lot with this sense of Canadian culture.

MD: I imagine a lot of my comics as being part of the same alternate universe, my weird Canada. In each one I write about a different aspect of Canadian identity. I like exploring that weird sense of Canadian identity. Sticks is specifically about [Canadians’] relationship with wilderness and celebrity. But I've done other comics like Spotting Deeror Canadian Royalty tackling other aspects of Canadianness.

MBDLH: What about this living-off-the-grid, coming back to nature idea?

MD: I think it's something that Canadians have. Even city-dwelling Canadians feel that kinship even though they don't actually have much of a relationship with the outdoors. Sticks was kind of making fun of that. She decides to go off on her own but even towards the end, where she’s a part of the forest, it’s still a pretty awkward fit.

MBDLH: Are your comics drawing you closer to what Canadian identity means to you?

MD: I think so. Part of these stories are me trying to get a clearer idea of it; that’s why I keep coming back to it. They have all these loose puzzle pieces. I hope it will all lead up to something but I won't know until I'm dead.

MBDLH: You’re used to inserting yourself in your comics. In Sticks, why did you picture yourself getting entangled in the landscape?

MD: I like writing versions of myself in comics, usually exaggerating some aspects of my personality. I wanted to show him getting so involved in this project that he ends up becoming part of the valley rather than someone documenting it. He turns into a resident sucked into his own dramas with the other characters there.

MBDLH: Does that happen when you’re working on a project for too long?

MD: Yeah, I can certainly feel that way, when your head is only in this one very specific place. You're spending so much writing these characters, they end up feeling like your roommates.

MBDLH: All of your characters are exploring their sense of self and trying to redefine their role in the community. Why are you so obsessed with transformation in your work?

MD: It’s hard to answer what prompts me without getting into too many specifics in my own life. But generally speaking, it can be really frustrating to reinvent or present yourself to the world the way you see yourself. I like writing about characters who have those sorts of struggles. It’s usually kind of messy and awkward, and sometimes very beautiful and sometimes very scary. That's probably why I keep coming back to it. I cannot imagine ever being finished exploring that, because there are so many angles to approach it from.

MBDLH: Did you go through a turning point when you decided to reinvent yourself?

MD: There are points in everyone's lives where they're struggling to define themselves. It might be a dramatic upheaval. Often it's a bunch of small things leading up to it across your entire life, rather than one single focal point. Sometimes things that seem very subtle and small end up becoming life changing in some way.

MBDLH: What’s next for you?

MD: I’m working on Leaving Richard's Valley every day, and I'm serializing a long graphic novel for subscribers through my Patreon. I tend to have small projects that will hopefully be pleasant surprises down the road, and some comics that might come out this summer. But in case I flake out, I probably shouldn't talk about it too much.

Michael DeForge will launch Sticks Angelica on March 16, 7 p.m., at Montreal’s D+Q bookstore (211 Bernard O) and a variety of other locations.