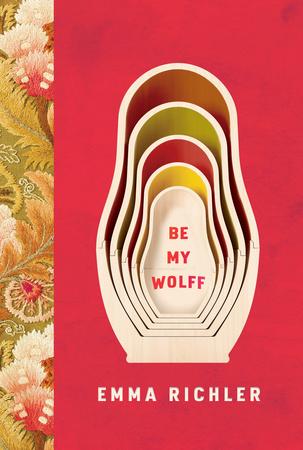 Emma Richler’s third novel, Be My Wolff (Knopf Canada), tells the story of the Wolffs, an eccentric family of Russian émigrés living in England—the father, Lev, is a pedagogically inclined scientist, and the mother, Katya, a choral director—and the strange attraction between their daughter Rachel and her adopted brother Zach, whom Lev and Katya plucked from an orphanage. Rachel and Zach are now adults, living together, as lovers, in Camden Town. Rachel is a mapmaker, illustrator and writer, and Zach is a prize-fighting boxer who, due to a serious injury, can no longer fight—or at least he shouldn’t.

Though Lev does not approve of their taboo relationship, Zach and Rachel remain intensely obsessed with each other. The novel Rachel is working on, Sam the Russian, is a story she and Zach started working on together as children, and it is very much a story about Zach.

The novel is shaped like a fractal: stories within stories, plots within plots, each of its many parts a replica of the whole. Such formal complexity, coupled with Richler’s esoteric and almost encyclopedic fascination with topics as disparate as Charles Dickens and pugilism, Russian folklore and chaos theory, will incite a certain kind of reader to search for patterns and shapes, much as Rachel does.

I met Richler earlier this March, at Penguin Canada’s Toronto office, where we spoke for forty-five minutes in a windowless boardroom.

Gavin Andrew Thomson: Elana Ferrante once wrote in a letter (quoted in Harper’s) to her publisher that the “story itself,” its words and its characters, “are only tools with which you circle around the evasive thing, unnamed and shapeless, which belongs only to you, and which is a sort of key to all the doors.” In this novel, is there some evasive, shapeless thing that you as the author are circling around—or within the novel, that Rachel is circling around within her own novel, Sam the Russian?

Emma Richler: Yes. Rachel does believe from the start that you have one destiny. There’s a character in the story that she invents, who keeps saying everyone has a part in a destiny, and she thinks essentially that there is really only ever one story to tell. I think that writers, too, carry on writing the same book in a certain way. It takes on a different shape, all the time. If you read Ferrante, for instance, she too writes the same thing all the time, but obviously it takes a very different shape. If you read her first novel, she’s very intense. I think most serious writers have one thing that they’re attached to, and they just write it in different ways, but their obsessions are the same, whether it’s with family, memory, place, or all these things—they become richer, hopefully, and more interesting, as one goes.

GAT: Does the dynamic between Rachel, Zach and Lev constitute what in Russian fairy tales is called a “three-body problem”?

ER: The three-body problem is actually a scientific concept about gravitational orbits and reflection. But it’s also something that Rachel sees in most stories—that the essential relationship is with one another, and whatever falls into the orbit of these two circulating planets will tip the balance. So for her, it’s a three-body problem.

GAT: There’s a passage in the novel, “Patterns are clues to nature.” Rachel seeks patterns, by constructing maps and illustrating and telling her story of Sam the Russian. She’s also obsessed with the notion of a “strange attractor.” Is she searching for something like nature, or reality, through patterns?

ER: There’s something very beautiful about these scientific terms. [Rachel]’s imbued in the study of science because her father, who was a scientist of emergence theory and chaos theory, tries to nurture that in her. He adores her, and he teachers her and has her repeat things. She has absorbed so many of his lessons, but she applies them in a different way—a way that he would never suspect. A “strange attractor” is a technical concept that describes the arc of behaviour over time, and it does actually create beautiful shapes. For this idea to be a called a “strange attractor” is beautiful to Rachel. She finds a lot of accidental poetry in it.

GAT: Her attraction to Zach is also a strange attraction.

ER: It is! A strange attractor is also unpredictable, in its behaviour. The initial conditions can determine a certain outcome, but it doesn’t mean the outcome is predictable, and yet it is set. So, all of these things speak to Rachel because she is so fascinated by destiny and fate, and she wonders if she and Zach can evade what she sees coming.

GAT: You’re quite faithful to the veracity of certain historical texts and documents. How did you come upon these texts and incorporate them into your story?

ER: I always had a romance with Russia. I don’t know why. I couldn’t tell you, and that’s probably a good thing. It just came to fruition here. I’ve always read a lot of Russian literature. Also, as a child and an as adolescent, I used to paint soldiers. I was fascinated by the Napoleonic wars. I collected and painted soldiers for years.

ER: I think so. I’ve always read about Napoleonic wars, so I had a lot of books already, and one book will send you to another. Research is sort of conscious and unconscious. I’ve learned to trust that, when I have an instinct to read about something, there’s a reason for it—even though I don’t understand it at the time. So, I found myself reading a lot about boxing and pugilism, finding all sorts of weird texts. I was reading about rats. I found this incredible facsimile about how to attract rats and kill them. I never know, when I’m reading, quite what I’ll use, and it’s usually something not obvious, some strange details that attract you. It somehow all made sense.

GAT: You’re interested not only in historical documents, but also in songs and folklore, orature that’s passed down. There’s a passage: “hearing is so much older than speech.” And there’s another passage about how birds pass down familiar vocalizations—or birdsong—through inherited brain cells. It’s almost a kind of avian folklore.

ER: Tasha [Rachel’s aunt] often says—and in this is true in the tradition of Russian choral singing—the only true instrument is the human voice. She is a kind of epic storyteller. She talks about the Tsar who found that there was a danger in storytelling, that storytelling infects the peasant with desires and wishes and knowledge that threaten the powers that be. These storytellers would have their tongues cut out. At one point, Tasha feels that she’s accidentally betrayed Zach and Rachel, and she says, “cut out my tongue.” Again, if I had been conscious of this when I was writing, it would have been impossible, but I think there is a universality to music. It’s a language that can reach everybody.

GAT: The style of this book is influenced by Rachel’s sensibility, and it’s definitely a risky style. Why so many exclamation marks?

ER: You can only write a book the way it sounds in your head, and that was the sound of this book. Zach and Rachel have the most extraordinary, intense relationship, from their childhoods. When he arrives he’s young, he’s guarded, he’s knocking up against the world and she in a sense civilizes him, or finds a way for him to apply the intelligence and energy he has, as far as she can. They develop a language. They read about boxing and regency England and adopt the slang—that’s one of the ways they make their nest.

ER: Indeed, and so is music. Zach accidentally has a good ear. He’s able to sing, even though he has no interest in singing.

GAT: And even though he gets punched in the ear!

ER: They have song, and shared memories of folktales and the stories Tasha tells them. Everything contributes to this very internal, very private world, which is their safe place.

GAT: Their private language provides them a home.

ER: But the exclamation marks? I actually took out quite a few! And I was only able to do that towards the end. I had to be judicious to make the ones that were there effective. Zach and Rachel’s existence is heightened. There is little repose, even though they spend lots of time in bed, there’s little actual rest. They are two vibrant spirits. It’s febrile, and that’s just how they speak. They’re not shouting at each other. It’s emphatic. It’s strong and highly charged. He’s a flame that goes out quickly. So the way they speak had to be that way.

GAT: This interview is for Maisonneuve, so naturally I must ask about Montréal and your father, and how these two have shaped your work. I know this book doesn’t at all take place in Montreal, but how has the city influenced your work?

ER: There’s no Canada in this book, but the sensibility, specifically of Montreal—I still miss Montreal. When my family and I first came to Montreal from England, when I was eleven or twelve, I missed England, but I did fall in love with a number of things about Montreal that I still miss. It has a more bearing, physically, in my first two books. There’s nothing of it here. And Dad? I miss him tremendously. I wish he would’ve—he would’ve been pleased, I think. You know, we became sort of colleagues, in a way. I don’t talk with other writers about work; I just work. And Daddy never did, either. But when I was writing the second book, just before the first one came out—he died that year—he would ring me up, and he’d invite me for a drink, and we’d sit at a pub together like colleagues, and he’d say, “How’s it going?” And I’d think, He’s asking me about my work. I’d say, “How’s yours?” And he’d say, “Oh, you know.” [Laughs.] It was special. But the way he influenced me? It was just his discipline. I couldn’t do it any other way either. Even though my patterns of work are different from his, it’s still a daily process, and he worked hard. I knew how hard it was, which was partly why I didn’t start working until I knew I was compelled that I had to. There wasn’t any other way of avoiding it.

GAT: When was that?

ER: In ’98. I wrote the first sentence of Sister Crazy, which word-for-word was what ended up being published fifteen months later.

GAT: Wow. I don’t think any other writer could say that!

ER: I didn’t know where it would lead, or what I was doing, but I remember sighing. I had this sense that my life was beginning. I thought I was writing stories. I showed it to my mother and she said, “Your father needs to see this.” But we are completely different writers. He was very surprised by it. He said he found some of it uncanny. He found the children’s voices uncanny.

GAT: Did he think you would write?

ER: I found out later, after his death, that no, he wasn’t surprised, but I didn’t know he was expecting it.

GAT: He knew before you did?