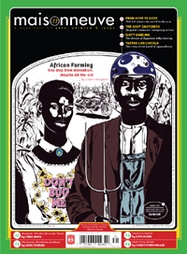 What does Gary Busey taste like? Cleanse your palate of B-list Hollywood clichés and concentrate. Bouquet of barbeque sauce, Elmer’s glue and chicken taquitos? Hints of eucalyptus, Winston’s and ranch-flavored beef jerky? Cherry Ring Pops with a Robitussin finish?

It sounds like a party-game question, but not for Amelia Fedo. The Italian-American nineteen-year-old can confidently describe the specific effect of Gary Busey on her tongue. She can also provide flavors for Billy Zane, Gary Coleman, Condoleezza Rice and Alf.

Fedo has lexical-gustatory synaesthesia, a rare condition where units of speech trigger involuntary sensations of taste. When Fedo reads “Gary,” for example, the word surfaces in her mouth as “this cranberry sort of flavor, but with the consistency of a hard strawberry not the softness of boiled cranberries.” How about “Busey”? String cheese. “And when I say string cheese,” she quickly explains, “it’s specifically a strand of cheese peeled off.”

Fedo can taste you, too. A message on her website reads, “I taste proper nouns, like names. If you want me to post your first name on the site with its corresponding taste, email me!” Committed to educating the lay population about her condition, Fredo responds to requests with meticulous precision. Within Amelia’s catalogue of name-tastes, “Roy” is unseasoned kidney beans straight from the can, “Fiona” is a boiled cube of potato, “Taylor” is smooth peanut butter on Wonder bread, “Maria” is undercooked rice and “Danielle” is the rind around the edge of a bologna slice. (Tough break, Danielle.)

These associations sound random, but they actually follow a semi-predictable logic. “Abraham Lincoln is one of my favorite historical names to taste,” Fedo says, speaking at breakneck speed. “Lincoln is carrots, but Abraham is like prosciutto.” The rhyme within Fedo’s Abraham-flavor—ham, in Italian, is prosciutto—illustrates a basic phonetic principle that guides gustatory synaesthesia: words similar to certain foods will often embody the qualities of that food (even if the speech-sounds, called phonemes, are submerged inside a different, larger word; so that “cinema” tastes like “mince”). For Fedo, “Europe” is tied to maple syrup and “Tony” evokes macaroni. Because non-synaesthetes tend to make similar associations, researchers hope synaesthesia can lead to a better understanding of how our brains process information.

Since it was first investigated in the 1800s, theories about synaesthesia have come and gone. Although no longer considered a disorder or mental illness, the phenomenon is still on the outskirts of conventional explanation. One idea, based on research by Daphne Maurer and Catherine Mondloch at McMaster University in Ontario, is that all infants undergo a multisensory phase. As babies, we don’t just hear our mother's voice, we also see it and smell it. At a critical period in early development non-synaesthetes sort themselves out, while the sensory inputs of congenital synaesthetes’ (like Fedo) permanently fuse. Other scientists speculate that everyone’s brain is programmed for synaesthetia, but only in a few individuals—25,000 worldwide—is it switched on.

Some researchers believe the number is even higher (as much as one in 200). Childhood ridicule, or fears of freakishness, might stop synaesthetics from speaking out. Others might go through life serenely thinking their cross-talking senses are entirely normal. And then there are those who draw on their boosted perceptions under the guise of producting art. Synaesthesia is given as the reason for Van Gogh’s visceral sunflowers or Nabokov’s dazzling metaphors (“the locomotive, working rapidly with its elbows, hurried through a pine forest”).

But while little is known about the condition’s origin, one thing is certain: the experience is real. Neuroscientists have identified more than one hundred synaesthetic variations, and the sensory combinations appear infinite. In the most common, called grapheme-color synaesthesia, numbers and letters are transformed into brilliant colours (Nobel prize-winning physicist Richard Feynman claimed to encounter equations as “light-tan j's, slightly violet-bluish n's, and dark brown x's”). With sound-color synaesthesia (or chromesthesia), certain sounds—a doorbell, a barking dog, a guitar chord—elict powerful visual episodes. Other synaesthetics see their orgasms. Some can hear fabrics, taste shapes, and smell their pain. After forty-six years, Sean Day, an independent researcher and synaesthete, is inured to his own neural prompt. “Every morning I have a cup of coffee, and every morning I see a cool, oily green blob. It doesn’t exactly amaze or fascinate me anymore.”

In more exceptional cases, sensory processing finds itself married to emotional information, so that letters, foods, household items, even days of the week are invested with moods or distinct personalities. Touching denim might give rise to overwhelming feelings of depression. The letter P becomes a film buff with a Kubrick obsession, while H might have the temperament of a disgruntled wolverine. One synaesthete who assigns human traits to food describes broccoli as “something of an emotionally strong, but slightly awkward man, often pushed to the role of sidekick.” Another sees the same vegetable very differently: “my broccoli is a rebel, poetic—and possibly smokes marijuana.”

Rarely satisfied with non-specific terms like “sour” or “red,” Fedo takes great pains to convey her exceptionally subjective perceptions, though sometimes the language of her nerve impulses is lost in translation. “Some words have a texture that is indefinable.” For all her scrupulousness, efforts at educating friends about her condition has led to mixed results. She is still asked whether tasting words is akin to being on an endless high. “Most kids only know that synaesthesia can happen when you drop too much acid,” she says.

Sense-jumbling hallucinations coaxed into consciousness by LSD, however, tend to be different than true neurological synaesthesia. For one thing, aside from being a potential distraction, synaesthesia doesn’t interfere with daily functioning. “The only time it bothers me is when I’m hungry or I don’t feel well and the last thing I want to think about is food,” says Fedo, who finds it necessary to make cheeseburger runs after a hefty dose of classroom reading.

But like most synaesthetes, she wouldn’t dream of parting with her unique sensory gift. Synaesthesia augments Fedo’s ability to interpret the world. More specifically, it enhances her pleasure in food. “Sometimes if I’m eating, I’ll start thinking about words and I’ll get a bonus taste in my brain,” she says with a giggle. “My brain is weird in various ways.”