“GIVE ME MONEY!” “Donnes-moi d’argent!” Go for a walk through rural Kenya, or a town in Rwanda, or downtown Lusaka, or almost anywhere south of the Sahara and north of Botswana, and at some point children will rush up to you and make that appeal. Not beggars, you understand, just kids hanging out and playing—until they see someone rich.

It’s easy, and wrong, to think of such children as Africa writ small, to imagine the whole continent as desperate for handouts, afflicted with the famous “culture of dependency.” The prevailing attitude is that white people screwed up the place, so white people must pony up to fix it. That attitude exists among Westerners and Africans alike, and aid agencies do nothing but strengthen the sentiment. But it’s really just a symptom.

Africa’s fundamental problem is the omnipresent notion that good things do not come from striving, but only from providence; that the key to success and happiness is “seize opportunity when it knocks,” not “fight to make what you want happen.”  Ever hear of attribution theory? It claims that happy people view personal triumphs as the result of their inherent qualities, and setbacks as flukes caused by external forces, while depressed people see the reverse. Well, if there’s such a thing as cultural attribution, then Africa is afflicted by a strange and pathological version of it; many of its inhabitants see everything, good or bad, as the result of external chance.

Why? Because it’s true. Across sub-Saharan Africa, fortune is so fickle that effort is rarely rewarded. So many factors can and do torpedo ambition: corruption, disease, drought, natural disaster, tribal politics, power cuts, bad tourist PR, incompetent leaders, etc. The same fatalism that helps African citizens cope with the endless slings and arrows hurled in their direction also leads inevitably, and correctly, to a “striving doesn’t work” mentality.

Is there hope? Of course there’s hope—but it doesn’t come from the West. I’m with Paul Theroux, Graham Hancock, Dambisa Moyo, Hernando de Soto and pretty much everybody I’ve ever met in Africa who is not part of the aid industry: most development aid is actively harmful. Selling goods for less than production cost is dumping, a business practice condemned as predatory because it undercuts nascent producers who can’t compete with below-market prices. Aid is just dumping with the price set to zero. Medical aid and disaster relief are necessary. There might even be a few other aid projects actually worth the effort poured into them. But in general, I say kill it all.

The horror stories are legion. Donated clothes decimate local textile industries. Shells of buildings, silted dams, and unfinished “pilot projects” dot the African landscape. Food-aid convoys in Sudan tithed most of their cargo to the warring forces in exchange for safe passage, perpetuating the very conflict they were trying to alleviate. Young white people flock to expensive hotels in brand-new four-wheel-drives for useless “conferences” that amount to paid exotic vacations. Peace Corps yahoos are trained and flown out at great cost to teach Western hairdressing or dig wells that people will never use.

And that’s without going into the soft side effects of that horrifying “culture of dependency.” In Zimbabwe, for example, before Mugabe went mad, a rural community deliberately allowed water to pool and destroy a dam, because then the Norwegians who built it would come back to fix it and spend more money. But aid’s worst consequence is the continuation, and amplification, of the attitude that change must always come from outside. My friend Gavin Chait calls it “the recolonization of Africa through aid.” 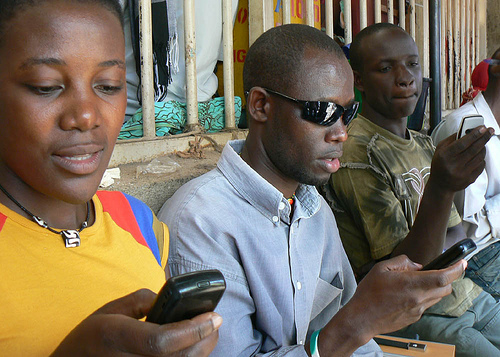 Still, it’s Africa’s governments, not its NGOs, that are primarily at fault for the continent’s pervasive fatalism. The whole point of government is to create an environment where striving for success is a realistic option. Most African governments fail spectacularly: tribal, incompetent, inefficient, unbelievably bureaucratic, jawdroppingly corrupt, they are machines built to rob people rather than help them.

The influence of a meritocratic middle class might restrain the kleptocrats, and exemplify how striving leads to success—but only if they were also members of a majority ethnic group. (Asian or Lebanese minorities often run sub-Saharan Africa’s most successful businesses.) So how do you get an African middle class? Education is important, but it isn’t enough. An average kid with time, tools and a full belly will always outperform a genius kid who comes in hungry from fieldwork. No, to become middle-class, first you do what every smart African who can afford to does: you get the hell out of the place.

But not forever. Despite what the media tells you, Africa is not war-torn Darfur or Somalia. Most African nations are phenomenally beautiful, oozing with untapped potential, places to go back to. In the meantime, the African diaspora, connected via phone cards and the internet, send money back to their relatives, or divide their time between the First World and their homeland.

The second migration, just as important, is rural to urban. I used to wonder why the gargantuan shantytowns that surround African cities—anarchic, filthy, often violent—even existed. I’d far rather live in a rural village. But those who move from the country to the shantytowns are willing to risk that misery in exchange for a shot at a new life and success. Most will fail. But they connect the cities to the villages. Like the overseas diaspora, they too send remittances; they support friends and relatives who also come and try their luck in the big city; and they’re how ideas, money and education flow from town to mud hut.

Of course, they have a little help from an amazing revolution that has swept across the so-called Dark Continent. Hop in a matatu, walk down a road, stop in a remote village for a Coke, and what do you see? Cell phones by the thousand: worn on lanyards by individuals, or rented by the minute at roadside stalls. “They walk for half a day just to reach a road, and then they pull out a mobile,” marvels a friend who lives in Africa. According to the World Bank, one in five Africans has a cell phone; that’s roughly one per family. For the first time in the continent’s history, people can talk (and text) to their faraway family and friends.

The better the communication links, the tighter the bonds, the more overseas Africans can and will send remittances, invest capital, provide know-how and new tools, chip away at the colossal inefficiencies that consume so much of Africa’s vast potential and pull their extended families up into a new middle class. The same process can echo out from the shantytowns to the rural villages, hoisting the next generation into position to make the same leap. That’s the great hope.

But wait: here’s an even greater one. Most of the developing world leapfrogged over copper-wire landlines straight to cell phones. What if, similarly, they are about to jump from abaci straight to smartphones, hardly touching computers in between? And what if that changes, well, everything?

This isn’t just pie-in-the-sky Pollyannaism. Yes, cell phones in Africa are the economic equivalents of cars here, and today’s smartphones are Ferraris. But in 2004, a new Motorola RAZR cost $650. Today? $75. That’s what today’s Androids, BlackBerries and iPhones will cost in 2014, by which time they’ll have permeated even mud huts and ramshackle shantytowns. And they’ll all be bought with cold hard cash—Africa’s peerless mobile-phone industry is mostly private, viciously competitive and quite profitable.

It’s hard to overstate what a huge difference those smartphones are likely to make. Today, only 3 percent of Africans have any internet access at all. Their smartphone revolution will be like our three information revolutions—computer, internet, mobile—happening all at once.

In 1978, China was poorer than all but a few corners of Africa are today. Then Deng Xiaoping introduced structural reforms, and thirty years on, the Middle Kingdom is a superpower. Putting the internet at the fingertips of hundreds of millions of Africans for the very first time will mark a transformation no less significant than Deng’s reforms. It’s easy to imagine this information revolution triggering growth comparable to that of China and India since the 1970s; growth that in only a few years could create far more wealth than all the lost decades and squandered billions of aid.

Will that happen? God knows. AIDS alone may end that hope entirely. (Its prevalence, despite massive public education, is another artifact of Africa’s fatalism.) Corruption, tribalism or sheer brutal dictatorship might destroy it, as in Zimbabwe. But there is hope, and it’s real and tangible. We might help provide the technology, but the ultimate solutions lie within Africa. We can do our part, by buying African, spending tourist dollars, and helping with disaster relief. But real hope, real change, doesn’t come from outside, and never will.