AT A TIME WHEN WALLETS are being pinched, the penny-wisdom of open-source software—applications built by volunteers and distributed online without charge—has never seemed smarter. Free programs can now be downloaded that are competitive with brand-name titles in areas like word processing, graphic design, and multimedia creation. Even the federal government is eyeing open-source as a way to trim expenses. This means democracy might come out the winner as well.

All software owes its existence to source code, i.e., programming DNA that tells an application how to function. Unlike proprietary software, open-source code isn’t controlled by a single vendor and thus isn’t “user-subjugating,” to use a term coined by Richard Stallman, who, in 1983, designed one of the first shareable operating systems that would work on any computer and run any program. “Free software,” he said, “is a matter of liberty, not price.” The goal, in other words, isn’t to hand out freebies but to free consumers. Once acquired, open-source programs don’t require you to pay licence fees for upgrades, security patches and technical support (because users are invited to make changes to the code, the programs are constantly being tested and improved). Moreover, content isn’t “locked in” by commercial restrictions; documents are accessible to everybody.

Many of us use three of the most popular open-source applications every day without knowing it. Almost half of the world’s websites are delivered to browsers from computers running Apache, a web server maintained by an open community of developers. In turn, most of the websites that Apache serves up have been designed with PHP, a general-purpose language created to manage web content like shopping carts, site searches and event calendars. And where is all that information stored? On MySQL databases. MySQL’s high compatibility with different operating systems and platforms—a key open-source principle—is why it’s been embraced by Facebook, Wikipedia and Google. Needless to stay, all of these open-source programs are available gratis.

Cost-saving is clearly a big reason the federal government is studying what it calls “No Charge Licensed Software.” This January, Public Works and Government Services Canada sent out an official request to the software industry and interested parties for feedback. They have a lot of ground to cover. A recent study by the Georgia Institute of Technology, sponsored by open-source developer Red Hat, ranked the Canadian government thirty-fourth out of seventy-five countries in terms of open-source activity and adoption. In the categories of “industry” and “community” Canada scored significantly higher at sixteenth and seventeenth, respectively. These findings suggest the federal government has not been keeping pace with software trends as diligently as its citizens—possibly at the expense of taxpayers. 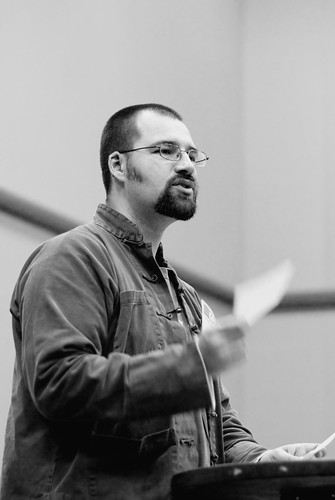 Vancouver’s Zak Greant has been involved in open-source communities for many years. He hopes the government will realize that open-source provides other benefits besides cutting costs. “It gives civil servants the ability to actually serve people,” he explains, “and gives them more control over their job.”

One advantage of open-source is that it uses “open standards.” Proprietary file formats are effectively closed to rival programs. But open-standard software like OpenOffice.org—designed to directly compete with the omnipresent Microsoft Office suite—allows anybody to read, edit and create common word-processing, spreadsheet and database files.

Greant says that guaranteeing such information isn’t locked into a single format should be a priority for governments. “Say you’re a municipal government and you decide to release all of your documentation in Microsoft Word format. Without OpenOffice, you would basically be forced to buy or pirate a copy of Microsoft Word to read something that you have paid with tax dollars to have produced. That’s crazy. We want to ensure that there’s always a free option that citizens can use, so that we’re not gating access to information based on someone’s earning ability.”

According to Greant, there is no better example of the damage proprietary software can inflict on democracy than the use of electronic voting machines. In a paper voting process, everybody can observe the steps involved. “With voting machines,” Greant says, “they use software to implement all of those steps with one big difference: you can’t view what’s happening underneath. We wouldn’t accept that in a physical system, but we’ve accepted it in voting machines because we don’t tend to think about software in the same way yet.”

Ideally, Greant says, any government process involving software would use open-source so that the public can audit the process. When Australia moved to open-source voting machines in 2001, the system’s source code was first posted on the internet for everyone to see and evaluate.

This May, Vancouver became Canada’s first municipality to pass a motion endorsing an open-standards and open-data policy. Put forward by Andrea Reimer of the Vision Vancouver party, the motion states that Vancouver “will freely share with citizens, businesses and other jurisdictions the greatest amount of data possible while respecting privacy and security concerns.” Democratizing data, Reimer believes, leads to a stronger democracy.

One area where an open-standards policy could have an immediate effect is with the Vancouver city council meetings themselves. Right now, video footage is available online in a format designed for Microsoft’s Windows Media Player. Although Media Player can currently be downloaded for free, it isn’t open-source and doesn’t run on every operating system, meaning the meetings are not accessible to all Vancouverites (outdated operating systems also frustrate city councillors who often can’t view online broadcasts on their own computers). By using an open format video software, such as Theora, the city could ensure that no compatibility obstacles get in the way of citizens receiving information.

Of course, adopting open-source means Vancouver could also be getting a sweet deal in terms of software costs. Greant, however, sees the open-source and open-data movements as the latest in a long line of democratic advances towards greater government transparency.

“If you look at societies we consider free, they share one very important commonality,” he explains. “The bulk of their civil and governmental processes are public and open. So as we move to a state where more and more of our government’s administrative burden is shouldered by computers, it’s important that nothing stop the trend toward increased openness and access. The dream of a just society depends on it.”