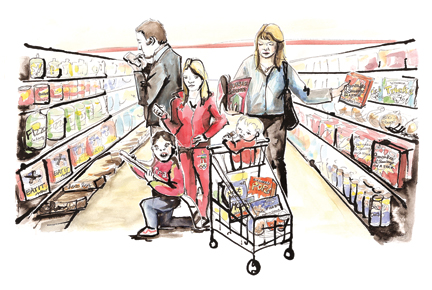 "HAPPINESS IS LOVE," says Mrs. Morris on an eponymous track from Charles Spearin’s The Happiness Project. Spearin, a member of Broken Social Scene, recorded his conversations with neighbours in the summer of 2008 and crafted songs from the accidental melodies of their voices. For content, he asked what made them happy.

According to Spearin, Mrs. Morris “genuinely loves the people around her and gets a lot of satisfaction from the simple things.” Vanessa, born deaf, describes the first time she received a cochlear implant: “All of a sudden I felt my body moving in sound.” Then there’s Mr. Gowrie, who talks glowingly about growing up poor in Trinidad and snorts, “Here, everything is commercial.” For Spearin, these answers confirmed what research into the relationship between income levels and life satisfaction had already discovered. “Above a certain threshold, which is actually pretty low,” he says, “wealth has very little to do with happiness.”

Everyone knows this, or claims to. Yet the belief that money can buy happiness is pervasive: a rise in a country’s national income will, we’re told, have a corresponding effect on collective well-being. Gross Domestic Product (GDP), tracks the ups and downs of a country’s wealth. Expressed as a rate of growth, GDP keeps tabs on all goods and services produced within a country in a given period. A negative rate means the economy is producing less than it did the previous year, which would indicate higher unemployment and a lower standard of living. So influential is GDP—and the gospel of endless growth it encourages policy-makers to preach—the New York Times called it “a celebrity among statistics, a giant calculator strutting about adding up every bit of paid activity.”

Yet this statistical superstar is getting some knocks. “GDP,” says former Saskatchewan premier Roy Romanow, “has emerged as a surrogate for wellbeing. But GDP doesn’t distinguish between activities that are good and those that are bad for our society.”

In other words, GDP doesn’t care how happy we are. Misery-bringers like hurricanes are GDP boosters; survivors buy things to replace all that they’ve lost. Cleaning up the 1989 Exxon Valdez oil spill added $4.5 billion us to the economy. Another GDP winner? The crushing cost of treating preventable diseases—those caused by avoidable human behaviours like smoking. Why? Because money spent on cigarettes and health care grows the economy. To get really macabre, Canada’s high lung cancer death rate (nearly nineteen thousand men and women per year) could also be considered a gain for the marketplace: casket, funeral, cemetery workers. A healthy GDP, in other words, can be lethal. Even the term’s inventor, economist Simon Kuznets, has doubts: “the welfare of a nation can scarcely be inferred from a measure of national income as defined by the GDP.”

What’s needed, says Romanow, “is a more holistic view.” To that end, a new experiment, called the Canadian Index of Wellbeing (CIW)—which Romanow chairs—tries to counterbalance strictly economic measurements of prosperity. Launched last June by the University of Waterloo-affiliated Institute of Wellbeing, the CIW intends to provide regular report cards on eight social indicators ignored by economists: our standard of living; our health; the quality of our environment; our education; how we use our time; the vitality of our communities; our participation in the democratic process; and the state of our culture.

What frustrates Romanow about all the emphasis the world’s governments place on GDP is that, even in terms of what it’s supposed to do—gauge material well-being—it falls short. When the first CIW reports in the eight-part series were released at the launch, they revealed that Canada’s GDP per capita rose steadily since 1981 while income inequality skyrocketed (the country’s top 20 percent of earners did gangbusters) and salaries stagnated. GDP’s true value, Romanow suggests, is as a negative measurement: “What does it leave out? And what are the consequences of this omission?” That’s where the CIW steps in. Its ambition is nothing less than to change how Canadians measure a good life.

Right now, your economic activity might be tallied this way: How much did you spend on groceries? How much is your house worth? How expensive was your car? How much do you make at work? How successful is your employer? Here’s how that looks through the CIW lens: Is the fruit you bought local or did it travel from afar? Do you feel a sense of community where you live? How much greenhouse gas does your car emit? Do you enjoy your job? How much free time does it give you? Does your company produce things that are good or bad for society? From the perspective of a card-carrying GDPer, these questions might seem a tad naïve, but the CIW hopes to prompt a rethink of what John Ralston Saul has described as a “low-level, utilitarian, narrow approach to economics.”

GDP skepticism is far from new. In 1972, Jigme Singye Wangchuck, then King of Bhutan, wanted to build an economy focused on people rather than growth. He proposed the policy of Gross National Happiness (GNH). A newly minted parliamentary democracy—the King introduced democratic reform last year to add to his people’s happiness—Bhutan has written GNH into its constitution. Dasho Karma Ura, head of the Centre of Bhutan Studies, which developed the new indicators based on extensive surveys (“How stressed are you?” “Have you ever thought of suicide?”), defines GNH as the “responsibility of the state to create a situation where individuals can pursue happiness.”

What, according to the surveys, makes the Bhutanese sad? The dilution of their culture, loss of community and traditional values, and harm to the environment. To address this, GNH led to a ban on public smoking. Twenty-six percent of Bhutanese land is now under environmental protection, and no logging is allowed in old growth forests. The country also focuses on “high-value, low-impact” tourism (in a bid to chase off back-packers, tourists are charged a minimum daily tariff), and infrastructure is constructed from traditional designs to preserve Bhutan’s distinct cultural identity. “If a project or program is anti-GNH,” says Ura, “then it has to be rejected or reviewed, depending on the severity of harm caused.”

The CIW was inspired by Bhutan’s experiment, but to see how it might work, we can look to another Canadian example: the Genuine Progress Index (GPI). The brainchild of Dr. Ron Colman, the GPI is the product of thirteen years of painstaking number-crunching on how Nova Scotians live and work. “If you don’t count something, it doesn’t get attention,” Colman explained in 2008. He’s right. A GPI report on chronic disease, which showed that 25 percent of medical costs ($500 million) in Nova Scotia were attributable to preventable factors, motivated provincial policy changes. “Our reports were a fairly significant influence in the creation of the new Department of Health Promotion,” says Colman.

Last summer, GPI Atlantic, the Halifax-based think tank Colman leads, released “New Policy Directions for Nova Scotia.” Included in the 185-page report is an idea Colman’s institute had been advocating for years before it was made popular by the recent recession: work sharing. The report gathered information on several Nova Scotia companies that took advantage of a decades-old federal government plan enabling employees to work a four-day week and receive EI benefits for the fifth day, thus avoiding layoffs and the societal damage they cause. GPI Atlantic discovered that work sharing had another unexpected benefit: it increased productivity. A 10 percent reduction in work hours could produce a 5 percent rise in productivity. According to GPI Atlantic, redistribution of work hours reduced work-related stress, enhanced well-being and acted as a job creation strategy.

Not everyone likes the idea of screening policy decisions according to their happiness-maximizing potential. Richard Kelly, senior economist at TD Bank Financial Group, contends that the CIW involves “qualitative features of life you couldn’t quantify, because everyone is going to have a different opinion to how they would measure the quality of their well-being.” However, Lynne Slotek, National Project Director of the CIW, says the CIW isn’t about making value judgments but, rather, establishing a framework of values derived through intense consultations with Canadians. Far from fuzzy and feel-good, in other words, CIW reports are based in statistical analysis (data is, in part, taken from Statistics Canada and the CIBC employment quality index) and pass through a rigorous review process conducted by national and international experts. “If you get the right framework,” explains Slotek, “you create an environment where people can ask the right questions and the right people are at the table making good social policy.”

What indices like the GPI and the CIW do, supporters say, is return complexity to our society. By highlighting the interconnected nature of problems like climate change and health care, they remind us there are no silver bullets. Happiness indexes also transcend partisanship since they require broad agreement on goals—less crime, cleaner air—that call for multi-pronged approaches across various governments and departments. The Canada Well-Being Measuring Act, an early variant of the CIW, was co-authored by Liberal MP Joe Jordan and Green Party member Peter Bevan-Baker. (“We have to distinguish expenditures that truly benefit society,” said Jordan at the time, “from those that signal trouble.”) Introduced in 2001, it passed with most of the House’s support but was forgotten in the following election.

The CIW could transform not only how policy is made, but also the public’s sense of ownership over the issues. Slotek feels that by educating Canadians on what really makes their lives better, the CIW can give them what they’ve rarely had before: a vocabulary to shift political discourse. “Talk to anybody on the street,” Slotek told the Toronto Sun. “I guarantee you’ll get people to say, ‘it’s not just about the money in my pocket; it’s about the health of myself and my family, my community and where I live.’”

With the final reports due in 2010, the CIW has already garnered international interest from Israel, Australia and New Zealand. Romanow believes that getting serious about happiness could be “a great area for Canada to demonstrate global leadership.” The Greens, however, were the only party to include the CIW in their 2008 election platform. And although Nova Scotia’s NDP government has promised to use the GPI, Colman is still waiting for their call. He hopes it comes soon. “Either there is a major shift in direction in the coming ten years,” Colman says, “or in many ways it will be too late.”