As uprisings make their way through the Middle East and North Africa, another group of angry young men and women in the region have started throwing rocks at government offices. This time it's in the geographical centre of the area, southern Kurdistan. The government of Iraqi Kurdistan created martyrs last week in the town of Sulaimaniyah, near the Iranian border, after security forces opened fire on protesters, killing two.

The locals in question were accosting a Kurdistan Democratic Party building. This is important. KDP leader and Iraqi Kurdistan Region President Massoud Barzani hails from the legendary fighting Barzani clan but does not command the heart and minds of Sulaimaniyah residents, who generally side with the rival Patriotic Union of Kurdistan, led by current Iraqi president Jalal Talabani, another survivor of the Kurds' long fight against centralised rule and Saddam Hussein. This struggle resulted in the deaths of perhaps 100,000 Kurds in the late 1980s, when Baghdad sought to end its "Kurdish problem" once and for all.

After decades of resisting domination by the capital, Iraqi Kurds, who control three northern provinces along an arc bordering Syria, Turkey and Iran, are now the subjects of two leading parties that operate largely as feudal concerns. Both the KDP and the PUK divide the spoils of autonomy while urging patience to a young, underemployed and increasingly pissed-off populace.

The two parties and their patriarchs go way back, but the KDP's current powerbase is in Erbil, the capital of the autonomous Kurdish region. Sulaimaniyah, on the other hand, has always been the last city in the region to submit to foreign interlopers—of which there have been many in the bloody history of what's now Iraqi Kurdistan.

Iraqi Kurds are no strangers to revolt, and an internal challenger to the two-party system has emerged. The Goran List—goran means "change"—is led by Nawshirwan Mustafa. During a visit to Iraqi Kurdistan several years ago,  I visited the fortified compound overlooking Sulaimaniyah that Mustafa established after breaking with the PUK. He has serious intellectual and guerilla warfare credentials. It was said that in the 1990s Mustafa could set Kirkuk—a contested city on the border of Iraqi Kurdistan and the other Iraq—on fire with a single phone call. Goran fared well in recent elections, attracting a large chunk of the youth vote—the Tea Party with a vastly different purpose and demographic profile.

The other night I received two Facebook messages from a Toronto-based visual artist named Shillan Jabbar explaining that a casualty of last week's fighting in Sulaimaniyah was a teenager named Rezhwan Ali, apparently only in grade eight. Shillan's brother, a noted Iraqi Kurdish writer named Aso Jabbar, has been critical of the Kurdish leadership's relationship with the American military, one that has included talk of basing rights when—if—all is said and done in Iraq to the south.

For this and other crimes, like starting a union for the unemployed, Jabbar was forced to flee Kurdistan with his family. He now accumulates dozens of friends on Facebook each day while awaiting word on whether the United Nations will consider him a refugee, while Shillan tries to bring attention to the Kurdish plight. 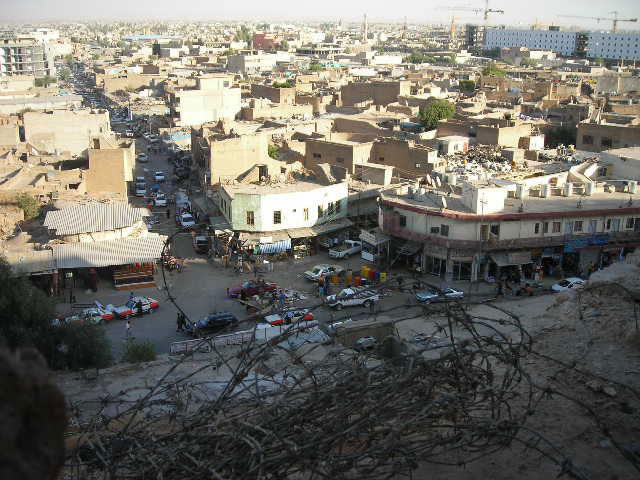 Iraq apparently garners about 1 percent of US media coverage after nearly a decade of war, according to a recent Pew report. Less frequent now are stories of beheadings and roadside bombs; war of all against all has given way to protests for or against a relatively stable government, plus demands for normal things like better state services and—since Iraq hasn't quite been liberated from socialism—government jobs.

Last week, Iraqi Prime Minister Nouri al-Maliki addressed the Sulaimaniyah protests at a press conference in faraway Baghdad. "I am happy to see the Iraqis are able to protest," Mr. Maliki said. "But the protesters should not set fire to a building. We should express our demands in a civilized manner."

In Kurdistan, alongside a great deal of skepticism about Maliki, demand for a whole new politics has grown in recent years. Still, despite Goran's recent challenge to the ruling parties, a lite version of the Syrian model has largely remained: we'll protect you from the wolves, just shut up for now, and if you like democracy so much, move to Iraq.

Kurds learned these lessons all too well during Saddam's time in power. Human Rights Watch issued a report last year detailing how Kurdistan's security forces operate, kidnapping offenders, beating them up and dropping them off in some ditch somewhere. Lawsuits are the cost of doing business for independent papers like Hawlati. This happens in the name of keeping Kurdistan safe from "terrorists" (read: Arabs) from the south, though more often it defends Kurdistan's ruling bargain of government monopolies and outright corruption.

The Kurds have been struggling for freedom for a long time, but public protests against their own Kurdish masters—this from a people with little loyalty, historically, to anyone but their own khans—seems new. "The demonstrations, although over long-festering grievances that neither the American military nor successive Iraqi governments solved, appear to have been inspired by unrest elsewhere in the Middle East," according to the New York Times.

Kurdistan sits on one of the region's ancient pathways, between the Anatolian and Iranian plateaux, north of Mesopotamia, marginal to each. Perhaps as a result, the people of Kurdistan have developed a curious tendency to conflate life in a circulation zone with strategic importance in the eyes of the world's power brokers.

Kurdistan does have oil, though. Let's not forget the oil, largely unexplored and untapped during decades of regional neglect courtesy of Baghdad. While the lack of a hydrocarbons law that Kurds and and Baghdad can agree to currently landlocks about a million barrels a day, the people understandably want to see some revenue pretty soon.

Meanwhile, millions of citizens in Tunisia, Egypt, Bahrain and Libya have been demonstrating against the high cost of "security." You may not hear about the Kurdish fight, however, for the very reason that Iraqi Kurds, by fighting alongside the Americans during the 2003 invasion, have been demanding change all along.

The Kurds won their freedom, and now find it somewhat wanting. The "destabilization" of Iraqi Kurdistan would represent perhaps the ultimate unintended consequence of this era's experiment in regional engineering.