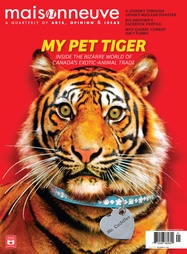 I was born on the banks of the river, enveloped by the smell of kelp. Over the course of my life, I’ve seen an average of one beluga per day. I say this to stress just how Québécoise I am. At night, I dream of our daytime TV shows, and of our dear, provincial star système. But all my life, something’s escaped me: I don’t get what Quebecers are laughing at. Worse, I feel like we’re laughing in counterpoint. Maybe Quebec’s just laughing at me.

The first sign of my condition appeared early on, when I was a kid. A famous, late-eighties Saturday-night hit, Samedi de rire. Yvon Deschamps, an upright chair, a mouth organ. Deschamps’ character Ti-Blanc Lebrun—that classic raconteur—gulped down his harmonica at the end of his monologue, like he always did, and the sound of the trapped harmonica emanated from his ribcage with every breath. I thought that my father would swallow my mother whole with his bellows. I knew everyone in Quebec was busting a gut at the exact same time. Jovial kid that I was, I couldn’t understand how this was funny. Still can’t, for that matter.

Ginette Reno’s song “Remixer ma vie”—now that was funny. Céline Dion playing an abused child in Des fleurs sur la neige—hilarious. Lou Diamond Phillips’ hair in La Bamba—kickass. But how could there be an audience for a harmonica jammed down a larynx? I couldn’t figure it out.

Then there was the sketch show Rira bien, which, for better or worse, didn’t make me laugh either. Neither did Michel Courtemanche, or Daniel Lemire’s character Oncle Georges, or Marc Favreau’s character Sol. I understood pretty quickly that I’d never have to come running when Quebec hollered from the other room, “Marie, you’ve got to see this—it’s so funny!” I usually wouldn’t agree.

My situation only worsened over time. At the height of my adolescence, I was dragged to see Broue, a famous play set in a tavern, “because it’s part of our heritage.” Teen angst kept me from expressing emotions in public, so I didn’t cry with shame the way I should’ve. But on the inside I bled tears—beer-soaked tears—while Quebec (proudly represented here by the audience at Chicoutimi’s Dufour Auditorium), was bent over laughing at chewed-up dad jokes from 1979. Meanwhile, I snickered imagining just how a genius like Francine Ruel was roped into being a scriptwriter for the play. And I still wonder, actually, why, of all Ruel’s oeuvre, it’s not the literary festival Les Correspondances d’Eastman or her Radio-Canada talk show L’été…c’est péché that have made Quebec laugh for thirty-two years. L’été…c’est péché was hilarious.

Later, in the comfort of our Sunday nights at home, I looked on as Quebec got its jollies watching L’Heure JMP. I strongly suspected that everyone was just laughing from sheer exhaustion. Why else would Quebec so docilely flash its lights off and on at Jean-Marc Parent’s bidding? L’Heure JMP was big, and yeah, it was live, and sure, it was musically confusing, but funny? Nope. But while Parent played the disabled guy who kept mixing up how much he loved food with how much he loved ass, I’d keep an eye on the house band. The camera would zoom in on the singer, Alain Couture, who could seamlessly transition from a ditty about a little sailboat to a Led Zeppelin medley in the same high-pitched voice. And, from somewhere beneath his mane of permed hair, he dared to play the flute—at the height of the show’s popularity. This guy was a real contender for a comedy award.

The only time Quebec and I could join hands and chortle was when we watched the sitcom La petite vie together. La petite vie had, without question, the most show-stopping and talented cast on the planet (on par with Annie et ses hommes). But still, I laughed out of a sense of collective obligation much more than out of genuine enjoyment. It could have been so perfect: I saw us, me and Quebec, forever sharing this memory of complicit hilarity, until death did us part. But La petite vie had to have an unforgiveable hook at the end of the series in 2009, a kind of post-orgasm vomit better known as La petite vie: Noël Story.

That’s when an entire army of comedians came and dug the rift that forever separated me from comedic Quebec. I won’t name them. It’s useless, and pretty condescending, to enumerate the comedians you’d like to escort to the guidance counsellor. Anyway, judging by the number of tickets sold and supplementary shows announced for some of them, it seems that Quebec is ready to laugh at just about anything, with anybody, at any cost, so long as it starts with, “Hey everyone, how you doin’ tonight?” Or with an archival video montage assuring us that the comedian in question is really “one of us.” Because Quebec seems to laugh only at jokes it’s already heard, or, at any rate, only seems to appreciate humour when it sees itself in it. Like when you put a baby in front of a mirror, and it laughs when it sees that it exists.

Of course, I’m the real problem. It’s inevitably my problem if what makes me laugh is Greek humour, or playing name-the-actresses-with-smoker-voices. It’s my problem if I prefer bad jokes over dad jokes.* And if comedy duo les Grandes gueules makes me uncomfortable, and if my favourite Québécois comedian is Les invasions barbares star Yves Jacques. I can’t help it. I’m one of those people who think an author like Kim Thuy is funnier than a comedian like Rachid Badouri.

It’s not such a big deal, I know. But sometimes, when I notice the old troupe le Groupe Sanguin is doing a reunion show, I sort of want to protest that we change the record before they ask us to flash our lights on Sunday nights again. Quebec could say “yes” to that.