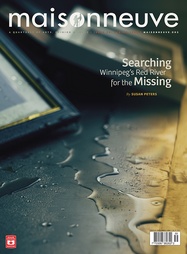 Also in this issue
Also by this author
Tagged comment

LAST NOVEMBER, I invited six friends to my Ottawa home for a dinner party. On the menu was chicken that had been clucking only months earlier. It was then fattened, killed, scalded, gutted, plucked, frozen, thawed, seasoned, cooked and eaten. There was also red wine that, not long ago, thrived as purple, juicy grapes. They were subsequently picked, squished, strained, aged, filtered, bottled, bought, sold, uncorked and drank.

We were all in our early twenties, all healthy, living in the primes of our lives. But when we gathered that night, the discussion was focused on one thing: how we wanted to die.

I WAS TAUGHT THAT DEATH—like sex, religion and politics—is not proper dinner-table conversation. But after reading about events such as Death Cafe and Death Over Dinner, both of which bring people together over food and drinks to talk about mortality and end-of-life choices, I was intrigued, and knew that my friends would open up to the idea as well.

When my guests arrived at 7 pm, we sat on the floor around my living room table, snacking on crackers and cheese, talking about our lives: Mark and Selena mentioned their upcoming wedding; Sarah was uncertain about her career and where her life was headed; Dan talked about a new relationship; Kevin had worked a long day and was asleep on the couch. Normally death wouldn’t be on any of our minds, and it wasn’t an easy topic to broach. So I broke the ice. “Do you believe in reincarnation?” I asked.

We all had answers for how we’d like to be reincarnated: a tree, an eagle, a monkey. But, as it turned out, our choices didn’t much matter; for the most part, we all shared the belief that nothing follows death except oblivion. This is in line with the prevailing beliefs of our generation—an Angus Reid poll in early 2015 found that 44 percent of Canadians between eighteen and thirty-four neither embraced nor rejected religion and 28 percent rejected it completely.

With the religious talk out of the way, we settled into discussing the more important question: how we wanted our own personal deaths to occur. We all have faith in bodily autonomy and quality of life: we were born into a world guaranteeing legal access to safe abortions; we’ve witnessed the legalization of same-sex marriage and the increasing acceptance of trans individuals. We live our lives by the mindset “my body, my choice,” and see no reason why our deaths should be any different.

This year, Canada will reach another legislative crux point in the fight for self-determination. The Supreme Court has required the federal government to amend our constitution to allow physician-assisted dying. These changes were originally scheduled for early February 2016, after a court case one year earlier deemed current laws unconstitutional; the new Liberal government was recently granted a four-month extension to consult with Canadians and study physician-assisted suicide legislation in other jurisdictions before preparing a new law. In the meantime, those looking to die with the help of a doctor can seek approval from the courts. More and more, Canadians are able to dictate, to a small extent, how they leave this world.

IN WESTERN COUNTRIES, mostly safe, mostly free from violence, we typically associate death with illness and age. Mortality for millennials is conceptually different from what it has been for our elders: many of our grandparents survived a brutal war, one that killed friends and family members. Many of our mothers and fathers were raised by these survivors, and they were the ones ducking and covering during the subsequent Cold War, thinking about all the ways to survive a seemingly unavoidable nuclear armageddon. When morticians promised a kind of death that appeared clean and hands-free—one disguised in make-up, expensive suits, limousines, formaldehyde and everything-happens-for-a-reason proverbs—our elders found it appealing. The sanitization of death removed it not just from the home, but from our social dialogue. Death became easy to forget—it was something that would happen someday, but that someday was always in the future. We learned to ignore death until it was suddenly and unavoidably upon us.

As of 2012, 86 percent of Canadians had not heard of advanced-care planning or made plans in the event they become legally incapable of directing their own healthcare wishes. Less than half of those had discussed their wishes with friends or families, and fewer than one in ten had discussed them with a healthcare provider. But discussing end-of-life care isn’t just about the question of autonomy. Sarah Kerr, a death midwife in Calgary, says it’s “an exercise of bringing death into awareness.”

My own desire to confront death came thanks to Kerr, who first introduced me to the concept of the death dinner. Kerr helped facilitate the home death of one of my family members, giving us the chance to be part of the process by communicating our grief through a series of rituals including traditional sage smudging and rattling. Over the past three years, Kerr says she’s seen the conversation around death grow. For her, this shift has been powered by baby boomers, who comprise the vast majority of people seeking her services. “The move to a new cultural pattern around dying is being driven by people who have death in their face,” Kerr says. “Millennials have a lot to offer if they can hopscotch a little bit and not wait until they’re old and grey and their friends are dying.” By talking about death well before it comes, she says, it can become a companion, or a teacher, making life itself more vibrant.

Inviting my friends over for dinner wasn’t just about sharing our wishes with one another. It was a practice run, something to offer us the courage to approach our loved ones not with an “if” but with a “when.” To find this courage, we’d need to embrace our generation’s oh-so-typical urge to share—specifically, to share our fears. Sarah went first. “I think we fear dying. Not death,” she said. Most of us agreed: we feared the pain and the unknown that follows. We feared the grief we would inflict on our families. We feared dying young and missing out on our potential. But then the conversation started to shift, and we spoke of what we wanted out of our deaths and the decisions we would like to make before that final moment came. We all wanted to leave some kind of legacy beyond an abandoned Facebook profile. We talked about donating our organs, from our hearts to our skin to our eyes; some mentioned forgoing a traditional burial or cremation for something greener, like Dan, who said he wanted to be buried under a tree, not a tombstone—something living that would provide for future generations.

By 2031, all of the baby boomers will have crossed into seniorhood and Canada will have had fifteen years of experience legislating doctor-assisted dying. That’s fifteen years to work out the kinks and close loopholes; to learn from what is and isn’t working in other jurisdictions; to recognize abuses in the system and learn how to avoid them. This choice—the ability to select the when and where of our inevitable end—is one that wasn’t readily available to generations past. To take advantage of this new autonomy, we all need to embrace the simultaneous discomfort and luxury of talking about our preferences with our loved ones.

ONCE OUR CHICKEN DINNER was reduced to scraps of bones and skin, it swam in a large pot, accompanied by carrots, celery, onions and herbs. The meal we’d eaten was no more, but it would soon become broth, used to flavour new rices and soups. The wine bottles, now empty, would be taken away and repurposed too, maybe turning into fibreglass insulation or garden mulch.

As the party wound down, Amanda had her coat on, ready to jump into a waiting car. “I had reservations about coming tonight,” she told us. She was worried everyone was more prepared to talk about death than she was, that she hadn’t thought about it enough. But, she said, our conversation had left her “enlightened.” In fact, she thought about going home to her boyfriend and asking him what he wanted when he died, just in case she needed to know. They were a millennial couple after all—a millennial couple who would, as death midwife Kerr hopes, confront their ends before they are old and grey and have no time left to say anything other than “goodbye.”