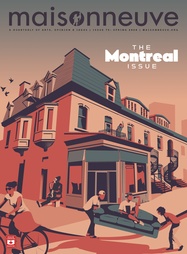 First you lay the strips of spencer steak on the grill. On top, circles of pepperoni. Next comes shredded mozzarella, which melts and holds the whole mess together. Slide the long metal spatula underneath and place it on a toasted sub bun. With onions and piments forts, the “Sousmarin Jimmy Style” was named for the previous owner of the place that became Dépanneur Le Pick-Up.

The grill predated everything. Before the tropical sunset wallpaper. Before the jam-preserving workshops and the zine rack. Before craft beer and art installations. Before the tech takeover of Mile End pushed the freaks farther north. Way before the words “Mile-Ex” had ever been spoken. When Montreal art punks Bernie and ­Penny bought the little wood-panelled casse-croûte-slash-dépanneur in the summer of 2008 and I became their first employee, there was the grill and the Jimmy Style sub. Jimmy still lived upstairs and came down for coffee and smokes every day.

The burgers and subs of the original menu sizzled while clumps of fashionable pulled pork hissed and trendy haloumi tanned. Jimmy hadn’t run the grill much during the previous few years, and now that it was back on, the locals were returning. A big part of the business was running deliveries to meatpackers and auto detailing shops. Alongside them were artists, queers, punks and assorted weirdos—our friends. Things melted together: cheese, meat, bun; past, present, future.

This neighbourhood between Little Italy, Mile End and Parc-Ex had always had an ill-defined quality: a ­tangle of mixed-used zoning, homes interspersed with garages, warehouses and textiles factories. But it was far from a time capsule. By the early 2000s, posh architect-­designed duplexes, art galleries and the ­offices of fashion brands and book publishers were there, as well as the aggressive condoization and gentrification felt across Montreal.

Le Pick-Up emerged from Jimmy’s dep just as, in the 1980s, Jimmy’s Greek immigrant father had transformed it from the original casse-croûte, Chez Maurice. Chez Maurice had been started in the 1960s on the corner of Alexandra and Waverly to serve local factory workers. The ways that the neighbourhood would continue to change were only dimly apparent to us at the time.

Four days a week that first summer, I closed alone. When the Player’s cigarettes clock above the door read 6:15 I turned the grill’s heat dial to max, letting the day’s gunk sizzle.

Around the same time, Dougie would come in through the open door. His silver hair was pomaded, his face lined. He lived across the street and was in a few times every day, looking for matches or two litres of cola or something to do. He would sit at the counter and tell me jokes as I poured his after-supper mug of drip coffee.

Jean would arrive next, his beat-up truck carrying an electric radiator or a pile of old pipes. The two would leave an empty stool between them, dissecting the Habs’ prospects for the coming season in joual. They didn’t seem to mind the waft of greasy steam as I began my assault on the grill with soapy water.

Every few minutes someone would come through the door. A young woman in a neon band t-shirt playing a show that night at Il Motore up the street, looking for a snack. A black-clad bike messenger grabbing a beer from the glass-door fridge. The quiet woman from the single-resident-occupancy building down the block who paid for a can of tuna with a handful of change. Or the elderly Italian regular in a blazer and trilby who yelled “uovo !” as he walked toward the eggs. Our Haitian neighbour from two doors down bought cigarettes and food for his cat, who waited for him in her tuxedo on the dep’s front step before following him home.

In between, I scraped and cursed. Finally, I turned the grill dial all the way down to zero. The grill, and the people, is what I remember most about my two years there. I loved being part of the neighbourhood—ringing up people’s essentials, trading our feelings on the weather.

The foodie media and New York Times attention eventually brought a different lunch crowd, and Le Pick-Up was a vector for a “new” neighbourhood some started calling Mile-Ex. As tech now tries to swallow the area whole, the undefinable neighbourhood I knew is threatened, and it’s hard to imagine what it will be like in ­another twelve years.

But for now, the flattop grill remains—not as a memorial, but as a point of continuity in a city recklessly selling itself to the highest bidder.