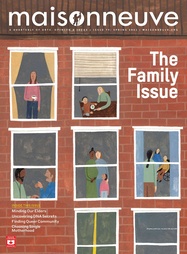 Also in this issue
Tagged poetry

The man whose apartment mine looks into has two daughters

in, I’d guess, their early teens. He works from home, on two computer screens

that face me, a changing lineup of street maps and aerial photos.

At first I mistook the daughters for young employees, one of them,

the first time I saw them arrive, grasping his shoulders while he sat

at the desk, the other flouncing onto the sofa, the silhouette

of her legs over its arm. And I wondered what kind of operation

he was running over there. But then something subtle

in their manner, collectively, set me straight.

He always has to work a little longer after

they arrive home and sometimes I’ll catch him doing even

My own desk is also the kitchen table and after several

iterations I’ve settled upon a jaunty angle right in

between, steering the ship of the living room

from my spot in the bridge. But I’m no good past five.

there on the coffee table is too great as soon as the sun goes down.

Or sometimes you’re here. You begin each week determined

to get it right. To go straight home,

and you’ll surface here with some beer and flop into a chair,

once the day’s sweat has dried. Good day? you ask and I’ll look

at the desk that is now a table and attempt an account of my hours.

The funny remove where there is so little observable movement.

The man is turning off his monitors. The daughters jangling around him,

glasses of juice. Our people here to take us, bring us, home.

Kate Kennedy is a poet, reviewer and book editor. Her poetry has been published in numerous Canadian journals and has twice been selected for the Best Canadian Poetry in English anthology. Originally from Lillooet, BC, she now lives in Victoria.