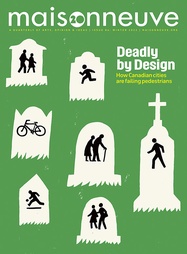 Also in this issue
Tagged letter from montreal

For a brief period when I was a student, I worked in the warehouse of a mid-tier luxury clothing brand. I rode the 55 North along Saint-Laurent to Montreal’s Garment District four days a week to count dusty boxes of shoes, each pair worth more than my bi-weekly paycheque. After each shift, I rode the 55 South to go to class.

The warehouse operated like a small village. Villagers included the shipping department, which sent product to flagship, outlet and retail locations across the country; quality control, which assessed product for damage sustained in storage, in transit, or during production; and the e-commerce division, which collected and sent product to individual consumers. Each package was accompanied by a rectangular placard that read, in curly faux-cursive, Congratulations! Your life is about to get a little bit more fabulous.

In addition to these departments, whose purposes I more-or-less understood, the warehouse contained a seemingly infinite number of opaque subdepartments created through the bureaucratic mitosis of national logistics. Spatially, these departments could be broken down along racial lines. Downstairs, where manual labour happened—moving, lifting, stacking, unwrapping, sewing, steaming, counting, and folding—was the domain of nonwhite employees, predominately Black or Filipino. The majority of white employees worked behind computers upstairs. The position for which I’d been hired was somewhere between an upstairs job and a downstairs job. My official title was inventory clerk.

The inventory department consisted of me and Katie, a small bubbly woman in her early forties who lived in Laval with her preteen son and yappy Maltese. At the beginning of every shift, we were assigned a section of the warehouse. It was our job to count every product in our assigned section to ensure the accuracy of the company’s digital inventory. At the end of every shift, we were to report any discrepancies to our managers upstairs, who would then launch an internal investigation to determine if the day’s discrepancies were the result of misallocation, systems error, or shrinkage. In other words, Katie and I were the village narcs.

Katie used to work with the other Filipino women in quality control, but she had transferred departments a few weeks before I arrived. Some said the transfer was a promotion, earning Katie the disdain of her colleagues along with a modest raise. Others claimed the transfer was a lateral move implemented by management after Katie lodged a complaint against Julie, her long-time coworker and former best friend. Whatever the reason, Katie received an onslaught of whispers, snickers, and the stink eye whenever she walked past quality control, an antagonism only compounded by her new position as warehouse snitch.

Katie and I ate lunch alone, ostracized from the rest of the village. We shouldered a lot of animosity for two superfluous employees with minimum-wage salaries. The company had a litany of safeguards in place to protect against employee theft, including sophisticated surveillance and alarm systems, hard and soft security tags, and mandatory bag checks any time you left the building. Inventory discrepancies were rare and most frequently caused by computer glitches or input mistakes. Only once during my four-month tenure did I come across an item totally unaccounted for: a pair of stilettos gone without a trace. The managers upstairs determined the shoes had likely been stolen, but their investigation yielded no culprit.

How did the warehouse thief do it? How did they evade the security cameras, the alarm systems, the soft tags, the bag checks, me and Katie, and finally, the managers upstairs? Years later, I find myself both impressed and jealous. I never stole a single thing from that job even though my role as inventory clerk put me in the ideal position to cover my tracks. I didn’t restrain my sticky fingers out of some moral compunction. Why buy shoes from a company that won’t even pay you enough to afford them? I restrained myself because I was scared. I needed the job to pay rent, and what if I got caught?

For their cunning and bravery, the warehouse thief will always have my admiration. I like to picture them, whoever they are, standing on the corner of Saint-Laurent and Chabanel Ouest, waiting for the 55 South, a pair of stilettos on their feet and a rectangular placard tucked into their pocket. I hope their life today is as fabulous as promised. ⁂

Cason Sharpe is a writer based in Toronto. His first collection of stories, Our Lady of Perpetual Realness, was published by Metatron Press in 2017.