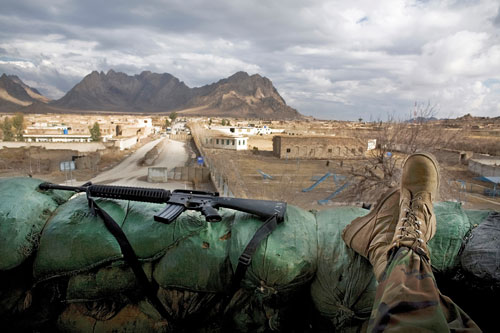 An Afghan National Army soldier keeps a casual watch from inside a guard tower at a Base in the Panjwai District west of Kandahar City. Photograph by Philip Cheung.

The military operation in Libya was first sold as humanitarian intervention from above, but now—inevitably and expectedly—looks more and more like a proper war. CIA operatives are quietly abetting the rebels and, even if the US does not directly arm the opposition to Muammar Gaddafi, France probably will.

The exercise in Libya smacks of the sort of historical amnesia that was supposed to die on the battlefields of Iraq and Afghanistan; you ask yourself, "Who thinks another war is a good idea?" and discover the answer is "NATO." In the Atlantic, Max Fisher argues against selling weapons to the Libyan rebels by pointing out the dark, bloody past of US-backed armed groups: Argentina, Honduras, Chile, Nicaragua, Cambodia. And, of course, Afghanistan. During the Soviet invasion of Afghanistan in the 1980s, the US and other countries funneled tens of millions of dollars to the anti-Russian mujahedeen, many of whom would later become Taliban members. Fisher writes:

In the search to spend that money, a CIA officer wrote in another classified memo, "analytically, the best fighters -- the best organized fighters -- were the fundamentalists." The memo concluded that the best such fundamentalist fighter and target for U.S. funding was one Gulbuddin Hekmatyar, a brutal mujahideen commander who would later join the Taliban, with which he is still battling the U.S.-led coalition in Afghanistan.

Reading this, I immediately thought of a key passage in "We Felt No Mercy," Maisonneuve's current cover story. In "We Felt No Mercy," the accomplished journalist Naheed Mustafa interviews a former mujahed named Neamatullah Arghandabi, turning his own tragic, violent life story into a compelling oral history of Afghanistan. Arghandabi is candid about the brutality he participated in as a mujahed, and offers a telling insight:

We poured acid on women with the burka just because they had come out to do some shopping. I remember we killed people just because they shaved. The Taliban were putting them in a container and beating them, but we killed them. The Taliban didn't let women go to school—we didn't even let them shop. We destroyed more bridges than the Taliban can ever think about. If you came to Kandahar, you knew exactly what we were up to. And now we are so surprised that the Taliban were so extreme and we are so shocked that they could do this. What do you mean, 'How could they do this?' How could we do this? And the world was supporting us.

Nobody can claim that the Libyan and Afghan situations are identical. But the war on Libya has moved forward with such stunning speed that few have had time to consider the lessons of history. As Mustafa writes elsewhere in "We Felt No Mercy":

Afghanistan's last thirty years have spawned a narrative in the West that classifies people as heroes or villains depending on whether they are with us or against us. But heroes become villains become heroes with shifting alliances, and with each change the clock is reset. It was reset again in 2001. The problem, of course, is that when you ignore what came before, you're astonished when it invariably comes back.

—Being Muammar Gaddafi
—Why Afghanistan is Canada's Next Korea
—What Is At Stake in Bahrain?