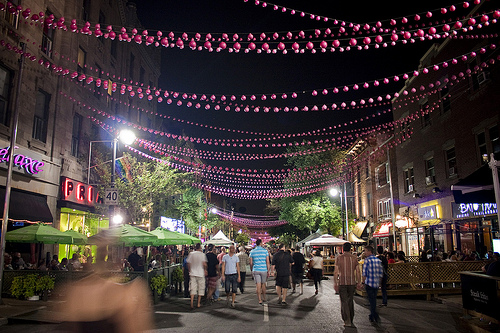 When the stretch of Ste. Catherine Street in Montreal’s Gay Village was pedestrianized for two and a half months in the summer of 2008, it was accompanied by a strange policy that forced the street’s bars and restaurants to serve only Labatt beer products on their outdoor terraces. Merchants were unhappy and for good reason: it was summer-long corporate takeover of public space. (I said as much when a journalist for the Globe and Mail called for my opinion — ah, my glory days as a local pundit.)

Things have mellowed out since then. The Labatt-only policy was scrapped and car-free summers are now a well-loved tradition in the Village. What’s especially remarkable is that, unlike Montreal’s other street fairs and festivals, which ban car traffic for a few days or weeks at a time, the Village pedestrianization lasts the entirety of the summer — day and night, rain and shine. I think it owes a big part of its success to artist Claude Cormier, who draped 200,000 pink baubles over the street in 2011. Les boules roses proved so popular they returned the following year, and they’re poised to make a comeback this year, too.

The pink balls work because they create a sense of enclosure. One of the problems pedestrian streets face, especially in a car-dependent North American society, is that they often feel empty and sapped of vitality. You don’t realize how much space cars take up until they’re gone; a street that seems narrow when it’s filled with traffic, like Ste. Catherine, suddenly feels vast when the asphalt is clear. The baubles counteract that by tricking the mind into thinking the space is smaller and busier than it actually is. Plus they’re fun. And, you know, gay.

—Old Gays
—The Joy of Edmund White
—Gays for God