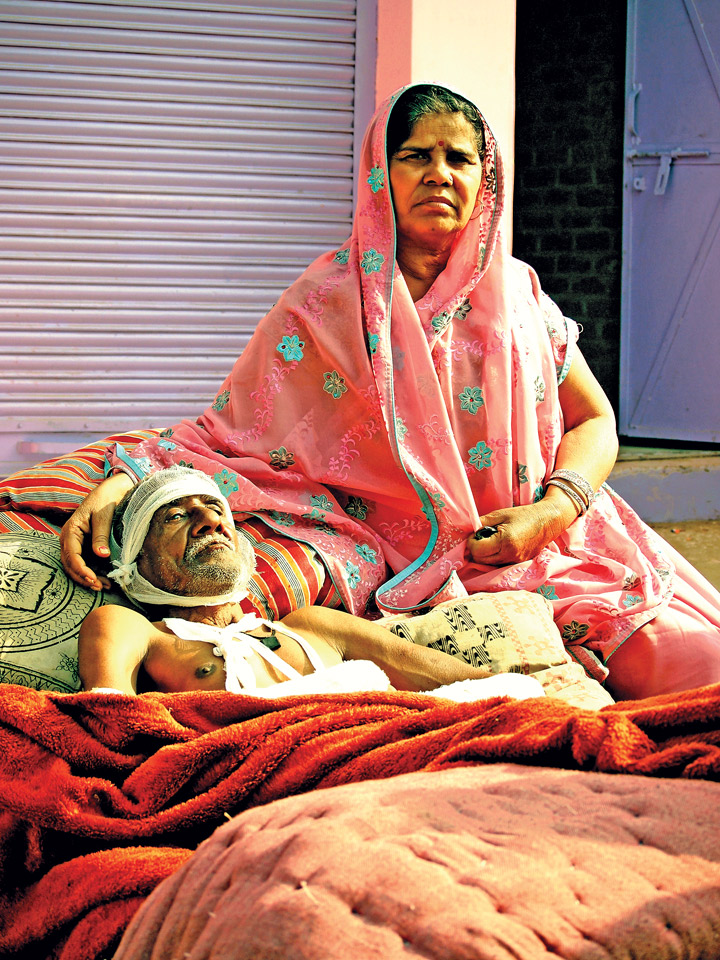 Though it’s usually the first thing people read, the display copy on a magazine story often contains the last words written. These titles and descriptors are the territory of the editors, and traditionally out of the hands of the author of the piece. It’s a fact that often surprises those outside of the industry, and can sometimes cause tension within.

In the most recent issue of Maisonneuve, one of our regular contributors, Deni Y. Béchard, wrote a piece about a group of Indian women who are taking the issue of domestic violence into their own hands. For the piece, he travelled to rural Uttar Pradesh to meet with the activist Gulabi Gang and its leader, Sampat Pal Devi, and to urban shelters housing young street girls. He researched the recent horrifying rape, beating and subsequent death of a young medical intern in Delhi, and the strength of female coalitions in the animal kingdom. It is a comprehensive piece as complex as the issues it addresses, the kind of work that presents a difficult challenge to an editor tasked with summing up its contents in one eye-catching headline.

For this piece's headline, we chose to focus on a unique trademark of the Gulabi Gang, the wooden lathis they carry to beat abusive husbands when negotiation doesn’t produce results. The hed we came up with was “Sticks and Stones.”

When the issue preview went online a few days later, we received an email from Béchard, who  felt the use of a section of a rhyming idiom was flip and disrespectful. “More than being about the Gulabi Gang and their lathis, the article is about women who have suffered sexual violence,” he wrote. “It sounds as if I am making light of the story, calling the issues childish, or, to be very frank, as if I am one of those macho journalists who tells really painful stories with a tongue-in-cheek attitude.” For Béchard, this impression is the exact opposite of the philosophy he brings to his work. He received emails from friends that echoed his reaction, and he requested that we change the hed online.

I was surprised to learn that some people were interpreting the headline in that way. As I wrote to Béchard, I felt that “Far from a tongue-in cheek-attitude, attaching a title like this to a piece with such weight emphasizes, in my mind, the depth and importance of the issue. Especially with something like rape or domestic abuse, which, so often in patriarchal cultures, is trivialized...[The hed] plays to that injustice and emphasizes not only the violence and misogyny captured in the piece but the horrifically dismissive attitude so many take towards it.” We had meant for the phrase to be read in its modern context as a statement of strength. “To me, the hed speaks not only to the lathis, but also to the idea presented by people in the piece that women might use rape to excuse promiscuity, and that the cultural dehumanization of street girls and prostitutes is directly connected to the abuse they suffer. These women are called names, but they remain strong. They have banded together in dire circumstances to create safety and their own form of justice in a world that offers them no protection.” It was clear, however, from both Béchard’s reaction and comments he was receiving from others, that the editorial intention of the hed was not coming across to many readers. In fact, some interpreted it as having the opposite of the intended effect, with the word “stick” conjuring details of the brutal use of a metal pipe to fatally injure the Delhi rape victim.

It wasn’t so long ago that once something was sent to press, that was it—corrections could be issued at a later date, but the printed word was set for posterity. As with so much in our industry, the advent of online content has changed the way display copy works. Many publications rewrite headlines when they post a story on line to optimize the ease with which the piece will appear on search engines. But it’s a long-held journalistic convention that display copy is out of the writer’s hands. So when the request for a new hed came in, I explained our policy to Bechard, as well as the intended effect of the line. As an editor, making this kind of change blurs the lines of best practices. Our staff discussed the issue, and Maisonneuve’s publisher, Jennifer Varkonyi, pointed out that one of the many things that distinguishes our magazine from others is the collaborative way we work with our writers. As Bechard wrote in his email, “I offered [this piece] to Maisonneuve because I knew that I would be able to discuss the intricacies of the issue and not be forced to dumb it down or be reductive.” That writers view Maisonneuve as a home for this type of work is important to us. While changing heds for searchability isn’t something we do right now, it’s something we might conceivably try in the future. All of these factors contributed to our decision in this unique case.

“I do sincerely believe that the title misrepresents the article, that it is offensive in light of what the article is discussing, that it is insensitive to the girls and women who have been raped and abused, and that I should have a say in what you associate with my name,” Béchard wrote to us. While the headline was written with the best intentions, it’s clear that this was one instance where for many, the display copy wasn’t doing the job of communicating the nature of the piece.

The particularly sensitive circumstances surrounding this story, and the serious, considered arguments made by the author have lead to an exceptional outcome: we’ve decided to change the name of the piece online. This post is meant to give insight into the editorial process, as well as spark discussion about the power of words.

—This Is Not Journalism
—The Journalist and the Music Fan
—Female Writers Don't Get Bylines—So What?