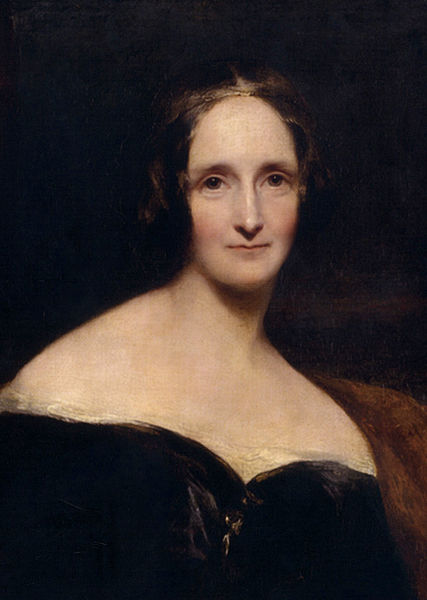 A portrait of Mary Shelley.

Unlike others who have reacted with outrage to your comments about your preferred reading and teaching material—books by white, heterosexual males—I was delighted. I too confess that I have a strong preference for books written by people like me—white, heterosexual females. Haven't got time for the rest.

It means, sadly, that I don't read your books, but I feel we are on the same wavelength. How that is possible I don't know, you and me being so different as human beings. But like you, I wouldn't dream of teaching any work by a writer outside of my realm of experience. Because in literature, what I appreciate most is seeing myself reflected back as closely as possible. And that cannot happen unless the book is written by someone who resembles me in terms of gender, ethnicity and sexual preference. How could I be passionate about anything by a gay person, or a Chinese person, or, oh my god, a man? How could anyone like that write anything that transcended our differences and said something enlightening, to me, about life, the human spirit, literature itself? No. If they don't reference things I know about, as a white, Canadian, heterosexual female, I just tune out. I say, you want a discussion about male writers—down the hall, people!

Wait a minute, though. William Faulkner is a pretty seriously talented male writer. I'll make an exception there. And Michael Ondaatje. I've read him. But in terms of people like me, who also write, I'm far more interested and engaged by the ladies, because, like I said, when I read, what I want is to be able to say—what really turns my crank—is when I go, Yes! That there, what that chick just wrote, that is sooooo like .... me!

It is okay though, because ladies who write—oh wow. Do you mind if I list some here? (Since you don't read them, you may not know of them, and though others would say you're missing out, hey, between you and me: I get it, sir!): Mary Shelley, Jane Austen, Charlotte Bronte, Emily Bronte, George Eliot (she wrote under a guy name so people like you would read her - clever little minx!), Elizabeth Gaskell, Emily Dickinson.

Oh, you know what? This list is going to be long. I'm not even out of the 19th century yet, I won't get to fit them all in here. You can Google them, though. If you have time. I know you're busy with apologies, on your publisher's advice, in order not to harm book sales. (Like I said, I never bought your books anyway, so no worries there. I've saved you an email.)

Of course, the University of Toronto hasn't hired me to share my all-white-hetero-female-all-the-time passion with their mostly female students. What they said, more or less, was: Get thee to a women's studies department. (A guy friend told me that what I just wrote is an allusion to a line in an old play about a guy named Hamlet, by a guy named Shakespeare, whose original line was: Get thee to a nunnery. Apparently in those days, a nunnery was really a whorehouse. Nunnery = whorehouse = women's studies department: get it? I almost didn't, because with my policy of only reading books by people like myself, I have never read Shakespeare.)

I've hesitated to share my thoughts before this, but it's time to come out of the closet. Barbara Gowdy rules. Margaret Atwood and Alice Munro, too (it was mighty white of you to let them into your brain cells for a passing moment, David).

It's a bummer that people misunderstand what people like you and me are saying. But I'm glad the young women in your class have you as a role model for passion. In future, I hope they take your approach to heart, and restrict themselves to the writings of the people most like them. They seriously don't need to bother with any other writers, ever.

They'll go far in life, thinking that way. Maybe even down the hall.

—Female Writers Don't Get Bylines—So What?
—Women Writers on Life After 50
—Writing Her Off