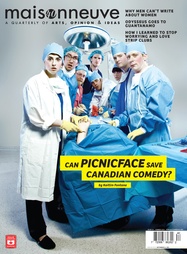 Not long ago, I was reading an article in the New Yorker when it suddenly hit me: a woman must have written this. The piece was a profile of April Bloomfield, a chef who runs a high-profile gastropub in Manhattan. Nothing about the writing style was stereotypically feminine. In fact, the writer made Bloomfield, with her demanding job, sound badass, bulldog-like—the owner of “a compact build and a pugnacious chin.” I might have felt, subconsciously, that I wouldn’t mind being compared to a bulldog. And that’s when I knew. I flipped back to the opening spread, and there it was: a woman’s name, right in the byline. Goddamn.

A few issues later, in the same magazine, I read an article about Nancy Lieberman, a woman who coaches minor-league male basketball players. This is someone who’s leapt over so many barriers that her career reads like a play-by-play of a steeplechase. But the writer just kept describing her hair—and her nails, and her stilettos—as if gettin’ her glam on was the apex of Lieberman’s day. Her work was beside the point. This time, the byline belonged to a man.

A real person can’t fit inside three thousand words, five thousand words, twenty thousand words. Profiled people can be charming, repulsive, possessed of a touching hubris. As frustrating as it is, they must always be reduced—but, too frequently, it’s women who get reduced the most. The smart, self-possessed ladies whose life stories grace the pages of major magazines and newspapers are described with words that contrast their femaleness with their careers; successful yet female, instead of successful and female. (The magazine you’re currently reading is certainly not immune to this tendency.) And the writers most likely to reduce them, more often than not, are male.

In the Walrus, I read a profile of a high-ranking, silver-haired Canadian bureaucrat, and it went like this: a “nice lady” goes into politics, then surprises everyone by getting tough and routing out corruption. She doesn’t back down; who woulda thunk? She was compared more than once to a kindly old teacher, a “schoolmarm.” That nice lady was no less than Sheila Fraser, the auditor general who sniffed out the Liberal sponsorship scandal.

In the New York Times, one writer wondered why profiles of actresses always include descriptions of them eating “with conspicuous relish.” He considered the causes of these “documented instances of public eating.” Could it be because their publicists prefer them chewing instead of answering questions? Because men get off on hot women chowing down? Or because the safest public face is a hungry one—especially when a celebrity is defined by her “bony angularity”? The writer never quite mentioned eating disorders; what could have been a juicy critique of profile conventions was yanked off the grill before it was done.

Men wrote these articles. Maybe the little, womanish details of ladies’ personal lives just seem too exotic, too potent not to include. I can’t believe an older woman could be so tough! These actresses must be troubled! And so the writers focus on the performance of femininity, rather than the accomplishments that made these women notable in the first place.

Male writers are not alone in their bad habits—nor are they monolithic. Men can and do write respectful, considered profiles of women; ladies write about ladies and never move beyond the superficial. I know young women who claim they “aren’t feminists” and men who were born girls. (Any comparison of male and female writers inevitably ignores transgendered people, further complicating the issue.) Still, evidence of the lazy—perhaps unintentional—sexism of many male writers is overwhelming, and it isn’t limited to trashy checkout-line rags. These articles show up regularly in the pages of serious, intellectual publications with liberal mandates and a degree of social conscience.

This boys’-club attitude extends beyond profile writing. Earlier this year, VIDA, an American organization for women in literary arts, released a tally of female and male writers published in major literary and general interest magazines in 2010, titled The Count. Among its many tragic, if unsurprising, findings: women wrote a scant 20 percent of the books reviewed in the aforementioned New Yorker; 16 percent in the New York Review of Books; even down to 14 percent in the New Republic.

VIDA’s ratio of men to women journalists wasn’t much better; predictably, most writers being published in major literary magazines are men. The International Women’s Media Foundation also released an extensive international report this year, which concluded that only a third of the people working in journalism worldwide are women. It’s no wonder profiles impose old-fashioned ideas on their subjects even while, off the page, women continue to make strides.

Of course, the real world—the real workplace—is far from ungendered. We’ve come a long way since 1957, when Christina McCall, then a twenty-two-year-old secretary, published her first feature in Maclean’s. (It was a masterful profile of a female mining authority; she went on to become one of Canada’s most prodigious political writers.) But women in the Western world still have to fight their way into many male-dominated professions. The fact that Nancy Lieberman, the basketball coach featured in the New Yorker, got a gig in men’s sports is laudable. We should never take our opportunities for granted.

The historical burden of womanhood might seem, to an outside observer, an especially heavy one. I suspect that many of the male writers who profile women are in awe of their subjects’ tenacity. Maybe that’s why so many of them get hung up on femininity. They could be enlightened, egalitarian men who love to see women succeed; they might find it inspiring that, as the old chestnut goes, Ginger did everything Fred did, but backwards and in high heels. But this fascination often oversteps its boundaries, turning profile subjects into curiosities, even though the most interesting thing about any person has never been her gender.

The working woman should no longer be a novelty. I recently ran into a gallery owner I know, and she told me that her work had been getting a lot of press lately. For some reason (she said, a little exasperated), even though journalists come to interview her about the gallery, everyone just wants to talk about her baby. Why does it matter that I have a baby? she asked. A lot of people have kids. I agreed, and we nodded. Neither of us stated the obvious: because you’re a woman.

Writing a good profile requires hours spent with a subject, and still more hours distilling her life into a tidy package. Deadlines are awful, word limits even worse. With so much information to parse through, it is tempting to fall back on types and assumptions. But life stories are powerful: intimate written portraits have moved me to tears. To squander your word count on a rehashed stereotype is a crime against your own ability, your own empathy and understanding.

Lauren Collins, who wrote the profile of chef April Bloomfield, described her subject not as a woman in a man’s world, but as a human—a talented human with a tough job. Collins did not paint her as a “female chef,” and the account of Bloomfield’s professional life was all the stronger for it. It was about her specifically, not the idea of her or the idea of female chefs.

No thorough magazine profile would ignore gender—a person’s life experience is inextricably tied to it, for better or worse. Many successful women have harrowing stories about how sexism has hampered their careers. There’s no reason journalists of any gender should pretend not to notice a subject’s hairstyle, young children or distaste for makeup. The problem starts when they get snagged on these details, stuck to their subjects’ femaleness like bubble gum in long hair. It’s time we cut those writers loose.