The Cowan brothers at Arbutus Records. Photographs by Patrick Alonso.

Head to the scarred industrial zones of any major city and you'll find them—modern speakeasies with no passwords but plenty of cultural cachet. These loft spaces operate as concert venues, makeshift dance clubs and galleries. They spurn traditional promotion and shy away from the media. Are they awesome? Of course. Legal? Not always. In Montreal, where rent is cheap and no one seems to have a grown-up job, they spring up and disappear in the blink of an eye, with names alternately oblique (Friendship Cove, the Electric Tractor, the Torn Curtain) and literal (la Brique, the Decadent Squalor, the Silver Door). The best part: if you don't like the shows or the parties or the people at these places, you can always start your own. Here's how.

1. Work your ass off

Naomi Cook never meant to start a gallery. In 2005, as a young artist with no studio space, she was scrounging for free materials in Montreal's Mile End neighbourhood. She found, instead, an abandoned building with a whole lot of potential. "I brought my brother, Konan, back and the place was beautiful," she remembers, waving a hand at its exposed brick walls and wood-beamed ceilings. "We walked in the place where the gallery is now—which is definitely the most beautiful room in the whole place—and we were looking at it and we thought, 'Let's just take the whole floor.'"

Sometimes a place calls out to you. In this case, though, that call was a little muffled by the junk that filled the building from bottom to top. The former owner, an obsessive hoarder, collected—and left behind—everything from butter churners to an old Mercedes. The space had been a garment factory in a past life. There was no electricity.

"The wiring we brought somebody in for, because we're not willing to take that risk," says Cook, "but for everything else-well, my brother had some experience in construction. I didn't know what I was doing at all." Five years, multiple fundraisers and untold hours of backbreaking work later, Naomi is the proud proprietor of Red Bird Studios. The loft now contains workplaces for thirty artists and an enviable vaulted gallery.

Red Bird started small. For the first three years the Cooks rented it out as studio space, and only started the gallery when, Naomi says, she was "ready to take the next step." Lab Synthèse, on the other hand, began rather more ambitiously: with a manifesto. The now-defunct venue was the brainchild of another sibling team, Alex and Sebastian Cowan, and a far-flung band of friends with lofty ideas—in more ways than one. They corresponded via email for over a year, hatching a plan for a Montreal art collective. Alex remembers discussing "destroying to create, diversion that isn't just mindless entertainment, and making people come into contact with things they were uncomfortable with." Sebastian moved back to Canada from London. One friend moved up from Mexico City. Their first show at the resulting loft space, located just north of Mile End, featured "a bunch of people on stage with masks on, chanting."

It soon became clear that such avant-garde hijinks weren't going to fly. The Mile End dwellers who flocked across the train tracks to Lab Synthèse wanted interaction, not confrontation; while only a handful showed up to watch experimental theatre, a classic Halloween party drew the revellers in hordes.

"We ended up moving away from the more ideological side of things and just started hosting shows and parties," Alex says. "It was a healthier thing in the end to create a community space, rather than focusing on lofty and esoteric ideals." 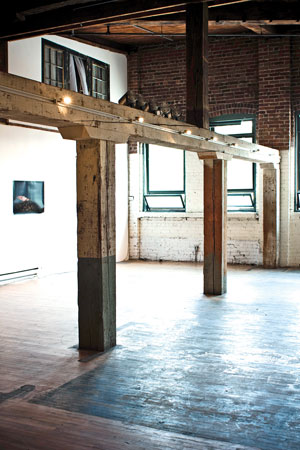 A DIY space seems like the ultimate teen fantasy: no parents, no cops, no bouncers! But just because you can bring your own booze doesn't mean you can tear the building apart. "If you're not a formed institution—and I do consider the Red Bird to be in some ways—people kind of have this attitude that they can take advantage of the anarchy," says Naomi Cook. An artist tenant once tried to steal her building's outdoor drains and sell them for scrap.

And for those who call their lofts home, ground rules are especially necessary. The Cowans lived and made art at Lab Synthèse, but, to others, it was just another place to get drunk. "There's a certain degree of respect when you enter someone's home that you don't enact in a public space," Alex says. "I would come home and just want to relax but tons of people would show up and be like, party time!"

The overlap between public and private made living at Lab "feel a lot like work," Sebastian admits. "If I could have chosen to take it easy and not be concerned about broken glass or spilled beer, that probably would have made me happier, but that's just who I am." Most concertgoers get to head home after a show and prepare for tomorrow's hangover. Running a loft venue, however, is like hosting a house party several times a week, complete with piles of empties, complaints from neighbours and constant sleep deprivation. Without some rules, burnout is inevitable. 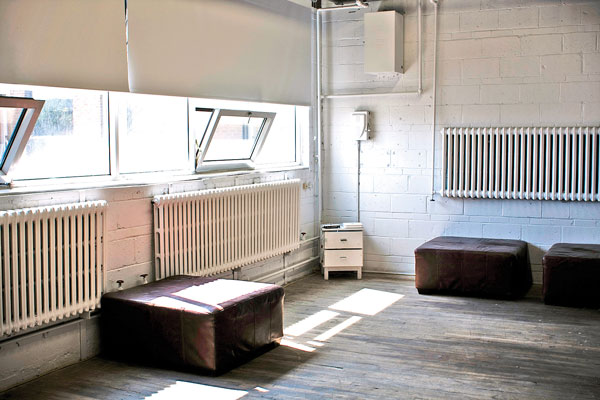 Eastern Bloc is a space in transition. Gone are the squalid bathroom and peeling paint, replaced with a neat row of stalls and fresh white walls. A line of white Macs shares open-concept office space with a child's playpen, all bathed in natural light from massive windows. Pretty slick for a space that artistic director Eliane Ellbogen says was once "in a state of total decrepitud—almost a slum." When she and Bloc co-founder Sandor Pölöskei discovered the space, it was much like Red Bird's earliest incarnation: more cavernous than airy, an enormous former textile factory with few proper walls and piles of abandoned junk.

"We've kind of been renovating since day one," explains Ellbogen. "It's been a very steady ongoing process of getting the space to a level where it feels more professional than underground. We kind of ride that line."

Raucous underground parties may just be a thing of the past for the Bloc. At only three years old, the Little Italy venue is acting like a grown-up. The space is now a self-proclaimed haven for new media and interdisciplinary art—one that Ellbogen says the local community is starting to recognize as a "legitimate art venue." Eastern Bloc is so professional, in fact, that Ellbogen recently went on paid maternity leave.

"I think a lot of the people who used to come to Eastern Bloc a couple years ago are maybe thinking, 'What is this? I don't recognize this aesthetic. It doesn't make sense that this is happening at Eastern Bloc,'" Ellbogen admits. Their original goal was to create an underground space that could play host to parties and live music. But that got old fast, and rather than shut down, Eastern Bloc decided to go upscale.

"We also didn't want to be inviting the police into our backyard—and for what, really?" Ellbogen asks, raising an eyebrow. "Just for the glory of having people party in your space all night?"

5. Don't expect the fun to last

The door could have led to a broom closet. Painted the same colour as the surrounding wall, a lock on its knob, and perfectly
inconspicuous—exactly as the founders of Lab Synthèse had intended. "It was definitely not emphasized that we were living there," says Alex Cowan. "I think it was first and foremost a performative place and not a residential one."

Most industrial spaces aren't zoned for residences; neither are they zoned for commercial uses, like, say, putting on concerts. The road to rezoning is an arduous march through a bureaucratic swamp, and there's no guarantee of success. "You're spending more time doing paperwork than anything else, and I don't think anyone with the dream of running a loft venue wants to do that," says Sebastian Cowan. Once you dive into the permit process, don't expect to make it out anytime soon. Part of the game, says Sebastian, is accepting that a loft venue "is not a sustainable project."

The crowds at Lab Synthèse grew to include people outside the Cowans' social circle and a sprinkling of undercover police. The latter shut down the venue's unlicensed bar, without which, Sebastian says, running a venue is "almost like charity work." After two years, police attention and their landlord's distress pressured Lab's residents out of the space. They weren't evicted, Alex emphasizes—they were just too exposed.

The Cowans have since moved on, cofounding the independent music label Arbutus Records and performing in local bands. Musicians who played their earliest gigs at Lab are now releasing their first records on Arbutus—call it Lab Synthèse 2.0. "We figured it wasn't worth our time," Alex says of his erstwhile loft. "We didn't want to run a venue for the rest of our lives."