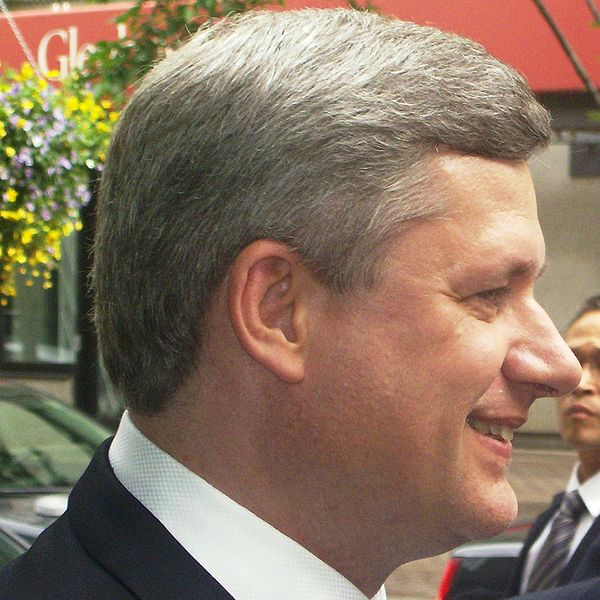 A wolfish Stephen Harper in Calgary. Photo by Jean Gagnon.

Ron Graham has an essay about Stephen Harper in the 10th anniversary issue of The Walrus, in which he argues that for all of Harper’s electoral success, he hasn’t shifted Canadian politics as far to the right as he once dreamed of doing.

It’s worth reading, mostly for its withering but accurate analysis of Harper’s personality. (Sample: Harper looks like a “satiated badger.” The story isn’t online, so buy a print copy!)

Graham argues that Harper is Canada’s first suburban Prime Minister, both in the sense that suburbia weaned him—he’s from the white-bread western fringe of Toronto—and because he represents the insular, anxious worldview of commuter-folk.

It’s a portrait that put me in mind of another leader whose political and personal style have been examined recently, albeit one who isn’t alive anymore: Richard Nixon.

In Our Nixon, a new documentary based on “home videos” made by his staff, the disgraced former President comes across, in temperament and politics, much like Harper.

So many things about the two leaders are alike: their obsession with political strategy, their secretiveness, their carefully cultivated “square” personas, their disdain for old-money polish, their pragmatism on big things like the economy and foreign affairs, and their carefully considered arch-conservatism on wedge cultural issues like crime.

In one scene in the Nixon documentary, the President presides over an event featuring some hokey country band, and tells the audience, “If the music’s square, that’s because I like it square.”

It reminded me of a moment described in Mark Kennedy’s recent biographical series on Harper, in which the PM tells reporters that on election night in 2011, when it became clear that his government had won a majority, he tried swigging from a bottle of champagne only to find his staff had deliberately emptied it of all but the dregs.

“So much for my wild side,” he reportedly said. “That’s as wild as it got.”

Nixon was, and Harper is, culturally conservative—though both men presided over eras of radical liberalization in sexual mores.

Neither man was a doctrinaire right-winger, though: in 1971, Nixon imposed price and wage controls, a move still resented by libertarians, while the Harper government came through with Keynesian stimulus during the worst of the 2009 recession.

Nixon and Harper even bear a certain resemblance: they’re both easy to caricature as wolves. Those icy, squinted eyes. Those long noses and sly mouths.

There are major differences between the two leaders, of course: there is no evidence that Harper ordered the cover up of any attempted burglaries, for one thing.

But in style and substance, Harper and Nixon are uncannily similar.