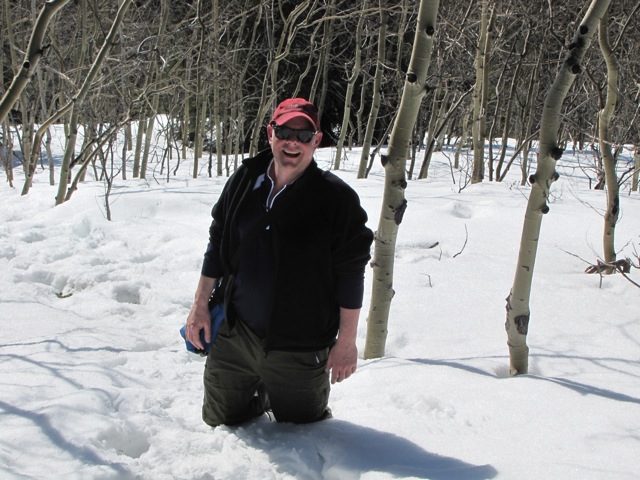 Writing stories with a personal narrative is nothing new for Toronto author Tim Falconer. Take, for example, "Face the Music", his 2012 Maisonneuve piece about his own tone deafness that he is currently expanding into a book. But for our 50th issue, he tackled something that is perhaps more difficult than writing what you know: writing what you love. Here, he discusses the challenge of covering one of his favourite places and capturing Canada's North in "Klondike Creative Class," his piece on the arts scene in Dawson City, Yukon.

Haley Cullingham: You have a very close connection to Dawson City, so that made for an interesting dynamic both when you were the writing the piece and when you began to work with me on edits.

Tim Falconer: That was really hard for me, because obviously I’m writing about a place I love, but I still want it to be a good story. And so it can’t be a total puff piece, I want it to have some tension.

HC: You said that people warned you about that. “Don’t get caught up in the myth.”

HC: That ties into your metaphor of Dawson City-as-high school really well, this mythology based on a certain level of support that might not work as a model.

TF: Yeah. And a more cynical writer might have played that up more, whereas I mention it but I don’t go on and on and on about it.

HC: Another direction you could have taken this in would be to write a much more nostalgic memoir-style piece. There are those elements, where you’re talking about being up on stage, and I can see why it might be tempting to write a travel piece about “My strange time in this strange place.” Why did you end up writing the story as a feature?

TF: I never really thought about writing it any other way. I don’t think it would have been as interesting. I don’t think I’m as interesting as the people in that town. I told it in the first person and I used some of my own experiences for sure. One of the things you said about the first draft was that in parts, it was like the reader’s sitting next to you hearing you tell the story. I wanted a bit of that, but I didn’t want to go overboard. Talking in the second person in places, I was trying to get at that. But it’s interesting you say “more like a travel piece,” because if you look at the definition for travel for, say, the National Magazine Awards, it’s about a place. I don’t like most travel writing, I rarely read it, maybe because it’s all about, “I went here, look at the beautiful bougainvillea,” which is not my kind of writing. I guess you didn’t want me to go in that direction because you never said, “Why don’t you make this more memoir-y?” I just don’t think it would have been as interesting. I’ve written a couple of things about my first summer in the Yukon, in ’79, and that was totally memoir, because you’re writing thirty-odd years later. With Dawson, it was, “Wait a minute. Every story I read about Dawson is about party-town.” And that’s not what I found fascinating about the place.

HC: One thing that people often bring up when they write from the North or edit from the North is the way the Southern media talks about the region. Whether people are only writing negative things despite the positive things happening, or the opposite, it seems that, for those who live or have lived there, there's this myth-busting desire to try to change the way that conversation is framed.

TF: I think coverage of the North is always about the problems, or these completely romanticized pieces about the North. And I totally get the latter because, for a Southern Canadian, the North holds so much mythic quality and then you go up there and you find out why. It’s hard not to get sucked into the mythology. I don’t know how successful I was. What I did was I tried to tackle the mythology straight on and then not so much debunk it as try to look at it in a clear-eyed way, because I think without acknowledging the problem of the mythology, you’d have a lot more trouble trying to make the piece work.

HC: But the idea of Robert Service, the mythology, has made Dawson possible. The idea of artists continuing that is probably a good thing, right?

TF: I say in the story that it hasn’t remade the economy, but I think it certainly gives the town more reasons to exist. We’ll see what happens in the future, government money could dry up, but they always say nothing succeeds like success. So you now have all these artists-in-residence, writers-in-residence, musicians at the music festival, who go, and they tell other people. It’s just spreading and spreading and spreading. Berton House isn’t open to international writers, but the KIAC residency is open internationally, and people internationally are now applying. And I think it’s becoming harder and harder to get into it. And that’s a good thing. And you know what? Artists go there, and, not all of them, maybe only a small percentage, but some of them, move there. And the school, of course, has really changed the town. So unless funding for artists really dries up, I think it bodes well for them. But it’s still hard for an artist to make a living in the South, it’s no easier in the North.

TF: Yeah, rents are expensive, and it’s hard to find housing, and that’s a real problem. And food’s really expensive. But a woman I interviewed, she lived a few years up there, and she said it’s actually a really cheap place to live, because you never have to buy new clothes. If you go out to the bars it’s expensive, but if you live a moderate lifestyle, she said in a couple of years up there, she paid off her debts and put money in the bank. You don’t need a car, you don’t need fancy clothes, you aren’t buying tons of stuff. Yes, food’s expensive. Yes, internet’s expensive, but there’s so much more making your own fun. But I think for an artist looking for a cheap place to live, maybe look closely at Dawson and see. Or, you end up living in West Dawson off the grid. Which is cheaper, because you’re off the grid.

HC: You’ve said that you would move to Dawson in a heartbeat and you have a really strong connection to the place. Did writing this story change that connection?

TF: I think it was really good to get it out of my system, the writing. Not that I like the place any less, but it became easier not to obsess about it anymore, to have written it. I guess people who write memoirs would call it catharsis. I tend to write about myself as a narrative device, I'm not writing about myself to exorcize demons, to unburden myself. I think it was probably healthy for me to write it, I don’t know. [laughs] But also, I wanted to write it because I thought it was a story that should be told, that people should know about this place. Certainly people who know me know that I love the Yukon. Maybe this will help them understand why, but I’m hoping more than just my friends read the piece. I’m sure you are too.

HC: One last question, and something that’s come up a lot this year for us is, obviously, the money thing. People are asking if it’s sustainable to make a career out of writing long form journalism. You wrote this piece with the help of a grant. Do you think that we’ve now reached a point where stories like this are endangered because of the financial reality of the industry?

TF: Yeah, absolutely. This was a labour of love. I probably lost money on this. But I really wanted to do it. In all honesty, I wanted to go back to Dawson. But that’s a real problem. Because there isn’t some great issue, or some story with amazing tension, not even a big magazine is going to send someone to Dawson City. So I think this is the only way it could be done; either someone who was there, (and I’m glad I didn’t try to write it while I was there, I’m glad I went back), and so either you have someone who is there and just so caught up that the story doesn’t really work, or you get someone willing to lose a ton of money on it. I certainly spent a lot of time on the story. On the other hand, like you say, that’s the way the industry is now. I am at the stage in my career where I can make money doing some things and I’ll do other things because I want to do them. I think you can get into a trap of, “Well, I’ll only work for a dollar a word.” And then you end up not doing stories that you really want to do. I wanted to tell this story. And if it meant that I needed to get a grant to pay for the travel, then fine. I couldn’t do that for every story I do. It’s a real shame that we’re at a stage where there’s more and more hunger for and appreciation of long form, narrative journalism, longer pieces, but it’s harder and harder to get paid for it. I don’t have the solution. Unless we can find a way to get the readers to pay for it. But I’m just as guilty of seeing things on the web, or on Twitter, and saving it to Pocket and reading it on Pocket and not buying the magazine. That’s a really depressing way to end.

HC: Okay, I have one more. Another thing that was interesting about this piece for you, I assume, is that you have this personal connection to Dawson, you have those special places, those special experiences, and doing something like this, you’re inviting other people into that experience. You’re inviting the photographer, Sarah Fuller, you’re inviting our art director, Anna Minzhulina, myself as the editor, the fact checker, Shannon Tien, to interpret the place. Suddenly it’s all these people invading this place. I was wondering if that was a weird experience.

TF: I hadn’t really thought of it that way, but I have no problem with exposing it. When Anna read it, she emailed me and said “I love the piece, I love places like that, I really want to go there.” I hope people read it and say, “I really want to go there.” Because I think every Canadian should experience the North. And Dawson’s a great place to do it, but there are a lot of great places in the North. But it’s not like I wrote about my secret favourite restaurant and I’m worried I won’t be able to get a table anymore. Dawson’s a long way away. From Toronto it’s two days travel and a lot of money. So I’m happy to spread the gospel. This article isn’t going to lead to a bunch of pilgrims taking over the town. That would be ascribing far too much power to my writing.

—Face the Music
—Interview with Jessica Westhead
—Our Winter 2013 Issue