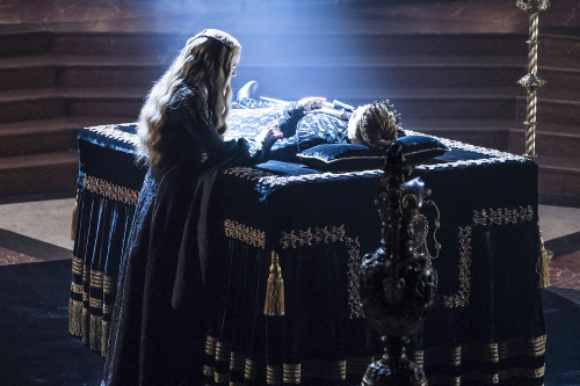 Game of Thrones fans generally have a high tolerance for the grotesque. The show has more than its fair share of strange and gruesome violence—it’s difficult to think of another primetime hit in which a wolf’s head is sewn onto the body of a brutally slain hero, for instance.

In many ways the show is toned down from its source material, a series of novels by George R. R. Martin. Martin excels at detailing the intricacies of medieval societies, but frequently writes with the restraint and maturity of a twelve-year-old who has recently discovered the Marquis de Sade. Despite its reputation for gratuitous nudity, the show has excluded some of Martin’s most indefensibly self-indulgent elements and has significantly humanized many of the book’s one-dimensional female characters. So it’s something of a surprise that a scene that recently angered many fans and critics didn’t come from the books—it was an embellishment on the part of the show. And it's an embellishment that the show’s producers probably regret.

The scene as it appeared in the book (excerpted in this spot-on piece by The AV Club) was not one that obviously called out for additional depravity: it involved Jaime and Cersei Lannister, brother and sister, having rough sex on a religious altar mere feet away from the corpse of their recently murdered son. For reasons unknown, the show's producers decided that rather than being an unappealing-but-consensual sex scene, it should instead be a rape scene. The two characters kiss, but when Cersei pulls away from Jaime, he calls her a “hateful woman” and angrily forces her to the ground, despite her asking him to stop. She kisses him back at one point, but stops, repeatedly pushing him away and pleading that it’s not right. “I don’t care,” he says forcefully, beginning to thrust while foreboding music plays in the background.

To play the scene in this way is a puzzling choice, to say the least. It makes little sense in terms of the characters’ motivations—Jaime had been heading towards a redemptive arc, while the book version of Cersei becomes even more cruel and manipulative after her son’s death. While still a villain on the show, she is frequently granted moments of humanity her counterpart in the books never receives. This was especially evident in the scene leading up to this one, where she quietly mourns her monstrous son with surprising restraint and dignity. But if the show’s creators are trying to make Cersei a more accessible character, this is a risky and an uninspired way to do it. The problem isn’t that sexual violence exists on Game of Thrones, or even that it’s a significant part of the show’s landscape. The threat of rape is constant for the women and girls in this world, in a way that is both horrifying and completely realistic. What’s problematic here is the nonchalance. It’s a quick scene, one that’s not treated with any care or gravity.

Perhaps most puzzling of all is the episode’s director Alex Graves defending the scene. He told Hitflix that “it becomes consensual by the end, because anything for [these characters] ultimately results in a turn-on, especially a power struggle.”

This lack of basic understanding illustrates the biggest problem with a scene of this kind: words like “rape” and “consent” have definitions that are already fought over with distressing frequency. These definitions shouldn’t be further muddied by writers and directors who are willing to show initially non-consensual sex for its inherent shock value but who don’t know what they are trying to say about it. Refusing to define non-consensual sex as rape is irresponsible, and playing it off as just a regular part of a tempestuous romantic relationship is dangerous. The idea that something that starts off as rape can “become consensual by the end” is a nonsensical one, and should not be a part of our vocabulary when we talk about sex of any kind.

This is just a TV show, and not real life. But it's ignorant to act as if these kinds of attitudes don't inform the attitudes we have when we discuss real-life rape—a much more urgent, pressing threat than any of the others on the show. It's unlikely that very many Game of Thrones viewers will have to face warring dynasties in their real lives, or that they will ever encounter dragon attacks, or tribes of cannibals. But rape is not fantastical, it's not in the past, and it's not remotely removed from real life.

Still, although the indignant reactions to the episode are certainly not shared by all of the show’s viewers, there have been enough of them to set a somewhat encouraging precedent. This should be a wake up call for anyone considering a similar storyline: if you can’t render it sensitively, and if you aren’t clear on what you’re trying to say, then do not approach the subject of rape—not for shock value, not for sympathy, not to illustrate a troubled relationship. If even a ratings juggernaut like Game of Thrones is getting called on its missteps, we must be doing something right.