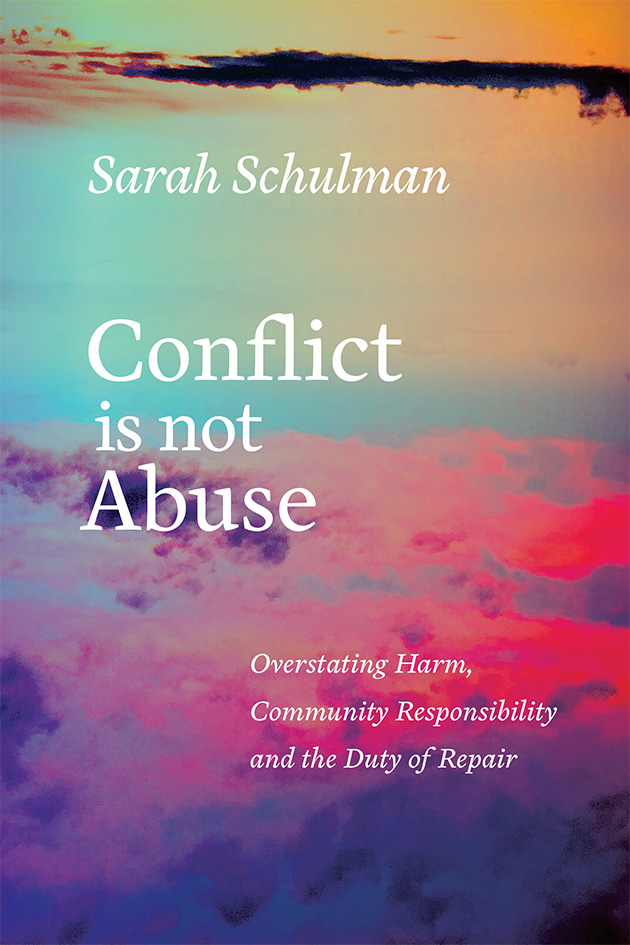 “I am 58 years old and I have never seen punishment do anything positive,” author and activist Sarah Schulman tells a crowd of bright-eyed young things squeezed into every inch of available space in Le Cagibi in early October. The juxtaposition of author and audience is endearing—Schulman’s demeanour is that of a curmudgeonly favourite professor, while the mass of twenty-somethings in front of her form a sea of asymmetrical haircuts and eagerly clutched notebooks. We don’t look like a group of people particularly inclined towards punishment and punitive justice, but that’s what we’re here to unlearn.

Schulman, a seasoned activist and prominent lesbian scholar, has a reputation that extends outside of academia—it’s not surprising that so many people have turned out to hear her speak. Over the past few decades, she has written numerous novels as well as books about Palestine and the AIDS crisis, worked extensively with LGBTQ rights groups such as Aids Coalition To Unleash Power (ACT UP), and taught English at the College of Staten Island. When I see her, she’s tackling the first half of a Montreal double bill, to be followed the next day with the official launch of her newest book, Conflict Is Not Abuse (Arsenal Pulp Press). The Cagibi event, while it acknowledges Schulman’s new book, is primarily a dialogue with local writer and artist Morgan M. Page called “Queer Conversations: Suicidality, Conflict and Repair.” Their subject matter is inspired by Bryn Kelly, a mutual friend, who took her own life in January of this year.

A trans woman whose writing touched on her life as an HIV-positive person, Kelly was well-liked on the internet as well as in her home of New York. Her death was a great loss to her family, friends and followers, but unfortunately was not a new phenomenon; the rates of suicide in the LGBTQ community are at a level often referred to as epidemic. It’s well documented that these incidents can have a knock-on effect leading to more deaths, both as a result of widespread media coverage and pain within our own personal circles. Most of the motivating factors for this take place on a level that many of us will never be able to influence, locked up in institutional poverty, medical negligence and various other forms of structural oppression.

Schulman, reading from the eulogy she wrote for her friend, asserts that one factor in Kelly’s death was the lack of “sophisticated” institutional care she received; in particular, the vehement transphobia that she faced when she sought mental health treatment.

Most of us—at least, those who do not work in these institutional settings—cannot do much, at least directly, to impact institutional harm. Instead, we have gotten into the habit of setting up parallel networks of care, ones that do an arguably better job of dealing with the complexity of overlapping oppressions and their consequences on health and well-being.

The problem with these parallel networks, says Schulman, is that they are not well-equipped to deal with conflict. Left-leaning communities are prone, she points out, to using anger and ostracization as an argumentative tool. We call on our friends to cut ties with a person we don’t like, giving no regard for that person’s social situation or access to resources outside of our community or friend group.

Schulman described Kelly as having no “system to tolerate frustration”—she sought care and had many loved ones, but her networks of support were either insufficient or unable to practically alleviate the effects of poverty and marginalization on her wellbeing. When this happens, Schulman says, we project our anger towards our friends and families, a process she calls “cumulative pain”—the product of “anxiety and oppression” turned outwards. In this context, day-to-day disagreements with friends and family soon feel insurmountable.

Schulman recounted a discussion that she and Kelly had had after one such incident of lashing out at the people that she cared about, attempting to analyze the reasoning behind those urges. Lacking proper services and care, Kelly’s pain was redirected as anger towards loved ones, “leaving the exterior structures of oppression fully intact, unburdened, and unaddressed.” It is Schulman’s belief that this “cumulative pain” affects marginalized communities on a large scale, colouring our interactions with each other when we should be striving for solidarity.

For her part, Page addresses the crowd: many of us, Page says, may have personal beef with other attendees—but we’re all equally in need of the conversation happening in this noisy café backroom. The current culture of shaming and shunning as a response to intracommunity conflict prevents us, she says, from building those kind of crucial social links, throwing out the opportunity to connect, teach and learn in favour of some vague notion of ideological purity and impurity.

As Schulman puts it, queer culture is locked in blame, constantly looking for someone to point out as the worst or the most problematic—this attitude is bound to burn us all out at some point.

The next night, at her launch, Schulman suggests that writing people off as irredeemable—something that often happens after a conflict online or offline—and knowingly cutting off their support systems when there is no immediate threat to your well-being is an echo of carceral justice. This approach, she says, prioritizes a need to feel vindicated after an offense, rather than a need to help or support.

While some audience members bristle at this—Schulman makes it clear that she thinks of this communication problem as generational, and is rather disparaging in her views about contemporary social justice culture—her call for increased understanding in our reactions is heard.

During the collaborative conversation, Page states a truth that everyone who has ever played keyboard warrior knows deep down: it’s easier to tear down individuals than it is systems of oppression, and part of our leftist political culture is hung up on that short-term satisfaction.

Hitting the bar post-reading, a friend and I reflect on Schulman’s advice to face problems head-on, rather than responding defensively as a matter of course. Both of us remember encounters that we handled poorly, many of which were exacerbated by a reactive social media culture that provides few resources for conflict resolution. Like many people our age, we learned to interact politically in a framework that is extremely unforgiving.

While it isn’t clear what Schulman constitutes abuse as opposed to conflict—she dodges those questions, refusing to speak in generalities and referring those who ask to read her book—it is certain that we need to find alternative ways to argue without imploding. So much of my early introduction to radical politics boils down to fighting with people who essentially shared the same views, with a cutthroat approach that left me unprepared to deal with conflict that arose within the small group of people who shared my exact philosophy. I lost many budding activist relationships to a world of my-friend-hates-your-friend animosity; many of these people are queer women I now keep tabs on through Instagram and Facebook.

In Cagibi, over the persistent whirr of a coffee machine, Page cites poet and activist Stephen Ira, saying it’s irresponsible of us to destroy one another when the community is in crisis—mainstream culture is already doing that work for us. Instead, we have a responsibility to learn how to deescalate conflict. Even, and perhaps especially, when it seems easier to turn away.