IN THE SUMMER OF 2008, Christina Strang arrived at Toronto’s Centre for Addiction and Mental Health for her first appointment in a decade. During the late 1990s, after a battery of interviews and tests, the Gender Identity Clinic (GIC) diagnosed her with “gender identity disorder.” Strang, a male-to-female transsexual, wasn’t crazy about the label, but needed the prize it provided: provincial funding for Sex Reassignment Surgery (SRS), which would save her $15,000. More importantly, it would bestow one thing she thought she needed to be happy: a vagina. 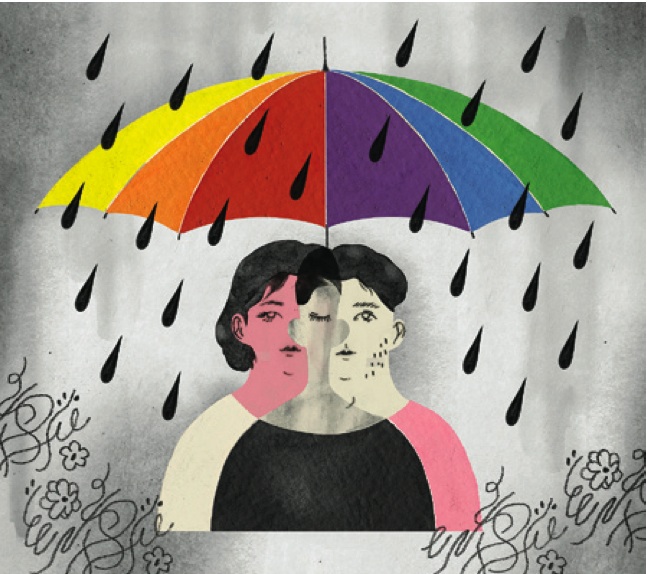 But just as Strang’s surgery was about to be approved, in 1998, the Mike Harris Progressive Conservatives delisted SRS from Ontario’s covered medical services. Not getting the funding was a huge blow for Strang. The cost of the procedure was entirely beyond her means. Her social-service jobs did not burden her with excess income, and her then-partner, now wife, was still in medical school. But rather than get frustrated, Strang moved on. She lived as a woman, her fashion choices evolving from goth chick to Earth mother. She also became a community advocate and organizer.

A decade later, openly gay Liberal health minister George Smitherman announced that Ontario would again pay for SRS at an estimated cost of $200,000 annually. Strang’s file was dug out of storage at the GIC, and there she was again, wondering what new obstacles the experts would put in her way.

“She asked me flat out if I wanted a vagina, yes or no, just like a note in high school: ‘Do you like me, yes or no?’” says Strang, now thirty-four, recalling her do-over interview with the same GIC staffer. “Then we talked about kittens and cats for twenty minutes. I left wondering what was the point of it. What seemed so ominous and scary back then now seemed like a sad, pathetic joke.”

During the delisted decade, Strang changed. So did the trans community. The Harris decision triggered protests, letter-writing campaigns, court cases and human-rights complaints. Lots of people suffered. But when SRS had been covered, candidates paid a price in other ways. They were straightjacketed by strict criteria set out by the agency that held the purse strings, the Clarke Institute of Psychiatry (since merged into the Centre for Addiction and Mental Health). SRS candidates were required to live as their chosen gender for two years without the help of hormones, which made it harder for more masculine patients to pass as female. SRS candidates were also expected to aspire to “normality.” For male-to-female transsexuals, that meant growing your hair long, acting like a “lady” and going straight.

The GIC—often referred to by its old name, the Clarke—had a monopoly on transsexuality because it dangled the golden ring. When the funding was taken away, so was the need to conform, to be the “ideal” transsexual in a psychiatrist’s eyes. You could get hormones from a sympathetic general practitioner or through underground networks. Breast implants, should you want them, weren’t so expensive and, in daily interactions, often more helpful than a vagina. You may not be able to change the gender on your birth certificate, but you could change your name. Or not. Without a gatekeeper, people could also follow more idiosyncratic paths. Keep a male name but get breasts. Take hormones to soften the features, but stay flat-chested. Trans culture, especially in Toronto, came into its own.

JUST AS GAYS AND LESBIANS in previous generations sought refuge in certain professions—media and hairdressing come to mind—urban health and social service organizations have absorbed increasing numbers of trans people who have their own ideas about what trans culture needs. Strang herself ran Meal Trans, a drop-in program for lower-income, homeless and sex-working trans people, in Toronto’s gay village. Founded in 1998 as a peer-run service, Meal Trans’ offerings—sometimes social, sometimes legal and sometimes just a good meal—have shifted according to feedback from clients, much to the shock of clients themselves. “The idea that trans people have knowledge themselves is a new concept,” says Kyle Scanlon, a transsexual man who coordinated the program until this January.

In 2003, when the Sherbourne Health Centre opened in downtown Toronto to serve the lesbian, gay, bisexual and trans (LGBT) community, it was a perfect opportunity to put this new confidence to work. The centre can’t approve SRS funding, but it provides counseling and hormones. Unlike in GIC sessions, not everything you say goes on your file. Sherbourne also understands that trans health doesn’t begin and end with SRS. Its staff know to ask trans men about pap smears, for example, and it hosts a support group for those grappling with the social side of transitioning to a new gender.

“We had a working group of trans people design the protocols of how they wanted to be addressed and served,” says Anna Travers, director of LGBT services at Sherbourne. “It’s a change for people who had been seen at a gender identity clinic, which tends to identify them as someone who needs a specialist team.”

The GIC often finds itself cast as the bad cop, thanks to an SRS approval process that still requires transsexuals to audition as the opposite sex for two years without hormones. Even those who lived as their chosen gender for most of the delisted decade are forced to document “real-life experience” for one more year before getting the go-ahead. “Sending somebody, after just one appointment, for that kind of life-altering surgery is not a good idea,” says GIC coordinator Maxine Petersen, herself a trans woman. “If we haven’t seen somebody for ten years, we would want to follow people for a year to make sure they’re committed to it, and so we get to know them better.”

Despite undercurrents of rivalry, Sherbourne and the GIC are working together to develop new standards of care. There’s also talk of giving Sherbourne, and perhaps other health centres outside of Toronto, the authority to green-light government-funded SRS. And with good reason; Petersen is swamped. The GIC authorized thirty-eight surgeries in its first year back in the approval business. The waiting list has jumped from about two months to more than six months, even though staff see three times as many people each week as they did between 1998 and 2008.

Petersen attributes the high volume mostly to the decade-long backlog. While that is probably true, many at Sherbourne sense that more people are coming out as trans, particularly those who were born female but identify as men. According to older transsexuality studies, male-to-female (MTF) transsexuals outnumbered female-to-male (FTM) transsexuals by as much as four to one. At the GIC, Petersen puts the ratio at about 2.5 MTFs for every FTM. But of the five hundred registered clients at the Sherbourne, Travers estimates the ratio is close to fifty-fifty. This means that, thanks to the delisted decade, the two organizations are serving two different trans populations that only partially overlap. And as the trans community evolves, its needs grow more complex.

“TRANS” stands not only for “transsexual” but also “transgendered,” an identity much harder to pin down. A transgendered person might be born with a penis, identify as a woman and forgo surgery. He might exhibit characteristics of both genders—breasts and facial hair, say—or change presentation depending on circumstances.
Tensions have long split what one might consider old-school transsexuals—“Clarkeites,” as Strang calls them—and the newer wave of transgendered folk. Clarkeites tend toward the traditional: matronly, long hair, flowered dresses. They sometimes complain that transgendered people, with their penchant for flouting gender norms, confuse mainstream society and hurt the community’s credibility. Meanwhile, transgendered people accuse the Clarkeites of playing to stereotypes just to qualify for SRS. For example, in GIC appointments, SRS candidates often deny any same-sex (that is, same chosen-sex) attraction, for fear clinicians will doubt their transsexuality.

Petersen says that, during the delisted decade, transsexuals still used the GIC to help validate themselves to employers, friends and family; a visit to the GIC made their identity official. But many transgendered people, as well as younger transsexuals, have no such compunction. They pass over the GIC’s experts for more open-minded doctors. “I expect that the Sherbourne would see people who want less than what we have to offer,” says Petersen. “You wouldn’t need to come to us if you just wanted hormones. There are plenty of physicians who would prescribe for them.”

But for many, when the government stopped covering SRS, “less” was the best they could hope for. Outside the bedroom, one’s clothes, facial hair, chest, voice and attitude are the biggest contributors to how others see gender. And the hormones, breast surgery and electrolysis that affect those factors have never been covered by Ontario Health Insurance. The difference between SRS-track transsexuals and transgendered people shrunk dramatically. By choice or not, everybody was in the same boat.

The de-emphasis on SRS may even account for some of the increased numbers of trans men who have come out over the last decade. Trans men were never so invested in genital surgery, because the results were considered less satisfying than the vaginoplasty pursued by trans women. In a sense, they were always outsiders to the Clarke system. But now, with SRS off the table, they could claim trans women as outsider comrades. The two groups had more in common, working together on issues like anti-violence, legal rights, the education of health professionals and broader social acceptance.

It would be wrong to say that the trans community has outgrown turf wars and factions, just as it would be wrong to say everybody in the broader queer community is on the same page. But there is now a greater sense of a collective agenda. The board of Egale Canada, which, in the early 2000s, was criticized for giving excessive attention to same-sex marriage, has made trans issues one of its top priorities. In 2009, activists held the first-ever Trans Pride March during Toronto Pride Week. Organizer Karah Mathiason expected a few hundred marchers; she got more than one thousand.

Not everybody grew stronger during the hard times. Some moved to other provinces like British Columbia and Quebec, where SRS was covered. Then there were those who couldn’t endure the wait. (Studies generally indicate that between 30 and 50 percent of trans people have attempted suicide.) “During that ten years there were a lot of people who had no sense of hope,” Petersen says. “The fact that the funding has been restored is a significant step forward in giving people that possibility.”

At twenty, Tera Mallette had tried to transition on her own through hormones, electrolysis and clothing, but “failed miserably.” She hadn’t quite figured what kind of woman she was: “I had no fashion sense, no identity and no empathy for the situation.” She tried again at twenty-four through the GIC, and, like Strang, was partway through her real-life test when SRS was delisted. Now a thirty-five-year-old MTF, Mallette went back to the GIC last year only to be told that she’s still required to do another year of her real-life test—despite having lived as a woman for the last decade.

It’s a pain, says Mallette, but the GIC requirements no longer “intimidate” her. Mallette may have an unladylike attraction to videogames, military-style clothing and women, but she no longer feels the need to hide them from the GIC. Its role in her life is no longer existential—is she a woman or isn’t she?—but purely pragmatic.

“When I was younger, I thought transitioning was magic. You take the hormones and suddenly you’re a hot chick. Unfortunately, there is no magic wand,” says Mallette. “I still want surgery, but now I think of how it would make my clothes fit better.”

—The Case of Caster Semenya
—Old Gays
—The X-Factor